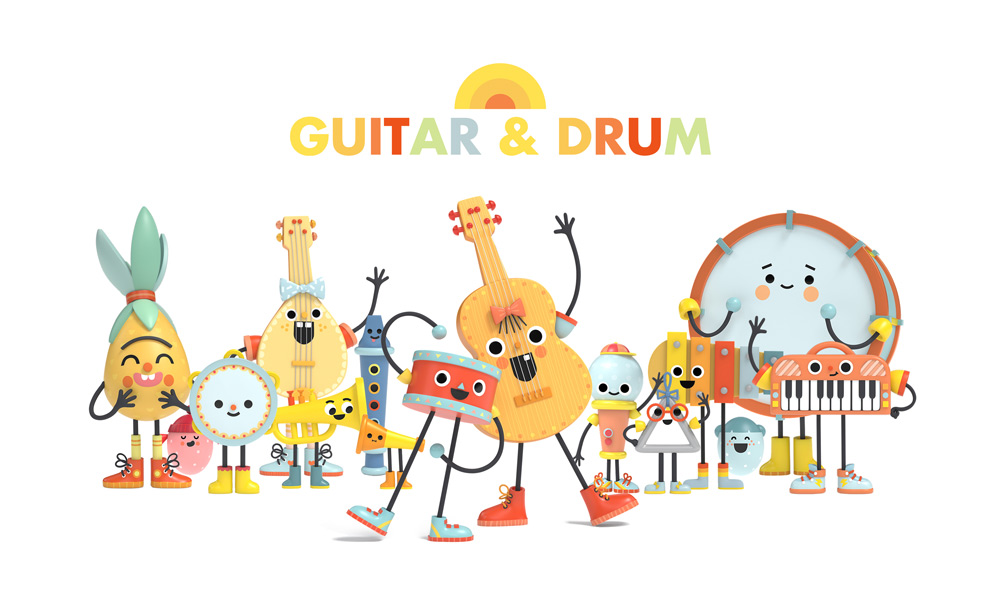 Guitar and Drum, a new animated series produced by Punkrobot (Chile) and Hype (Brazil), will air on Disney Channels Latin America. The show is directed by Antonia Herrera and María Elisa Soto-Aguilar, both partners at Punkrobot, the studio behind the short film Bear Story (2014), which made history in 2016 as the first Latin American animated short Oscar winner.

Guitar and Drum is a preschool TV series for boys and girls 3- to 6-years old. Each episode is 5 minutes long, and 52 episodes are being produced. The show tells the story of Guitar and Drum, two musical instruments who are best friends. They live in a small town with other musical instruments, where they go around having simple, everyday adventures with their friends.

In line with Disney’s commitment to promote diversity and inclusion through stories, characters, products and entertainment experiences, Guitar and Drum is all about showing how our differences make us special. The animated series illustrates Disney’s commitment to offer content that reflects the world around us and that kids can relate to by representing diversity from several perspectives: from cultural aspects to personal abilities, different genders, particular tastes, etc. Also, the episodes reinforce concepts such as self-esteem, empathy, friendship and teamwork, among many others. In doing so, it seeks to positively inspire kids to build a better world, cherish diversity and to respect each other.

“Guitar and Drum is a very special project for us,” said Herrera and Soto-Aguilar. “It’s not only the first show we direct, it also has a powerful message of acceptance, respect towards others, and empathy. Hopefully it will inspire children to be kinder to one another, and to see each other’s differences in a positive light. We wanted to make a show about a diverse group of characters, both male and female, learning to get along and play together in a fun, respectful way.”

“Preschool series usually send a positive message and one of the flagships of our show is to promote diversity: understanding other people and the value of diversity is key. This is the core of our show,” explained the Brazilian producer, Gabriel García. Fun, music and dancing are also a huge part of the show. “Technically, Guitar and Drum is really simple and clear so the kids can understand and relate to it. The aesthetic is minimalistic, but with a strong message behind it.”