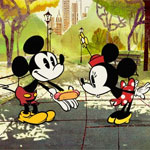 Mickey Mouse is ready for his major comeback. On Friday, June 28 at 8:30 p.m., Disney Channel will debut a new 2D-animated short featuring the studio’s classic icon. Two other shorts will also debut on Saturday, June 29 and Sunday, June 30th.

With the slapstick feel of classic Mickey Mouse and contemporary direction and pacing, the series of cartoon shorts presents Mickey in a broad range of humorous situations that showcase his pluck and rascality, along with his long-beloved charm and good heartedness. Each cartoon short finds Mickey in a different modern setting including Santa Monica, New York, Paris, Beijing, Tokyo, Venice and the Alps, facing a silly situation, a quick complication and an escalation of physical and visual gags. The stories also feature genuine heartfelt and heroic moments as Mickey explores and experiences life with his comical partners: Minnie Mouse, Donald Duck, Daisy Duck, Goofy and Pluto.

Among the cartoon premieres are “No Service,” in which Mickey and Donald try to buy lunch from a beachside snack shack but are unceremoniously turned down because of the classic “No shirt, no shoes, no service” admonition, Friday, June 28; “Yodelberg” where Mickey longs to visit Minnie atop her mountaintop chalet but quickly realizes that the threat of avalanche has made the trek up the mountain more challenging than usual, Saturday June 29; “New York Weenie,” where the hot dog Mickey buys for his beloved and very hungry Minnie ends up taking him on a energetic chase through New York’s Central Park, Friday July 5; “Tokyo Go,” which finds Mickey fighting Tokyo’s crazy commuting crowds aboard the bullet train, Friday July 12; and “Stayin’ Cool,” in which Mickey, Donald and Goofy must find creative ways to keep cool on the hottest day of the year, Friday July 19.

An early sneak preview of the first cartoon short, “Croissant de Triomphe,” in which Mickey must deliver croissants to Minnie’s cafe, battling street traffic and other Parisian obstacles along the way, debuted in March 2013 on Disney.com.

Geared towards kids age 6-14 and families, and produced in 2D animation, the design esthetic for the cartoon shorts reaches back to Mickey’s roots and borrows reverentially from the bold style of his 1930s design, but not before adding a few contemporary touches. Designs for other characters have a similar approach, favoring a “rubber-hose” cartoon style for more exaggerated animation. Background designs closely reflect the graphic design sense of 1950s and 1960s Disney cartoons. For those true eagle-eyed Disney fans, the production team has also included the occasional homage to other icons from the storied Disney heritage. 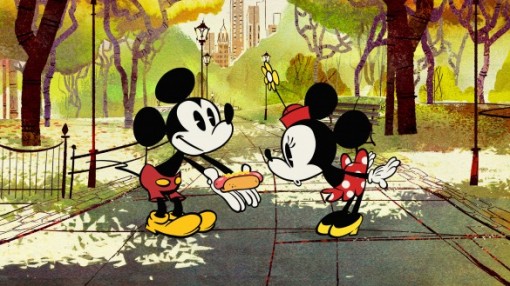