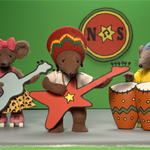 How can you not love a stop-motion preschool show about a kind, raggae-singing Rastafarian mouse whose motto is “Making a bad ting good!” Kids worldwide are bound to fall for the new series Rastamouse, which is being distributed by DHX Media outside the U.K. Today, the company announced that it has sold the show to Australia’s ABC TV, Poland’s Canal+ (MiniMini) and Israel’s HOP!

Commissioned by the CBeebies, the 52X11 series is produced by Three Stones Media with Dinamo Productions and Little Roots. The show will premiere in the U.K. on CBeebies in the first quarter of 2011.

The show is based on the books by Michael De Souza and Genevieve Webster. It follows the adventures of Rastamouse, Scratchy and Zoomer—a crime-fighting, mystery-solving, special agent, reggae band. (They believe in redemption not retribution and they go about helping bad guys rebuild their lives!)

Greg Boardman, exec producer at The Rastamouse Company notes, “The sales Rastamouse has achieved to these international territories are fantastic. It’s clear there is a space in the kids market for a show like Rastamouse—which has heart, humor and fun at its very core. We look forward to building the brand with our partner DHX as the program is picked up worldwide.”

To learn more about this clever show, visit www.rastamouse.com.

You may also like...
Related Topics:DHX Media, Global, Rastamouse, Sales

Oscar Hopeful ‘The Gruffalo’ Premieres on ABC Family
‘The Dreams of Jinsha’ Opens in L.A.