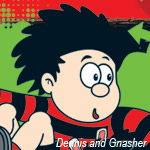 Scheduled for delivery in mid-2013, the new series (52×12 / 26 X 24) renews the partnership with rights owner DC Thomson. The series is based on the beloved comic-book characters from U.K. favorite, The Beano, which celebrates its 75th anniversary in 2013.

The co-production has been commissioned by CBBC and the Nine Network and will be produced by Sueann Smith for Red Kite Animations and Jane Schneider and Stu Connolly for Sticky Pictures.

Dennis the Menace, who first appeared in The Beano in March 1951, is the longest-running strip in the weekly comic. Dennis is the biggest menace in Beanotown, always on the hunt for fun and mischief with his loyal companion Gnasher. Together with their best friends Curly and Pie Face, Dennis and Gnasher believe the world is their oyster and much to the dismay of Beanotown’s wider community; a place where they often cause mayhem and disorder.

“Dennis and Gnasher has resonated with children and families around the world and we are excited to be a part of this continuing grand adventure,” says Donna Andrews, CEO and partner, Sticky Pictures.

“We’re delighted that Dennis and Gnasher is returning to CBBC,” says Melanie Halsall, executive producer, CBBC. “It’s a great show with fantastic characters and we are sure that this series is going to be bigger, better and more menacing than ever before.”