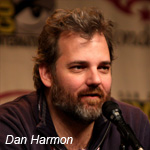 “I’d been talking to Adult Swim for a long time,” he said. “I’ve always admired the things they were doing over there, and it was just a matter of when the right project would come along. My insecurity about getting older and getting hackier made doing something on Adult Swim a practical choice. I was incredibly attracted to the idea of finding the semi-marketable version of these characters, so we started talking about it and came up with this stuff.”

He said his new show was influenced by his favorite British science fiction material such as Douglas Adams’ The Hitchhiker’s Guide to the Galaxy, that he grew up reading, as well as Dr. Who. He also noted that he loves doing animation because of the medium’s inherent possibilities.

“You can make a banana purple. You can put three hats on a cowboy. That would require several days of stitching, in live-action, that you wouldn’t be able to afford. I mean, you can just do tons and tons and tons. The funny thing to me is actually where the similarities are – where it actually is just as inconvenient, for instance, to blow something up in animation. Explosions, if you want to make them look good, need more frames drawn. It’s just as inconvenient to fill a room with extras because some artist has to character design each extra. You think, as I did, going into animation from live-action, that everything costs the same. It’s all a bunch of drawings, but you very quickly learn that you do have to be strategic about your research.”

Harmon called Mike Lazzo “a bonafide, actual genius, especially in the world of network executives.” He noted, “He has the autonomy, the humility and the mental power to actually take a script, recognize it for what it is, which is a document with words on paper, read it, and then tell you what his reactions were to it, as an individual. Those are his notes. He says, ‘On page 17, as I was reading this document, I lost the story right here. Maybe that’s because I was driving to work while I was reading it, or eating a sandwich, or maybe I don’t have the right sense of humor.’ He never says, ‘I don’t think people are going to like this.’ He never branches out into the business of speculating about this bio-mass for which we are creating it. He never goes, ‘People are going to respond this way, when this happens.’ And he also never confuses the script for the finished product. He gives script notes on the script. He gives editorial notes on the animatic. Then, he gives final notes. Every once in a while, there’s one we don’t agree with, but that makes us just want to make him happy.”

“My job, as the part of the studio that’s producing Rick and Morty, is to supposedly protect Justin [Roiland] from the big, bad suits, which don’t exist at Adult Swim. And as a writer on Rick and Morty, my job is just to help Justin jar up his insanity. I’m actually the guy that’s the agent of compromise. Justin’s ideas are insane, and I try to infuse them with story and character, and stuff like that.”

In turn, Roiland, who also plays Oscar on Disney Channel’s Fish Hooks and the Earl of Lemongrab on Adventure Time, also praised his partner at TCA.

“He’s a talented, genius writer who writes some of the best dialogue I’ve ever read.”

Rick and Morty will join the Adult Swim lineup in the fall. The toon follows the misadventures of a genius inventor and his much-less gifted grandson, who are both voiced by Roiland. Harmon, Chris Parnell, Sarah Chalke, Spencer Grammer, Brandon Johnson and Karie Wahlgren round up the toon’s voice cast. 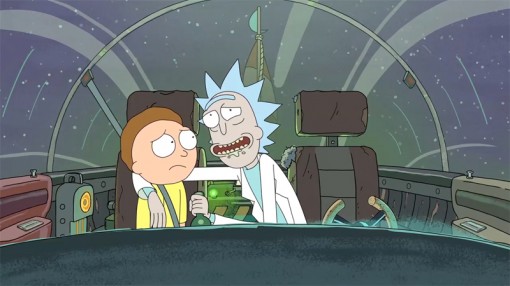 ‘Wolverine’ Claws His Way to No. 1 Spot
RAI Greenlights Third Season of ‘Amita’