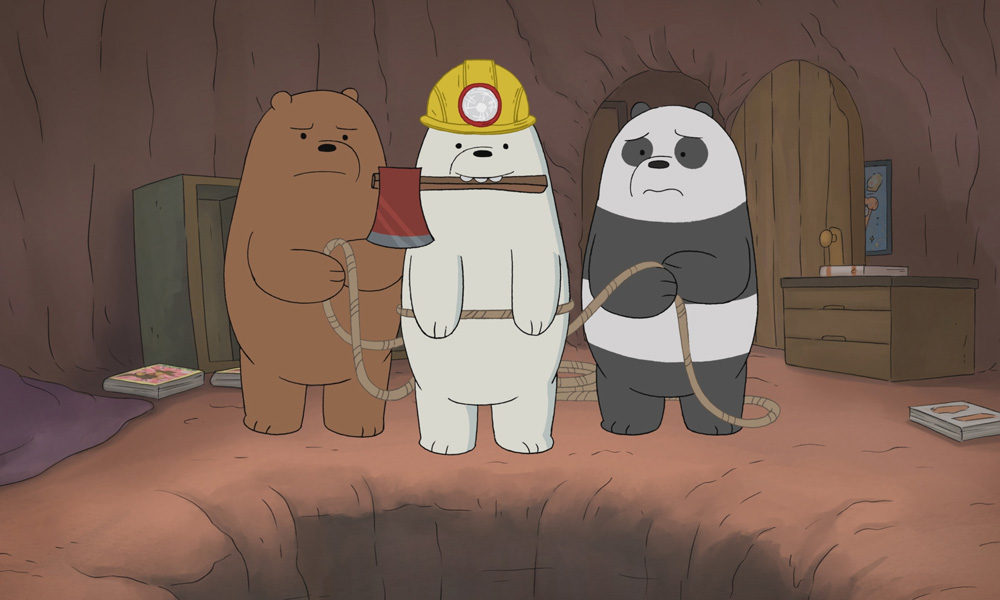 Cartoon Network is planning a month-long Valentine for its fans in February, presenting episode premieres for hit series Craig of the Creek, Teen Titans Go! and We Bare Bears every Monday night, and new adventures for Unikitty! every weeknight. The fun kicks off Monday, Feb. 4 at 5 p.m. (ET/PT) with “Deep Creek Salvage,” an all-new episode of Craig of the Creek. Then, guest star Will Arnett (The LEGO Movie, The LEGO Batman Movie) will reprise his iconic voice role as LEGO Batman in “BatKitty,” a special episode of Unikitty! premiering 5:30 p.m. And Grammy winner Estelle guest stars as pop star Estellar in We Bare Bears “The Mall,” airing at 7 p.m.

Saturday, Feb. 2
7 a.m. (ET/PT) Bakugan: Battle Planet “Home on the Run / Top Slot” We are introduced to Shun’s mysterious backstory, his relationship with his industrialist father and desire for a more closely knit family. Then, Dan and Shun butt heads on how best to make the AO a real team amidst growing threats.

9 a.m. (ET/PT) Total DramaRama “A Licking Time Bomb” Owen and Noah unwittingly become cookie moguls and must hide the secret ingredient, which is Owen’s spit from licking the sprinkles off the cookies.

Monday, Feb. 4
5 p.m. (ET/PT) Craig of the Creek “Deep Creek Salvage” The Trio finds gold in the muddy depths of the Creek so Craig builds a rig to recover it.

5:30 p.m. (ET/PT) Unikitty! “BatKitty” Unikitty takes on the persona of Batman and begins to fight crime. When she accidentally causes Master Frown to step up his crime game, she will need the help of her friends, dressed as Robin, to stop him. Will Arnett guest stars as LEGO Batman.

“Pool Duel” Unikitty and the gang are having a great time at the public pool, until they try to get Puppycorn to swim in the deep end with them.

6 p.m. (ET/PT) Teen Titans Go! “Nostalgia Is Not a Substitute for an Actual Story” The Titans time travel back to the 1980s to determine whether or not it was the best decade ever.

Tuesday, Feb. 5
5:30 p.m. (ET/PT) Unikitty! “Tooth Trouble” Puppycorn loses his first tooth and Unikitty’s excited for her little bro, now he​ ​gets a visit from​ ​the​ ​legendary Tooth Fairy!​ ​But when the Tooth Fairy is a no-show, Unikitty and her friends take on the mantle and responsibilities.

“This Spells Disaster” The gang is planning a surprise for Puppycorn, so they spell things out when talking so he won’t find out. Desperate to know what they’re saying, Puppycorn finds a magic book that he thinks will help him learn to spell.

Wednesday, Feb. 6
5:30 p.m. (ET/PT) Unikitty! “Roadtrip Rukus” Richard has decided to take Unikitty and the gang for a pleasant and relaxing 10 hour road trip. Unfortunately, their idea of fun is not Richard’s and he soon begins to give in to his inner road-rage.

“Memory Amok” When Puppycorn witnesses Unikitty do the most embarrassing thing ever, he vows he will never forget it. Desperate, Unikitty uses Dr. Fox’s memory machine to erase Puppycorn’s memory of the embarrassing event.

Thursday, Feb. 7
5:30 p.m. (ET/PT) Unikitty! “Election Day” In an effort to prove to Master Frown that she is no tyrant, Unikitty agrees to hold an election to see who will be the new princess of the Unikingdom.

“No Sleep Sleep Over” It’s a sleepover at the castle and Unikitty and Puppycorn want to stay up all night, believing something magical must happen if you stay up long enough.​

Friday, Feb. 8
5:30 p.m. (ET/PT) Unikitty! “Unfairgrounds” (half-hour special) Unikitty and her friends have an exciting day at their favorite amusement park but Frown and Brock are there to ruin their good times and drive everyone out! Can the friends save the park and find out Master Frown’s secret ​motives?

Saturday, Feb. 9
7 a.m. (ET/PT) Bakugan: Battle Planet “Fathers and Friends / Midsummer Nightmare” Drago and the other AO Bakugan face an unseen threat with earth shattering power only to be left wondering if it was all a dream. Then, Osamu Kazami comes to take his son Shun back home and finds a defiance he hadn’t counted on.

Sunday, Feb. 10
6:30 a.m. (ET/PT) Mega Man: Fully Charged “Chill Out, Bruh” Aki and Suna take a rehabilitated Ice Man out for a day in the city, but things take a turn for the worse as he misinterprets their cues and turns a game of hover hockey into a literal freeze out!

Monday, Feb. 11
5 p.m. (ET/PT) Craig of the Creek “The Shortcut” An unusually hot day at the Creek melts all of Kit’s ice pops, so Craig helps her find a shortcut to her frozen snack supplier before everyone else melts.

5:30 p.m. (ET/PT) Unikitty! “Kitty & Hawk” When Puppycorn’s favorite toy goes missing, Unikitty & Hawkodile team up to track down the thief, buddy-cop style! But when things get tough and the case goes cold, now it’s not just their partnership on the line, but their friendship!

7 p.m. (ET/PT) We Bare Bears “Tunnels” The Bears discover a network of tunnels underneath the cave. Are they prepared to discover where they lead to and who dug them?

Tuesday, Feb. 12
5:30 p.m. (ET/PT) Unikitty! “Camp Unikitty” The gang’s set for a weekend of glamorous, easy-living camping! But when Hawkodile challenges their idea of camping, the gang switch places, with Hawkodile living a luxurious glamp life while Unikitty and the others survive in the wild.

Wednesday, Feb. 13
5:30 p.m. (ET/PT) Unikitty! “Hawkodile Sensei” On a mission, Hawkodile finds some defenseless chipmunks that imprint on him.​ ​The bird bodyguard takes it upon himself to become their Sensei to teach the younglings his warrior ways, but Unikitty worries his training is too intense.

Thursday, Feb. 14
5:30 p.m. (ET/PT) Unikitty! “Perfect Moment” When Hawkodile admits his love for Dr. Fox, Unikitty and the gang become his love gurus to help him confess his feelings for her. Unfortunately, Unikitty’s grand plans for the perfect moment of love complicates everything.

Friday, Feb. 15
5:30 p.m. (ET/PT) Unikitty! “P.L.O.T. Device” When boredom levels in the castle hit dangerously high levels, Dr. Fox conveniently introduces her P.L.O.T. Device to make life more exciting. Richard warns that this might be dangerous, but no one listens.

Saturday, Feb. 16
7 a.m. (ET/PT) Bakugan: Battle Planet “Dawn Before Dusk” AO meet Benton Dusk discovering that their quiet little corner of the world is about to become larger. Then, Benton Dusk reveals AO have been identified as persons of interest by powerful corporations including Philomena Dusk’s AAAnimus.

9 a.m. (ET/PT) Total DramaRama “Toys Will Be Toys” Courtney becomes a toy tester but forgets that the most important thing is to have fun.

Monday, Feb. 18
5 p.m. (ET/PT) Craig of the Creek “Dibs Court” When a kid claims dibs on the Stump, Craig has no choice but to take them to court. Dibs Court.

5:30 p.m. (ET/PT) Unikitty! “Who Took Toast” When Toast disappears from Unikitty’s party she leads a search to find him and expose the toast-napper.

6 p.m. (ET/PT) Teen Titans Go! “Genie President” Robin hatches a plan to get rich off pennies, but Starfire believes they are magical.

7 p.m. (ET/PT) We Bare Bears “Ramen” The Baby Bears help a struggling ramen chef perfect her ramen and save her shop.

Tuesday, Feb. 19
5:30 p.m. (ET/PT) Unikitty! “Rainbow Race” In an attempt to cheer up the citizens of the town, Unikitty and the gang load a rainbow into a tanker truck with the intention of releasing it over Frowntown. Now they must avoid the marauding Master Frown in his monster truck, to succeed.

Wednesday, Feb. 20
5:30 p.m. (ET/PT) Unikitty! “Beep” To help combat bummer feelings, Unikitty’s installed Bad Vibe detectors throughout the castle. But soon, annoying beeping detectors fill the halls, and they can’t find the source of the bad vibes or shut off the sound!

Friday, Feb. 22
5:30 p.m. (ET/PT) Unikitty! “Lazer Tag” When the Score creeper traps Unikitty and the gang in his laser tag arena the gang must defeat the house team or be imprisoned forever.

Saturday, Feb. 23
7 a.m. (ET/PT) Bakugan: Battle Planet “Stratified / Maze Daze” AO embark on a mission into the mysterious labyrinth world of Vestroia to find Strata the Hunter and free the Bakugan he has imprisoned. Then, the AO encounter powerful forces that seem to be struggling for control over the alien landscape.

9 a.m. (ET/PT) Total DramaRama “All Up in Your Drill” Duncan stages a small coup to oust Courtney as their official class firefighter so that he can wear the shiny firefighter helmet – until he smells smoke in the classroom and begs her to take her job back.

“This One Goes to 11” During one last stop by a toy store before Ben, Gwen, and Grandpa Max’s maiden voyage across the Atlantic, Ben runs into an old bully, Kevin 11, who now his own, evil version of the Omnitrix.

Monday, Feb. 25
5 p.m. (ET/PT) Craig of the Creek “The Great Fossil Rush” JP finds a fossil in the Creek which quickly causes the landscape to change.

5:30 p.m. (ET/PT) Unikitty! “Trapped in Paradise” Unikitty and the gang have crashed on a fabulous island and no one wants to leave until Richard convinces them that they need to return to the Kingdom and deal with their responsibilities.

6 p.m. (ET/PT) Teen Titans Go! “Tall Titan Tales” Robin tries to tell some tall tales but the other Titans give their own fractured versions instead.

Wednesday, Feb. 27
5:30 p.m. (ET/PT) Unikitty! “First Flight” The gang is taking an airplane trip together, and Hawk is at the helm taking his captain’s license test. However, Richard is terrified of flying, so Unikitty and Puppycorn spend the flight trying to help Rick conquer his fear of flying.

Thursday, Feb. 28
5:30 p.m. (ET/PT) Unikitty! “Ragtag” When the kingdom runs out of inspiration, Unikitty takes it on herself to re-inspire the citizens with a riveting game of kickball.