Tricon Kids & Family’s award-winning, original animated comedy Counterfeit Cat (52 x 11, plus 11 x 2) is sinking its claws into the global broadcast scene. The 2D series is coming to Disney XD and Disney Channel in multiple territories — including France, Southeast Asia, Japan, Australia/New Zealand and Latin America — following its world premiere on Disney XD UK this May and Disney XD US premiere in June.

The show has also launched on Disney XD platforms including the app and video-on-demand, and will be pouncing on unsuspecting Canadians this year through Teletoon.

Counterfeit Cat is the story of an unconventional friendship between a lazy, selfish house cat and an excitable, naive alien with a mysterious destiny and a homemade purple cat suit. Gark is a small blue alien in a purple cat costume. Max is a real cat: fat, fluffy, yellow and constantly pampered by his doting owner Betty. When Gark crashes his spaceship into Betty’s laundry room, he finds a new home and forms an unconventional friendship with Max, who quickly learns how to take advantage of Gark’s mysterious alien powers and his sweet, trusting nature. 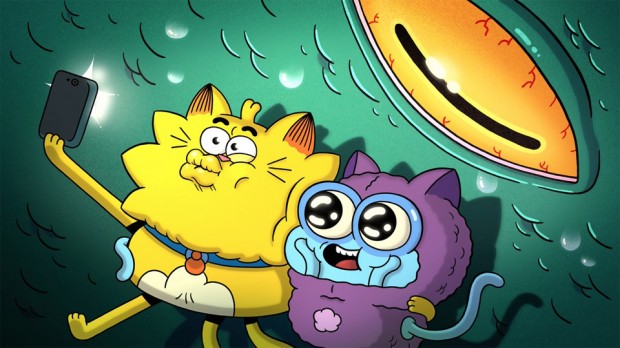