Tricon Kids & Family and Wildseed Kids have sold animated shorts series Counterfeit Cat to Disney XD for broadcast in the U.S. The comedy spots will debut on Monday, June 20 at 12:30 p.m. ET on Disney XD and its multiple platforms, including app and VOD. You can also get a feline fix at counterfeitcat.com.

The series follows the adventures of Max and Gark. Gark is not a real cat, he’s a Counterfeit Cat. He’s a small blue alien in a purple cat costume. Max is a real cat: fat, fluffy, yellow and constantly pampered by his doting owner Betty. When Gark crashes his spaceship into Betty’s laundry room, he finds a new home and forms an unconventional friendship with Max, who quickly learns how to take advantage of Gark’s mysterious alien powers and his sweet, trusting nature. Max loves having an admirer who will do anything for him, but Gark’s extreme curiosity and lack of understanding about life on Earth push Max out of his comfort zone and into ridiculous hair-raising adventures. Whether they are just hanging out at home or zipping through space and exploring new planets, Gark’s adventurous instincts will force Max to become the hero Gark believes him to be. 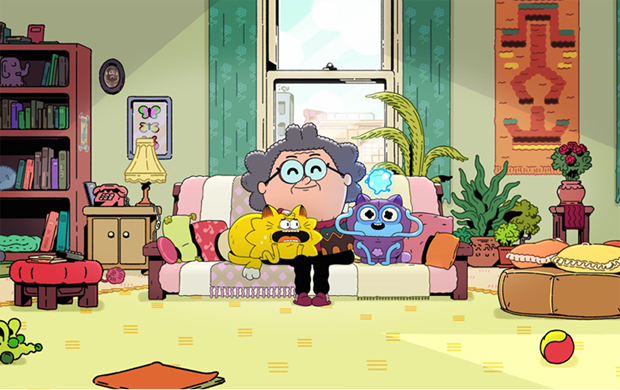