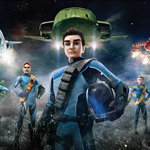 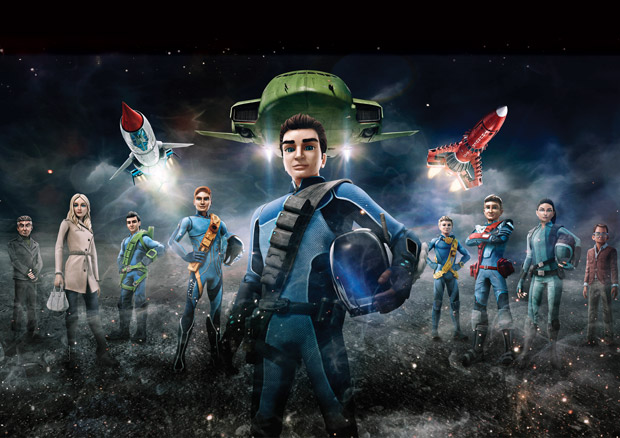 ITV and Pukeko combine miniatures and CG animation to propel a unique look for a rebooted classic in Thunderbirds Are Go!

Few who saw the iconic 1960s series Thunderbirds can forget the excitement that creators Gerry and Sylvia Anderson brought to the most-beloved of their “Supermarionation” series, making the cult British show a prime candidate for revival. But remaking a series that used puppets in miniature sets and vehicles for a modern audience is a challenge that required a great deal of patience and ingenuity on both the creative and technical ends.

As with the original, ITV Studios’ Thunderbirds Are Go! tells the tale of the amazing Tracy brothers — Scott, Virgil, Alan, Gordon and John — each the pilot of an amazing advanced Thunderbird craft that are the fastest and most unique vehicles on earth. Based in the South Pacific on Tracy Island, they together work as International Rescue, saving the day when no one else can, with the help of security chief Tanusha “Kayo” Kyrano, engineer Brains and their London agent, Lady Penelope.

Executive produced by ITV Studios and Pukeko Pictures, Thunderbirds Are Go! mixes live-action and CGI in a new way that has connected well with audiences since the 26-episode first season began airing in April in the U.K.

Giles Ridge — executive producer on the series, along with Estelle Hughes, Richard Taylor and Andrew Smith —says being asked by ITV managing director Julian Bellamy to assemble a team to remake the classic series was a “once-in-a-lifetime opportunity.”

“It filled me with, on one hand, complete excitement and, on the other, complete apprehension, having to do what I call trading the family silver,” he says.

The new show needed to strike a balance between pleasing the many passionate fans of the original series and appealing to its primary audience of modern kids — most of whom will have never heard of or seen the original.

Ridge says a deep look at the concept of the original revealed a strong basic concept. “When you look at the DNA of Thunderbirds — five young, aspirational brothers on a secret hideaway island with the most incredible craft at their disposal helping people around the world — it’s not a bad place to start.”

But pulling off a series worthy of the original required a diverse skill set that sent Ridge looking for partners outside of the typical co-production boundaries.

“I didn’t want the production to be limited by having to work in certain territories. I wanted to be able to choose the talent where I felt that the talent best served the show,” he says.

For the writing, Ridge went to the United States and tapped as head writer Rob Hoegee, a veteran animation writer and producer well versed in the boys action genre from stints on shows such as Teen Titans, Generator Rex and Slugterra.

“This is Thunderbirds for a new generation, really, but in the grand scheme of things, we are maintaining the core values of the original show: selfless heroism and a family who works together,” says Hoegee.

Ridge says the show sticks closely to the basic episodic structure of the original, starting with an accident or mishap of some kind, leading into the famous opening credits and a three-act structure. The rescue is planned and launched in act one; the team faces obstacles in executing the rescue in act two; and act three is the successful rescue and denouement.

“That’s what gives the editorial nature of the show its brand,” says Ridge. “You know what kind of experience you’re going to have. That doesn’t mean you’re going to end up with 26 generic kind of shows; all the stories are different and it is a little bit like trying to make 26 mini feature films.”

Where the original series’ episodes were an hour long, Thunderbirds Are Go!  has a half-hour format that requires faster pacing and simple, clear storytelling.

“We have to start off with a bang and get right into the action,” says Hoegee. “And we’ve found that, even in 22 minutes, we can tell pretty good stories and not really feel like we’re lacking anything.”

The most obvious change is the absence of the boys’ father, Jeff Tracy, who in the original was a dominating presence as the leader of the Thunderbirds. “We didn’t want to make the Jeff Tracy show; it had to be about the boys,” says Hoegee. The character is said to be missing in action after an undefined accident, giving the boys a loss to feel as well as forcing them to step up and make decisions on their own.

Another major change is the addition of Kayo as IR’s head of security. The character is adapted from Tin-Tin, who was the maintenance tech and lab assistant in the original, bringing a female character directly into the forefront of the action.  “She has a bit of a dark secret in that her uncle is The Hood, something not known by the boys at first,” he says.

A bigger role was carved out for Grandma Tracy, who is barely seen in the original, as the emotional head of the Tracy family. And Lady Penelope gets a modern update while her trusty butler, Parker, stays constant with original series actor David Graham returning to do his voice.

There are other elements of the original that were just too iconic to tamper with, one of which being the opening countdown sequence that introduces the five Thunderbird craft, their pilots and the rest of the cast.

Ridge says the production got permission from the estate of actor Peter Dyneley, who voiced the countdown and played Jeff Tracy on the 1960s show, to re-use the original recording. The theme music, composed by Ben and Nick Foster, also pays tribute to Barry Gray’s brassy original.

Mixing Up the Look

Finding a visual style for the series was another major challenge. Clearly, animation was going to work better than puppets, but Ridge says they still wanted to find a unique look for the show that stands out from the pack and echoes the original.

“We were very keen to move away from the customary CGI digital shiny look that you have on a lot action shows today,” he says. “There’s nothing wrong with that — it works for many shows very successfully — but we wanted to create a visual esthetic on Thunderbirds that just set itself apart from the original, and that’s why we ended up experimenting with this CG and live-action mix.”

Working with Taylor’s New Zealand-based Pukeko Pictures, a pipeline was set up that combines live-action miniatures and CG animated characters.

“Most of our world in Thunderbirds — all of our vistas, all of our buildings, our exteriors — are real models,” says Ridge. “They are live-action miniature models — and though I say miniature, actually they’re quite huge in the Weta Workshop — and built at different scales. They built two different scales of Tracy Island and filled a huge tank with water, so all the water around Tracy Island is completely real.”

The vehicles are created using CG “skeletons,” around which are wrapped digital skins made from photographs and scans of large glass panels painted in each craft’s iconic colors and physically worn and weathered with dust and dirt.

“No CG aspect is completely electronic,” says Ridge. “It’s all got some physical nature to it and that is why the joy in it is possible to see.”

Some of the CG vehicle work is done in New Zealand, but all of the character animation is done by CGCG in China and Taiwan. “We chose them just because of their track record for action adventure shows for the major U.S. networks,” says Ridge.

The show got a major push when it launched on ITV, with a life-size replica of Thunderbird 4 floated down the Thames. Reactions have been mostly positive, as have ratings — a second season of 26 episodes already has been ordered.

The show is still rolling out internationally, with ITV taking its time to find the right partner in each territory. Ridge says the patience of fans in markets like the United States, where the show has yet to announce a broadcast deal, will be rewarded.