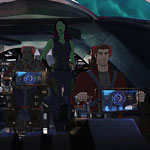 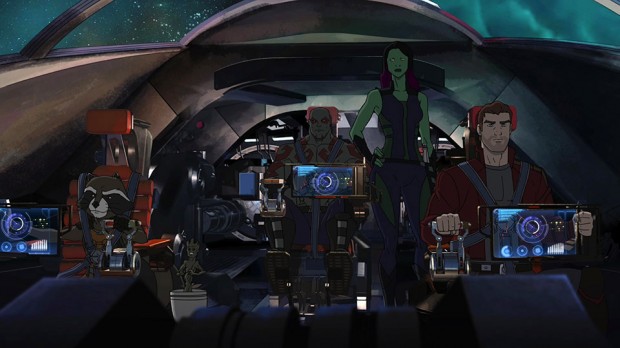 GUARDIANS OF THE GALAXY

Long before it paid off as a big-screen box office hit, Marvel trusted its material to turn Guardians of the Galaxy into an animated series debuting Sept. 26 on Disney XD.

When Marvel set in motion Guardians of the Galaxy as a major entertainment franchise, it seemed to like a long shot given its obscurity even to comic book readers. But even before any footage was shot for the hit 2014 feature film, the studio had enough confidence in the franchise to green light a follow up animated series.

“Marvel had a strong feeling about the film and knew there was something special with these characters and a lot more stories to tell,” says Cort Lane, co-executive producer on the series. Lane says he read and loved the movie script — even listening to the now-famous classic rock tracks as he followed along — and immediately saw the potential for animation.

“We started talking about what a series would look like, what type of stories did we want to tell about these characters and what more could we learn about them,” he says.

The results debut Sept. 26 on Disney XD, as Guardians of the Galaxy brings to animated life the adventures of Peter Quill (a.k.a.) Star-Lord, Rocket Raccoon, Gamora, Drax and Groot. The series features the voice talents of Will Friedle as Quill, Trevor Devall as Rocket, Vanessa Marshall as Gamora, David Sobolov as Drax, Kevin Michael Richardson as Groot and James Arnold Taylor as Yondu and the telepathic dog Cosmo.

Fitting the Guardians into the ever-expanding Marvel Universe and its continuity is a question Lane says is less important than telling good stories.

“From a continuity point, we don’t want to get lost in the weeds, which is very easy to do with Marvel properties,” he says. “We’re not going to contradict these versions of the Guardians characters. We’ll try to be pretty consistent, but we’re less concerned about complex continuity and crossovers as we are in just getting the characters right so that a viewer from one show to the next goes, ‘Oh, yeah, that’s the Rocket that I love.’”

The show has some serialized elements but is not intended to be a fully serialized experience, with one mid-season arc in particular bringing in a number of established Marvel characters. Among the characters fans can expect to see are Thanos, who is the season’s main villain; and Cosmo, a Russian cosmonaut dog with telepathic and telekinetic powers who had a brief cameo in the movie and a has large role in the comics.

“We also get to meet a lot of new villains — some we’ve never featured in any animated series, some are reimagined for this series, and then there are some new characters that were created for the series,” says Lane. “It’s the best of all worlds.”

Work began on the show a year before the movie was released and it was in development concurrent with that of the movie. On the animation side, Riley says he referred to the handful of appearances the characters had made on other recent Marvel animated series as well as the comic books. But otherwise, “At the time I was kind of winging it,” he says.

“I looked at the property and said if I had a chance to work on it, this is kind of the visual approach I was interested in. And around that time I got an invitation to go see an early cut on the movie and from that we could definitely get a sense of how the characters were going to play out.”

Riley says early animation tests focused on action and a visual style, with requests for revisions coming back from Marvel based on how the movie was developing and other plans for the characters in areas like comics publishing.

Riley also says they were able to incorporate early on elements of the feature’s costuming for the character, but the series has its own look that stands out from Marvel’s other series. “A lot of it just has to do with myself and making my pitch and Eric (Radomski) being able to tweak some knobs as far as background style and such,” says Riley. “A lot of that also has to do with the fact that every iteration is going to be a little bit different depending on the team that gets put together for a project. I was able to grab some talent that I was really happy to get ahold of.”

While Riley says he was able to get a little bit of his own flavor into the designs and animation, the overall look of the show is clearly Marvel. “The studio wanted to stay very kind of cohesive in visual style and approach and of course a lot of the production teams that we’re using are already familiar with the style that’s been established,” he says.

Lane says several elements set apart Guardians from Marvel’s other shows. “The palette is very rich in terms of the colors, the backgrounds and the environments,” he says. “There’s a lot of really weird character designs, alien creatures and stuff that (Leo) has led the team to come up with — really bizarre looking stuff that’s frankly pretty funny too. And the last element is it’s really mixed between more expressive character animation than we’ve done in the past with lots of CG and lots of visual effects to get that epic sci-fi feel.”

With preproduction done at Marvel in the United States, animation work is done in Korea by a number of companies including Studio Mir, DR Movie, Sunmin Animation Studios and Lotto Animation, says Riley.

Among the animators, Groot has proven a particularly popular character to work with. “You can see the love that’s definitely put into a lot of his character animation, especially when he’s doing the more exaggerated actions,” Riley says.

Tone wise, Lane says the show balances health doses of action, character and humor. “Humor is such a big part of this franchise, even more so than any other of the big Marvel franchises,” he says.

The season is organized as a kind of cosmic scavenger hunt, Lane says, pitting the Guardians against a range of villains in pursuit of an object that is related to Quill’s origin.

“It’s weird crazy stuff, with lots of bizarre planets along the way and meeting characters who have a grudge against the Guardians because they all have pasts. And that creates complications in their effort to get to this thing.”

You may also like...
Related Topics:Disney XD, Guardians of the Galaxy, Marvel