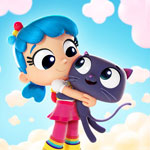 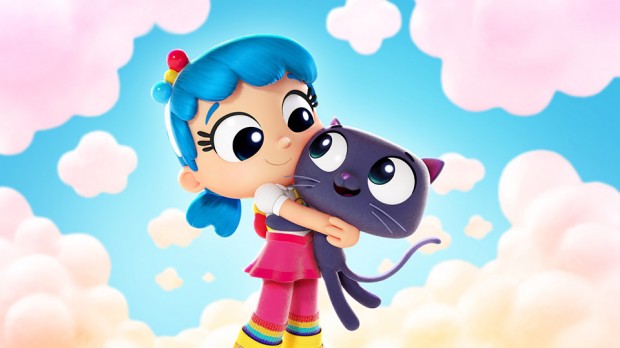 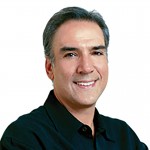 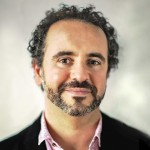 The new Netflix preschool series True and the Rainbow Kingdom centers on a smart, problem-solving heroine in an eye-popping digital universe.

If you know a preschooler who has been bingeing on Netflix and obsessed with a charming eight-year-old girl named True, her feline pal Bartleby and a magical Wishing Tree, you are not alone. Lots of young viewers have fallen under the spell of True and the Rainbow Kingdom, a colorful new CG-animated series exec produced by Guru Studios, in collaboration with Pharrell Williams (Yes, that Pharrell Williams!), the artist collective known as FriendsWithYou and Home Plate Entertainment.

The 20 x 22-minute series, which debuted on Netflix in August, follows the adventures of its smart heroine as she sets out to solve problems in the magical Rainbow Kingdom, teaching kids about empathy and compassion without being preachy and pedantic. The journey of True to the small screen began more than seven years ago when creators Samuel Borkson and Arturo Sandoval (FriendsWithYou) met with exec producer Bill Schultz.

“When I met with Sam and Arturo in 2010, I was blown away by their creativity and artful integrity,” recalls Schultz, the Emmy-winning producer, whose many credits include The Simpsons, King of the Hill, Ed, Edd n’ Eddy and Wild Grinders. “We fell in love with the idea of True as a heroine, and saw her as this non-gender-biased character. The research also showed us that the audience is gender-neutral if you tell a good story to young viewers.”

After Schultz met with Mary Bredin and Frank Falcone of Canada’s bustling Guru Studio (Justin Time, PAW Patrol) at an industry event, the three joined forces to put True on the fast track. “I had known and admired Frank and Mary for many years, and we were always on the lookout for a project to collaborate on. Frank was familiar with the artists and Mary had actually visited one of FriendsWithYou’s art installations in Toronto’s Queen’s Park, so I didn’t have to sell it to them. It was really a marriage made in animation heaven.”

“When Bill showed us the material, I said this is Pokémon with a bit of a girl focus and no fighting,” notes Falcone. “I loved the idea of all the power-ups that can help you solve a problem. The characters reflect the goodwill and empathy that is behind the creators’ mission. What it really needed was having a lead character that can drive a story and developing the rest of the characters to a place where we knew who they were.”

Bredin brings up the fact that centering the show on a strong, smart young girl is what really makes this show a special project. “Many preschool shows have a girl lead, but then, they are all about magic or being a princess,” she explains. “True is a girl who uses her critical thinking and really has to solve a problem using the Wish power that she has been given on each adventure. She’s kind of a Junior Wonder Woman! Also, creating a show that focuses on kindness and mindfulness, but not in a preachy, pedantic way, has been incredibly fun: These are values that are much needed in the world today!”

Both Schultz’s company Home Plate Entertainment and Guru were very hands-on from the early stages of development to sales, financing and distribution because it was such a unique opportunity for everyone involved. In addition, things really started jumping when musician Pharrell Williams, who is also a big fan of the artists, decided to come on board as exec producer. “I know people says this about every project, but for us, this was the right set of people at the right time with the right vision.”

When Netflix expressed interest and greenlit the show for 20 episodes, the team entered a fast and furious R&D process. Netflix also allowed the creators to opt for a 22-minute-long format rather than the usual 11-minute length used for preschool shows.  As Bredin explains, “What we often see in preschool shows is that everything gets crammed in 11-minute segments, and this was a wonderful opportunity for us to create 22-minute stories and use a different storytelling approach than preschoolers are accustomed to.”

Schultz agrees. “The trend these days is to cater to shorter attention spans, but thanks to Netflix’s unique position, we were allowed to develop the characters, have comedy and gag-driven and non-dialog-driven moments and focus on the narrative in three acts. This is more of a lean-forward experience rather than the old days, where kid would watch TV while eating their cereals.”

The design aesthetic of True and the Rainbow Kingdom is another huge draw. “The show is clearly aligned with the design aesthetic of FriendWithYou,” notes Falcone. “Kids are so used to seeing rich visuals as the lines are clearly blurring between what we see on the big screen and their personal devices. Their expectations are raised. What we really focused on is interesting materials and quality of environments to allow simple shapes and designs to live in this digital world, without being dishonest to the medium. Our goals were to imagine a world that was a cross between a Rankin/Bass stop-motion special and Super Mario.”

To create this digital world, Guru relied on Redshift Rendering, a powerful GPU-accelerated renderer, which is built to address the demands of today’s high-end production rendering. “We got a lot of speed and efficiency out of Redshift, allowing us to provide quick feedback to the artists so they could really hone the look of it, and really do something that you can’t really do in traditional rendering pipelines. We really wanted to ensure that the characters and stories are real and look beautiful at the end of the day. Kids can tell the difference between a show that is just slapped together and one that is given lots of love and attention.”

Now that that the first season of the series is finding its audience on Netflix, the creators are proud of the highly original, unique universe they have created together. “We’re proud to be behind this creative-driven show which doesn’t have a cookie-cutter look. When we tested the show, it was thrilling to see that the kids were all solidly engaged,” says Schultz. “We also got a huge engagement from boys, as boys watching shows today don’t look at having a female lead as an issue. They just like to watch a show that is fun.”

After working on so many different animated properties, Schultz says he always begins a project hoping it will be unique and trailblazing. “At times, we’ve had to fight the urge to take shortcuts, but we didn’t, and worked on this show for seven years,” says the toon veteran. “We kept our heads down, and everyone shared the same vision to create something worthwhile for the audience, and I think we have achieved it. We were quite ambitious and hopefully, you can see it all on the screen.”

Bredin says she is also proud of True’s wonderful animated adventures. “I strongly believe that children deserve amazing, top-quality shows, not just leftovers. As grown-ups, we are now demanding that quality,  and children should have the same options, and I believe we have delivered!”

“We have created an amazing playground of characters for preschoolers,” concludes Falcone. “This universe is going to be an incredible place for us to tell playful stories and discover ways to engage with that universe, which will be a lot of fun for the audience to explore, hopefully beyond the 20 episodes as well.”

The first 10 episodes of True and the Rainbow Kingdom are available for streaming on Netflix, with ten more set to debut in January.