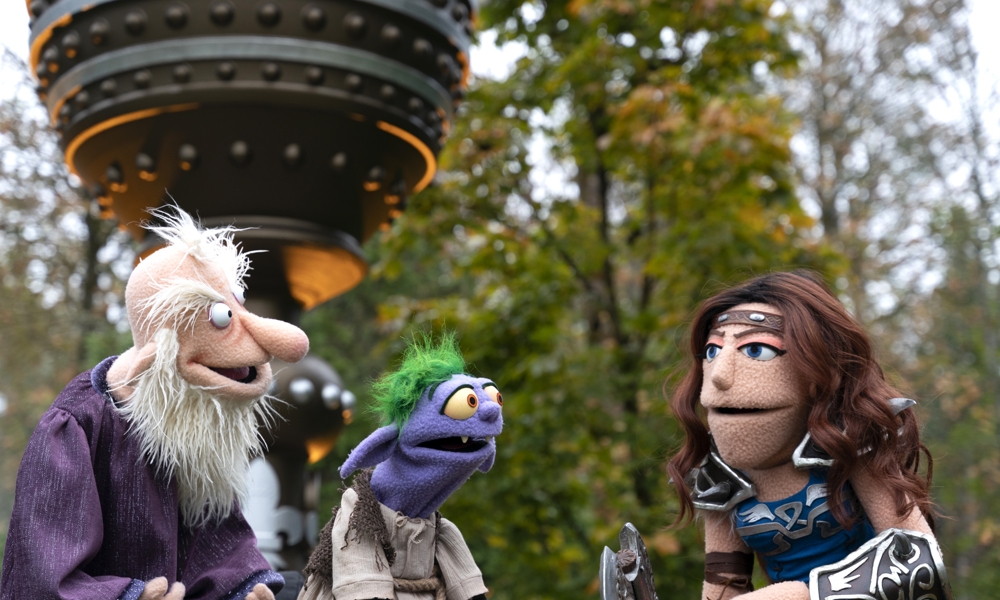 Nickelodeon’s fantastic new series The Barbarian and the Troll has captured the hearts of fantasy lovers, puppet fanatics and connoisseurs of fine warrior princess culture since it debuted in early April. Created by Mike Mitchell (Trolls, Shrek Forever After, The LEGO Movie 2) and Drew Massey (Puss in Boots, Kung Fu Panda) the series centers on Brendar, a fierce barbarian on a quest to avenge an attack on her family, voiced by Spencer Grammer (Rick and Morty). When she joins forces with a spirited bridge troll named Evan, they set out to save their kingdom together, and many entertaining adventures ensue. We had the chance to catch up with Drew Massey, who was kind enough to tell us a few things about the show we were dying to find out!

Animation Magazine: Congrats on the awesome new show, Drew. Can you tell us a little bit about the genesis of the show and how it all came together?

Drew Massey: Thank you. I’m happy you think it’s amazing! I met Mike in the early ‘90s on a puppet project he sold to ABC with a fellow CalArts alum called Chunks of Life. We have been crossing paths ever since on various puppet projects. In 2018, we reconnected and went to lunch with the goal of finally doing a puppet-centric show together. He suggested the fantasy genre, knowing we were both big fans, and said it should have a kick-ass woman barbarian.

I said, “HECK YEAH!” and said there should also be a troll who was terrible at toll taking and wanted to go see the world. He was like, “NO DOUBT!!!” So, from that very first meeting we had our barbarian and our troll. We kept loudly spitballing ideas and by the end of lunch had the genesis of what would become the show. Apologies to our fellow diners. We were very spirited. 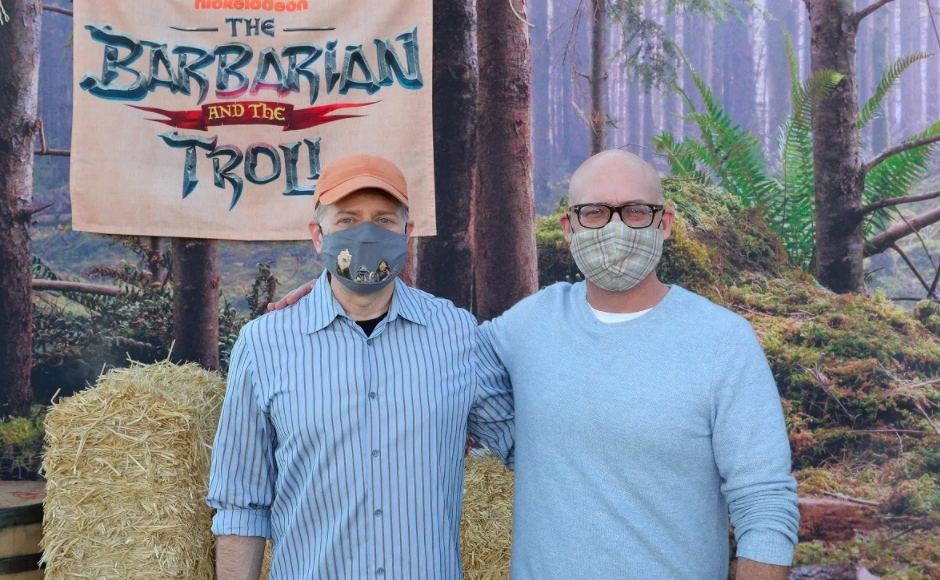 What do you love best about voicing one of the main characters AND being creator/writer on the series?

Why… all the POWER, of course!  [Laughs villainously]

I generally haven’t had the authority on a puppet project to just change things that I thought needed changing. I usually think: “Maybe that could be better…” and that’s where it ends. Here I could really add a lot because I had helped create this world. It’s a double-edged sword though, because I also felt a responsibility to keep adding to, building, and refining what we had created.

Mike and I never stopped working. I was designing, writing and building throughout production. On the weekends I was constructing an evil tree or sculpting things in ZBrush and 3-D printing them. It was really fun, and I felt like being able to contribute so much to this show was a privilege. Doing all that and performing Evan was a lot to tackle at once, but I’d do it all again in a heartbeat.

Did you always envision the show as a puppet-animated series?

Absolutely! This was designed to be a puppet show and nothing else. Mike and I had been thinking about something like this separately for years. We both love puppets as a storytelling medium and we both wanted to see an all-puppet universe on screen that was epic, funny and charmingly puppetry.  We wanted to push some boundaries and expand the demographics for puppets. We convinced ourselves that we could make an all-puppet show for kids that wouldn’t leave any of the adults behind. Then we set out to convince others of the same thing. 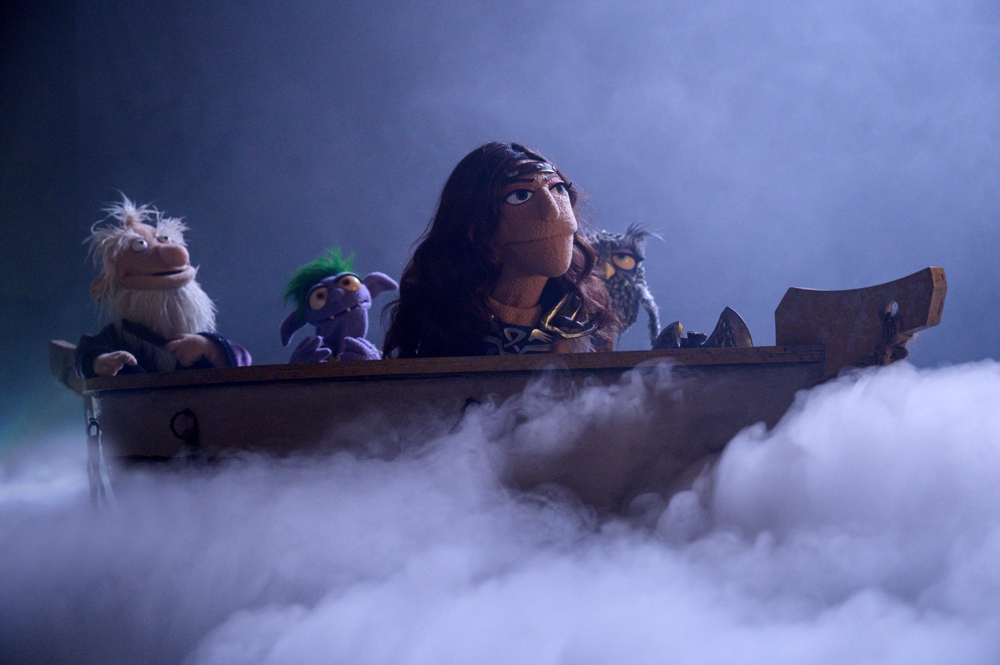 What is the biggest challenge of being the showrunner and a creative force in the series?

I have the toughest time figuring out politics. My responsibilities as a showrunner/creator are numerous and new to me. It’s tricky to figure out how much to ask for, when to ask for it, whom to ask and where my boundary is between being “helpful and creative” versus “too pushy.” Luckily, Mike is used to dealing with those issues as a director, and he’s something of a political savant. He helped me figure it all out and I have learned a great deal from watching him work. He’s spent so much time with Jeffrey Katzenberg that he could teach a Master Class in corporate politics.

That said, the execs at Nickelodeon have been very supportive of us and the project. They really get what we’re doing and trusted us to make it work, so that made the whole experience really pleasant despite my political shortcomings.

What do you love best about this project?

I love being able to work with my friends, who are all really talented. Also, I love that the product of our efforts turned out a lot like I wanted it to. This show would have been my absolute favorite when I was a kid … or a teen … or a young adult.

Is Evan your favorite character on the show?

Ummmm … yes? That’s a difficult question for me because I really like all of these characters for different reasons. I like Evan because I never overthink him. I just approach things from the perspective of: “What’s the most positive way to spin this right now?” and, in a nutshell, that’s Evan. Design-wise, though, I think Steve the Knight came out perfect. Those proportions are bonkers. He belongs on the cover of a Spinal Tap or Tenacious D album. 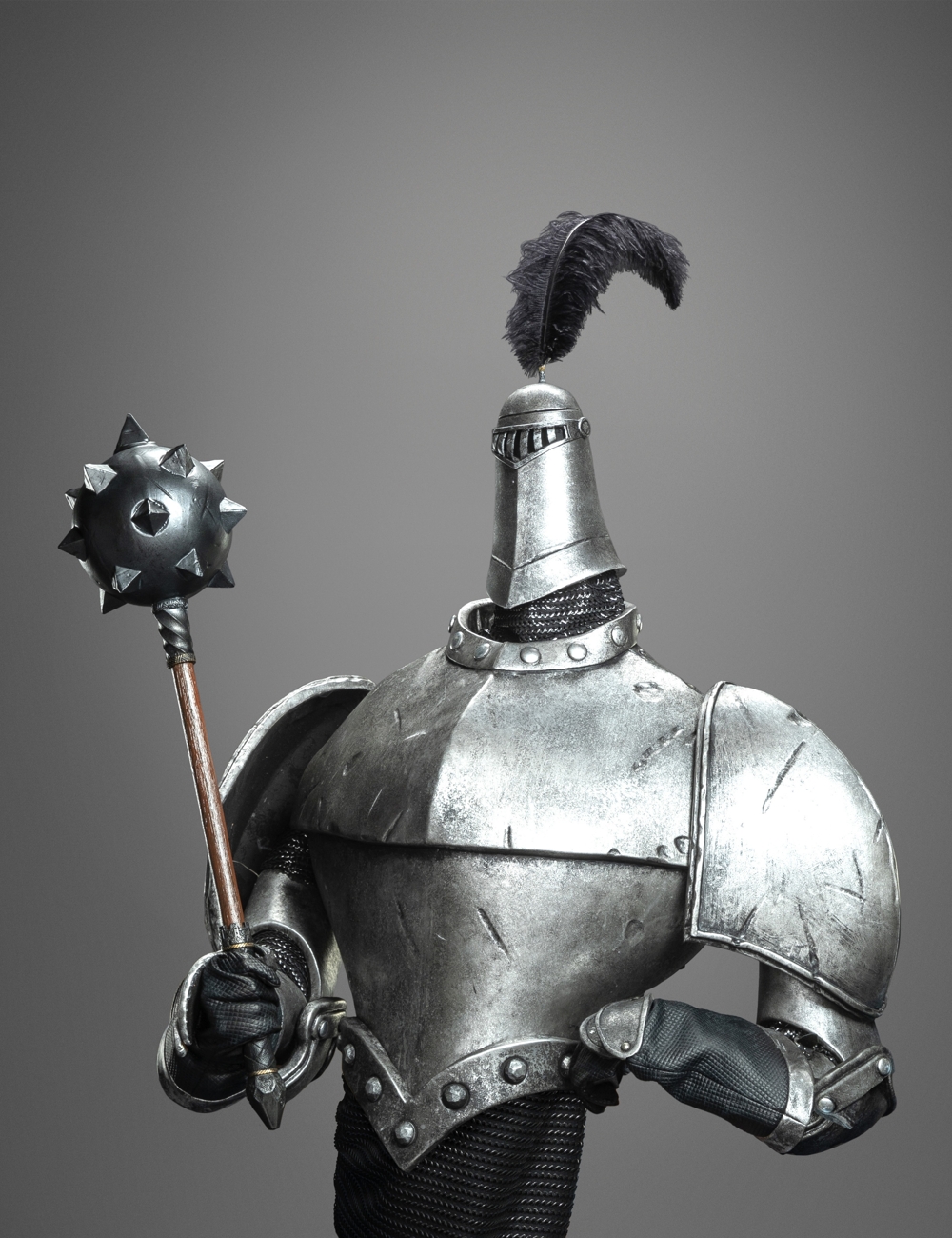 What has been the most memorable or craziest response you have had to the series?

I’m really enjoying the fan art right now. To think that something I helped create is inspiring others to draw … Well, it fulfills my goal of being a creative catalyst.

After The Curious Creations of Christine McConnell someone got a tattoo of Colleen [Smith]’s character “Rose.” So I’m just waiting for The Barbarian and the Troll body art. That will be memorable. 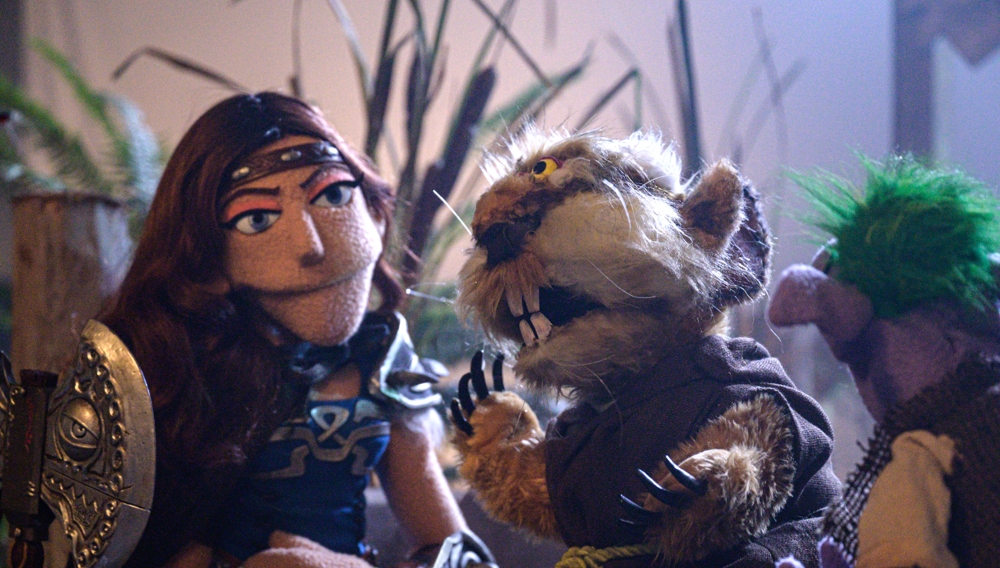 How do you and Mike Mitchell work together on the series?

This has been a great working experience for me because Mike, in addition to writing, also draws and designs characters. Our workflow is this: we generate material for the show, trade it, adulterate it, and hand it back. We go through that same process over and over until we are thrilled with the result or we run out of time.

How many people work on the series and where is it produced?

The pilot was produced in Los Angeles with Jen Gore, and Charles Papert was our DP. Gary Kordan production designed, creating our amazing Queen’s Goiter set inside and out. After we got a greenlight for the series it went to Vancouver. David Magee produced, Tyler Walzak was our DP and Matthew Budgeon was our production designer. Our puppet crew was an essential part of this production; they literally built our entire cast!

The puppets were mostly from the Los Angeles shop. On the pilot, Scott Johnson was our lead, then for the series Jürgen Ferguson took over as our main builder. He and Russ Walko did the main characters, with Christine Papalexis, Rachel Burson and Gabby Padilla making a ton of skins, backgrounds and costume bits. Carol Binion was our costume designer.

In Vancouver, we had Dusty Hagerud wrangling and sometimes building, and Justin DeLima wrangling. Gordon Smuder built some puppets in Minnesota. They all did phenomenal work, and a LOT of it.  There are hundreds more people who worked on this, in VFX, post, sound, etc., but I wanted to give credit in print to our puppet crew, especially. 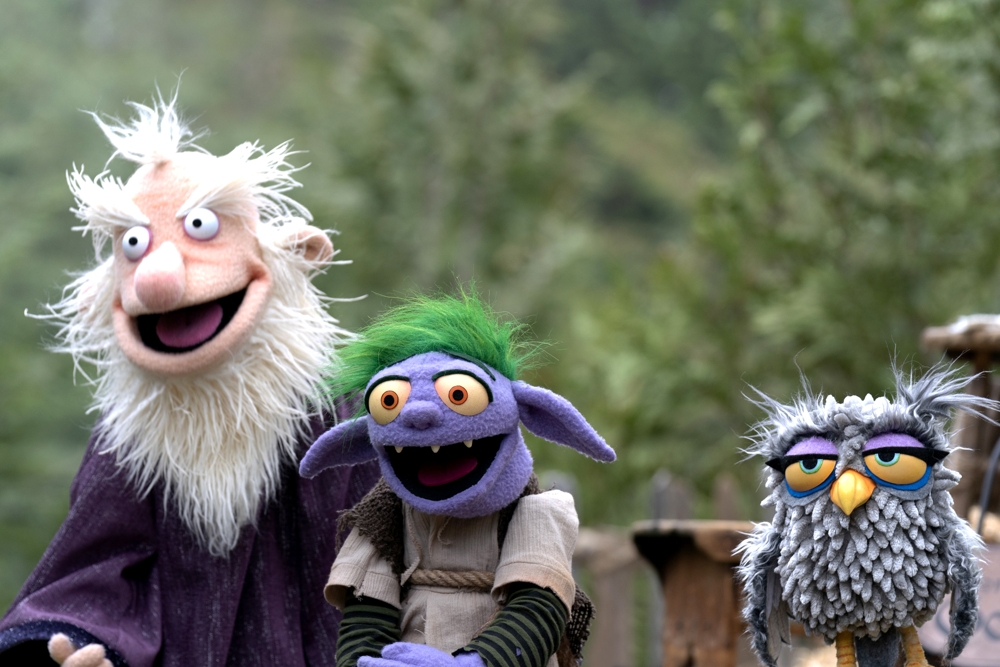 Did you have to deal with a lot of complications due to COVID?

We were tested three times a week, we had to have wrist bands to enter the shooting area, and there were no visitors allowed. It was odd, but not unmanageable. We didn’t have any work stoppages due to COVID, thank goodness.

In general, I felt like the COVID team had it under control and it was good to see that the city of Vancouver, as a whole, took mask-wearing and distancing seriously. Their case numbers were quite low compared to most places in the U.S., so it felt safe. The fun part was that I, Mike and the puppeteers were in a “pod” so we could have get-togethers on the weekends. It brought a much needed sense of normalcy and camaraderie to our time there.

You have worked on a lot of animated and puppet-animated series in your career… Do you have a favorite medium?

I’m partial to stop-motion. It’s the medium I started doing as a kid with my Super 8 camera and blobs of plasticine. Will Vinton in his heyday did exquisite work. I think what Laika puts out is infinitely pleasing to watch, and I love Creature Comforts. That said, I really like live-action puppetry when it’s done right. Good thing, since it’s pretty much dominated my career. Audrey II in the 1985 Little Shop of Horrors is perfect in every way. Have you seen Earth to Ned? Also a great example of a team of individuals creating seamless, unified performances. It’s really fun to watch. 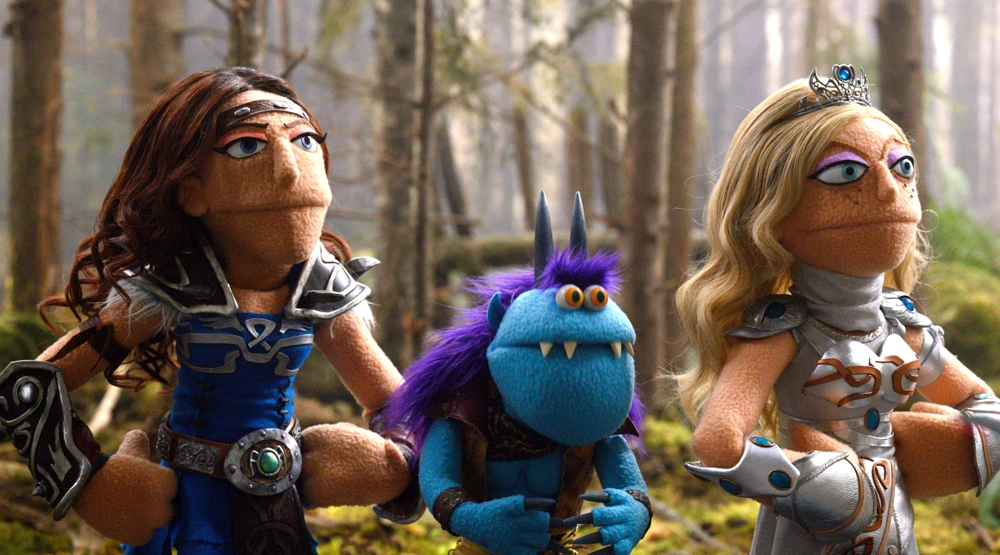 When was the first time you knew you wanted to work in the animation/puppetry field?

I’ve always loved sci-fi and fantasy movies. I knew I wanted to have a career in entertainment making fantastic things from the time I was maybe four or five, when I watched four hours straight of Flash Gordon serials. I thought maybe I’d be a storyboard artist or in special effects. My opportunity to be a puppeteer came out of left field when I was in college. I was lucky enough to have a friend who worked for the Muppets named Michael Earl, who introduced me to Kevin Clash and basically jump-started my career.

Favorite character (animated or puppet) … EVER?

I’m gonna cheat and give a multi-answer. Animation-wise, I love the old, really nuts Daffy Duck, when he used to leap around like a complete screwball. For voice, I’ll go with Miss Malone from The Completely Mental Misadventures of Ed Grimley. Catherine O’Hara does the most amazing vocal work as that character. Every inflection is a surprise. As for puppets, pretty much any character Frank Oz did.  Early Grover was always a favorite, especially as a waiter opposite Jerry Nelson’s Big Blue. Comedy Gold.

Thank you so much!

Thank YOU! This was a blast. I’ve been reading your magazine since I was a kid, so it’s an honor.

The Barbarian and the Troll airs new episodes Friday nights on Nickelodeon. You can also watch online at Nick.com. The first episode is available to sample on the network’s YouTube channel.