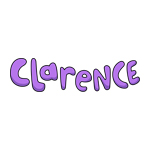 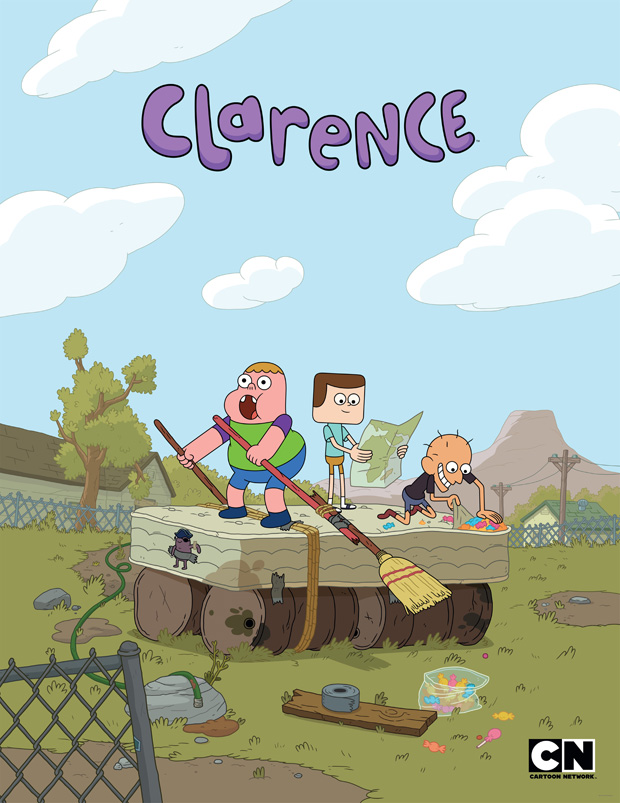 With the glut of fantasy-driven kids’ content riding the airwaves the last few years, a cartoon centered on the ordinary adventures of a simple neighborhood kid would seem a breath of fresh suburban air. Meet Clarence, the lovable eternal optimist whose eponymous show is the latest 2D animated comedy to join Cartoon Network this month.

The series celebrates the joys of childhood without magical embellishment or talking animals. Whether Clarence and his buddies (overly-cautious Jeff and unpredictable Sumo) are tackling epic dirt fights, awkward crushes, trampoline combat or prank-filled sleepovers, the gap-toothed hero finds wonder in the everyday.

“I think our show is pretty clearly striving to be realistic … keyword ‘striving,'” says first-time show creator Skyler Page, who also voices the main character. “It seemed like the market was pretty flooded with fantasy and random humor, and I remember a lot of shows when I was growing up that were more poignant, with more relatable situations … real characters who can’t use magic to get out of their problems. I felt like there was a need for that, and that was our focus driving the show.”

The young artist was aided in developing Clarence by the show’s creative director, Nelson Boles, whom he met while studying animation at CalArts (the two bonded over a shared love of Ren & Stimpy their first year). They begin developing the concept a while ago, but when Page landed a job at Cartoon Network and found out the studio was looking for ideas for its shorts program, it was full steam ahead. This turned into a pilot which earned the duo a greenlight — and a little more time to sharpen things up!

From a two or three person crew polishing the pilot, Page — who previously served in storyboarding and writing departments for Adventure Time and Secret Mountain Force Awesome — now finds himself in command of a local team of 30-35 writers, storyboarders, designers, colorists and revisionists at Cartoon Network Studios. Animation service work for the show is done by Saerom in Korea. While Page and Boles are a bit harried by the production schedule to give accurate estimates, they guess the show order is about 60 percent finished.

Page points out that though Clarence is “the little taste of reality in a sea of fantasy,” there’s still room in his show for imagination. “Everyone gets tired of reality, we get enough of it in real life,” he jokes. “So, there’s some fantasy in our show, too. One thing I like is we can do both and show the incongruity of the two — show a character’s ideal version of a situation and then what’s actually happening.”

This blending of the realistic and the fantastical is reflected in the show’s design, which favors ordinary (or even downright unappealing) locations made inviting with cartoony flair. And the character designs also teeter back and forth between the scales of probability.

“With all the characters, it’s almost like the inconsistency is the consistency,” says Boles. “Some look like Muppets, some look like they’re from Steven Universe, but the art direction ties it all together. The way we justify it to ourselves is, the world is full of different looking people.” Boles adds that they showrunners wanted to avoid the Simpsons effect where every character has to look just right to fit in to the existing animated world.

Page adds that another show philosophy is to treat background characters with care, making sure whatever they are doing on-screen is memorable. The old schoolmates add that they are always looking for ways to take these smaller roles and use them to expand Clarence‘s story possibilities. “Another thing we’re trying to push with the show is there’s not just three main characters and everyone else is just there for a joke,” adds Boles. “Everyone has a chance to hang out with everyone … the world gets bigger and bigger.”

Fans of old school cartoons will appreciate Clarence‘s emphasis on character-based and physical humor. Clarence, after all, is not all that aware of how clumsy he is and frankly doesn’t care how ridiculous he looks (a trait we should all be jealous of). Whether he’s sneakily tiptoeing about while managing to knock over everything around him or flagrantly violating Jeff’s personal space, it’s all part of the plan as far as Clarence is concerned.

When asked about the toughest part of producing his first show, Page says while he loves every minute, the pace is hard to get used to: “Once you do an episode, and it’s really good and you’re proud of it, you have to start over. Every time. It’s exciting, but it’s very challenging.”

Page and Boles list John Kricfalusi’s Ren & Stimpy as well as King of the Hill and SpongeBob SquarePants (a few veterans of which are on the Clarence staff) and the feature work of Phil Lord and Chris Miller as their top animation inspirations. But when asked for advice for other upstart cartoonists, they say being true to yourself is the key.

Turn It Up to Eleven
Return to Rio