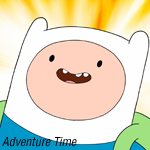 The series has become a real hit for the network since its debut in April 2010, earning a Primetime Emmy nomination and scoring ratings that ranked it first in its time period for kids 2-11 and 6-11.

Created by Pendleton Ward, the series is about Finn and Jake, a pair of unlikely heroes who traverse the mystical Land of Ooo and encounter its colorful inhabitants. Finn, a silly kid with an awesome hat, and Jake, a brassy dog with a big kind heart, depend on each other through thick and thin. The Land of Ooo is teeming with imposing mountains, lush green plains, accessible forests, ubiquitous prairies and winding rivers, the cities and towns are filled with bizarre characters in need of unique assistance. Whether it’s saving Princess Bubblegum, defeating zombie candy, mocking the “oxy-moronic” Ice King, or rocking out with undead music wiz Marceline the Vampire Queen, with Finn and Jake it’s always Adventure Time.

Adventure Time is produced in partnership with Frederator Studios with Fred Seibert serving as an executive producer on the series.