Cartoon Network will be expanding its original animation program line-up in 2016 by producing four new projects in Australia. Set to join the toons produced at the company’s brick-and-mortar studio in Burbank, Calif., the Aussie productions will utilize a virtual studio model to utilize talent from across the country.

Exchange Student Zero, the company’s first series made on the continent, wraps production this week in Victoria where the full team will be physically together for the first time. Created by Melbourne-based Patrick Crawley, Bruce Kane and Maurice Argiro, the 13-part comedy-adventure fuses anime and western animation and ideas. It features multiple voices performed by Rove McManus, and the music of DEVO’s Mark and Bob Mothersbaugh.

Sydney-produced Bill & Tony from Flying Gherkin and The Sketchy Show  from Brisbane’s Ludo Studio are short-format comedies commissioned by Cartoon Network. Bill & Tony is a non-dialog claymation series about two “brothers from another mother” with hearts of gold and barely a brain cell to rub together. The Sketchy Show takes real kids’ drawings and turns them into hilarious animated shorts.

Another Australian creation, Lasso & Comet, has been accepted by Cartoon Network Studios’ international shorts program and will go into production soon. From Melbourne’s Rubber House Studios, the action-adventure-comedy centers on a 13-year-old boy with a magic rope and his best friend, a talking comet from outer space, who live in a world filled with giant monsters.

CN Australia has also greenlit a pilot for Monster Beach: The Series, based on the television movie which nabbed an ASTRA award this year. Another Melbourne project, from Bogan Entertainment Solutions, Monster Beach follows Jan and her brother Dean as they are packed off to stay in a seaside paradise — that just happens to be inhabited by scary, surfing monsters. 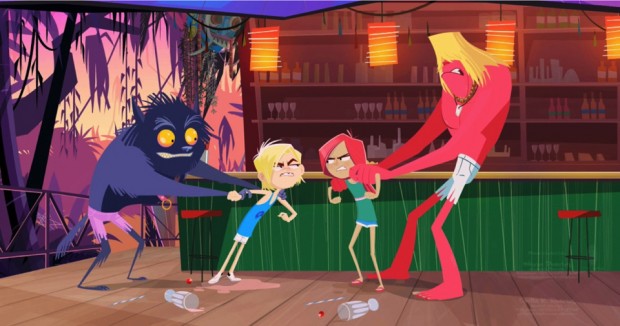