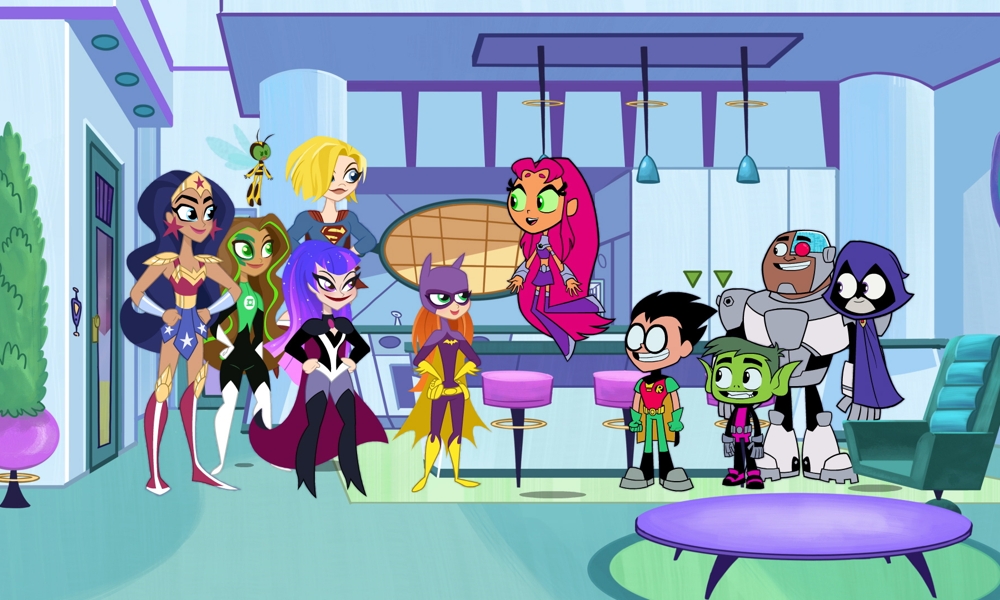 Cartoon Network viewers can embark on an interstellar adventure this month as Teen Titans Go! and DC Super Hero Girls team up in their first-ever crossover special. Plus, the season finale of Victor and Valentino and a spring bloom of new episodes from more animated favorites.

Gear up for Memorial Day weekend with an out-of-this-world adventure starring not just one of your favorite superhero teams, but TWO! Watch as the Teen Titans and DC Super Hero Girls head deep into the galaxy and team up in Space House, a one-hour Teen Titans Go! X DC Super Hero Girls crossover special premiering Monday, May 31 at 6 p.m. ET/PT.

The four-part episode follows the teen superheroes as they accept a mysterious invitation to enjoy a vacation getaway among the stars. The Space House is equipped with enough state-of-the-art technology that even Batgirl takes notice, complete with a massive TV fit for binging every episode of Muffin Wars – a superhero favorite – plus a 3-D printer snack machine that can supply Cyborg and Beast Boy with enough burgers, burritos and burgerritos to last an infinity. But where is the Space House headed and who invited them on this vacation in the first place? Robin, Wonder Woman, Raven, Supergirl and the rest of the crime-fighting heroes from the two toons join forces to solve this ultimate intergalactic mystery.

Back on Earth, Teen Titans Go! will have several exciting new episodes premiering in May including an episode featuring iconic New Teen Titans creators Marv Wolfman and George Perez as guest stars. And after the Space House crossover, DC Super Hero Girls returns with an all-new season of world-saving adventures beginning Sunday, June 6 at 8 a.m. ET/PT.

Need more excitement to jump start summer? Don’t miss Vic and Val as they venture on an epic journey through the nine levels of Mictlan in the season two finale of Victor and Valentino, premiering Saturday, May 29 at 10:30 a.m. ET/PT. Plus, stay tuned all month long for all-new curiosity-filled episodes of Total Dramarama, and more.

As previously announced, this month will also see the premiere of Adventure Time: Distant Lands – Together Again on CN’s sibling streamer HBO Max; Thursday, May 20. Fans on Apple & Onion can also stream new episodes starting May 19 which will see the edible besties dancing, Christmas shopping and coming to Falafel’s aid during several times of need. The duo also play trivia games, outsmart Burger’s roommate, save their favorite booth at Pizza’s Diner and so much more! 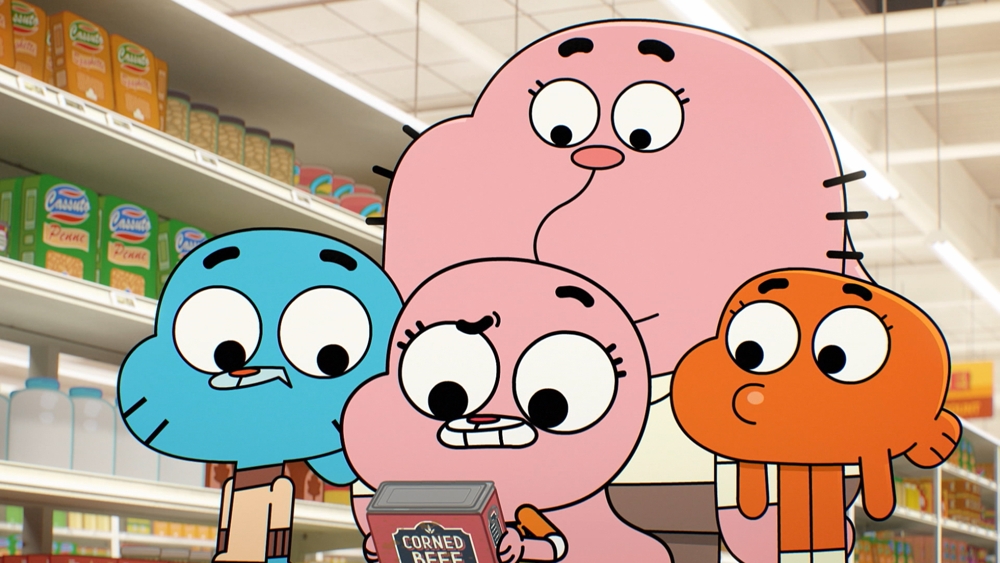 Saturday, May 1
9 a.m. ET/PT Teen Titans Go! “Zimdings” – When Robin selects the last font on the list for his presentation, it sets off the typocalypse.

9:30 a.m. ET/PT Total Dramarama “Weekend at Buddy’s” – After Cody’s best friend doll breaks on their watch, Owen and Beth put themselves in grave danger while trying to do the right thing.

10:30 a.m. ET/PT Victor and Valentino “Cenote Seekers” – When Victor and Valentino miss their chance to beat the heat and enjoy a fun day of swimming with friends at a cool cenote, they soon find themselves lost in the desert, thirsty, exhausted, and confused. Will they find the cenote or will their constant bickering be their undoing?

Saturday, May 8
9 a.m. ET/PT Teen Titans Go! “Pig in a Poke” – The Titans are worried when Starfire says she has sent all of her money to a prince online, especially when it could be the clown prince himself.

9:30 a.m. ET/PT Total Dramarama “MacArthur Park” – After losing countless jobs because of the kids, MacArthur shows up at the school seeking revenge.

10:30 a.m. ET/PT Victor and Valentino “My Thirsty Little Monster” – Valentino discovers that Victor has been keeping a secret baby pet. Now Vic has to prove to his brother that he can care for it and train it so it won’t grow up to eat everyone in the house!

“La Planchada” – When Victor carelessly gives the kids of Monte Macabre chicken pox in a game of tag, he is visited by an urban legend ghost-nurse to teach him a lesson! 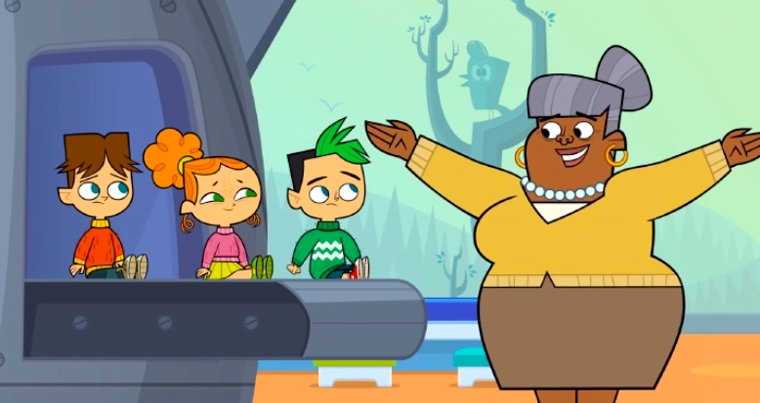 Saturday, May 15
9 a.m. ET/PT Teen Titans Go! “P.P.” – While stopping a museum theft, the Titans encounter the P.P. Goblin, who uses the Titan’s pet peeves against them.

9:30 a.m. ET/PT Total Dramarama “Last Mom Standing” – When Chef’s Mom and Leshawna’s Grandmother drop their loved ones off at the same time, it kicks off a dangerous competition for who is the most caring mother-figure.

Saturday, May 22
9 a.m. ET/PT Teen Titans Go! “A Little Help Please” – When they receive a distress call from the TTG animators and artists, the Titans must tone down their actions and avoid big adventures.

9:30 a.m. ET/PT Total Dramarama “Carmageddon” – Duncan is rattled when Chef, tired of having his car destroyed, buys a new one that is completely indestructible. 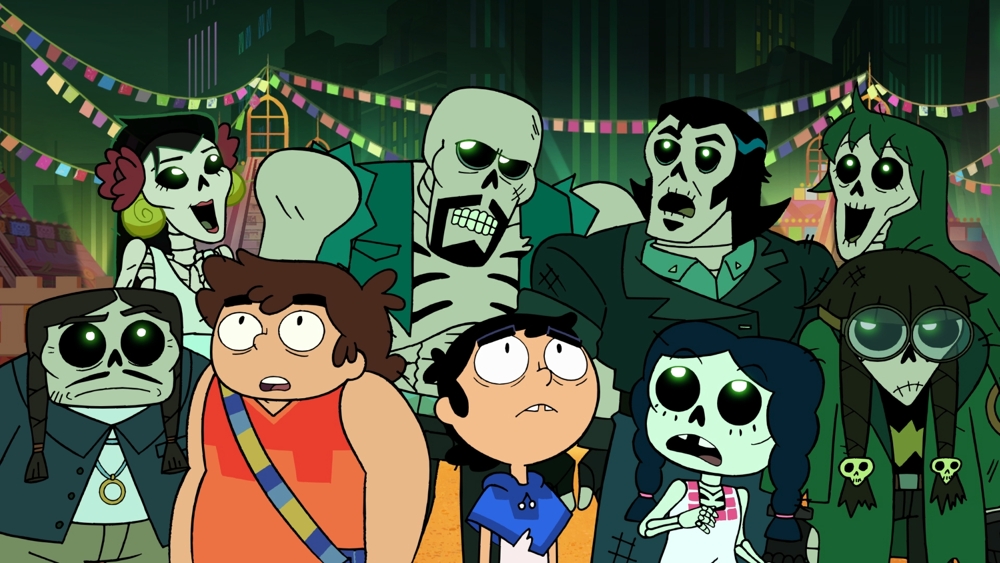 9:30 a.m. ET/PT Total Dramarama “Sugar & Spice & Lightning & Frights” – When two new kids show up at the daycare Duncan and Leshawna take issue with, not what makes them different, but what makes them similar to the newbies.

10:30 a.m. ET/PT Victor and Valentino “Through the Realms of Mictlan” – When their ghost friend, Cristina misses her train to the afterlife, Victor and Valentino must help her travel through eight perilous realms of the Underworld to reunite her with her family on the ninth level.

Monday, May 31
9 a.m. ET/PT Teen Titans Go! “Space House” – The Titans set off on an adventure in space, only to find out they’ll be sharing their Space House with the DC Super Hero Girls.