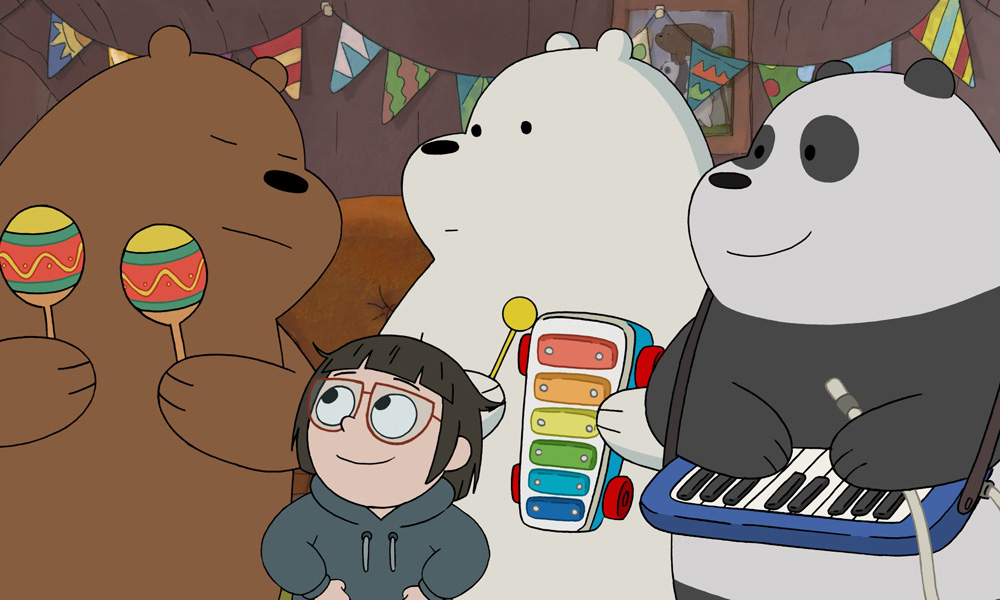 Stay cool with the ultimate ursine bros for the rest of the summer, as Daniel Chong’s Emmy-nominated animated series We Bare Bears returns to Cartoon Network with a fresh bear stack of new episodes beginning Monday, July 30. Fans will get more adventures with the adorable Baby Bears, and check in with pals Chloe, Ranger Tabes and Charlie.

Monday, August 6
7 p.m. ET/PT We Bare Bears “Best Bears” – The Bears must complete their Best-Man duties on the day of Darrell’s wedding.

Tuesday, August 7
7 p.m. ET/PT We Bare Bears “Crowbar Jones: Origins” – Grizz screens an epic amateur movie he just made for a focus group. But when he notices people are leaving he must figure out ways to keep the audience engaged.

Wednesday, August 8
7 p.m. ET/PT We Bare Bears “Hot Sauce” – A quest for their favorite hot sauce causes the Bears to get involved with a sting operation.

Thursday, August 9
7 p.m. ET/PT We Bare Bears “Mom App” – Hoping to finally get the mom-experience, the Bears use an app that’ll bring a mom right to their door.

Friday, August 10
6:30 a.m. ET/PT Mega Man: Fully Charged “Drilling Deep” – At school, Aki struggles with the side effects of his newly replicated Drill Man schematics; later, as Mega Man, he learns to control his Fire Powers in thwarting Drill Man’s assault on Skyraisers Inc.
“Videodrone” Mega Man must stop Hypno Woman from turning the students and teachers at Silicon Central into her mindless drones.
7 p.m. ET/PT We Bare Bears “The Limo” – To help distract Panda from his girl problems, Grizz and Ice Bear treat him to a ride in a limo.

Saturday, August 11
4 p.m. ET/PT Ninjago “Ninjago: Hunted Part 1” – Emperor Garmadon has taken control of Ninjago City where Lloyd retreats to the shadows. Meanwhile, the other Ninja and Young Wu are shipwrecked in the Realm of Oni & Dragon and find they are not alone. 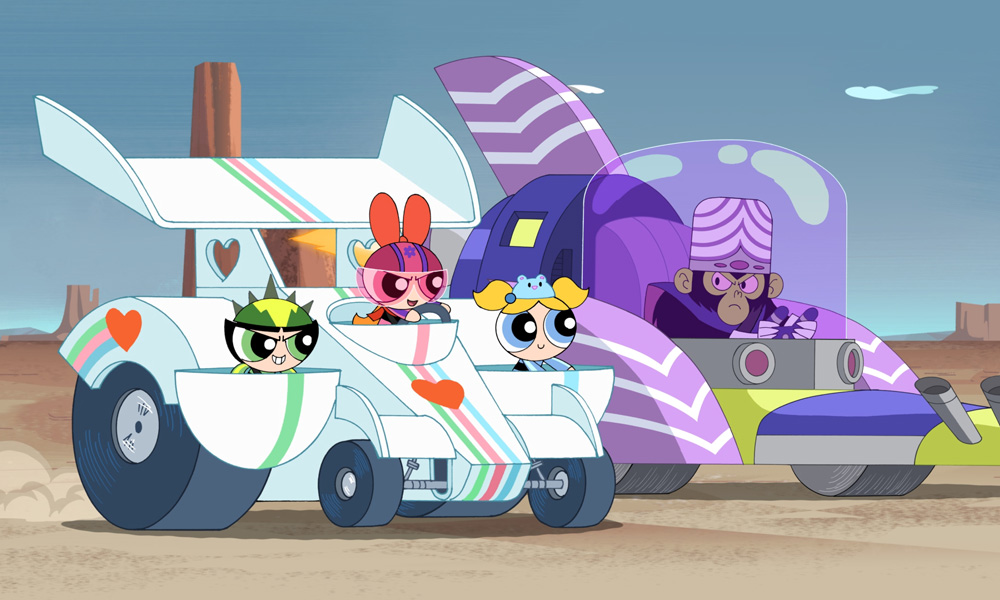 Sunday, August 12
4 p.m. ET/PT Powerpuff Girls “Total Eclipse of the Kart” – The Powerpuff Girls compete in a race against some of their most vicious villains, to win whatever is in the Mayor’s “Mysterious Box Of Mystery.”

Monday, August 13
4 p.m. ET/PT Teen Titans Go! “Tower Renovation” – What happens to the Titans after TEEN TITANS GO! to the Movies.
7 p.m. ET/PT We Bare Bears “More Everyone’s Tube” – Through another video browsing session online, we get more videos uploaded by the Bears and their friends.

Thursday, August 16
7 p.m. ET/PT We Bare Bears “El Oso” – In a flashback to long ago, Charlie has an adventure in the Mexican desert.

Friday, August 17
6:10 p.m. ET/PT UniKitty “Landlord Lord” – The Land Lord has threatened Master Frown and Brock with eviction unless they fix their apartment. Brock invites Unikitty and the gang to help. Instead of doing what the guys want to their place, she proceeds to do what she wants. 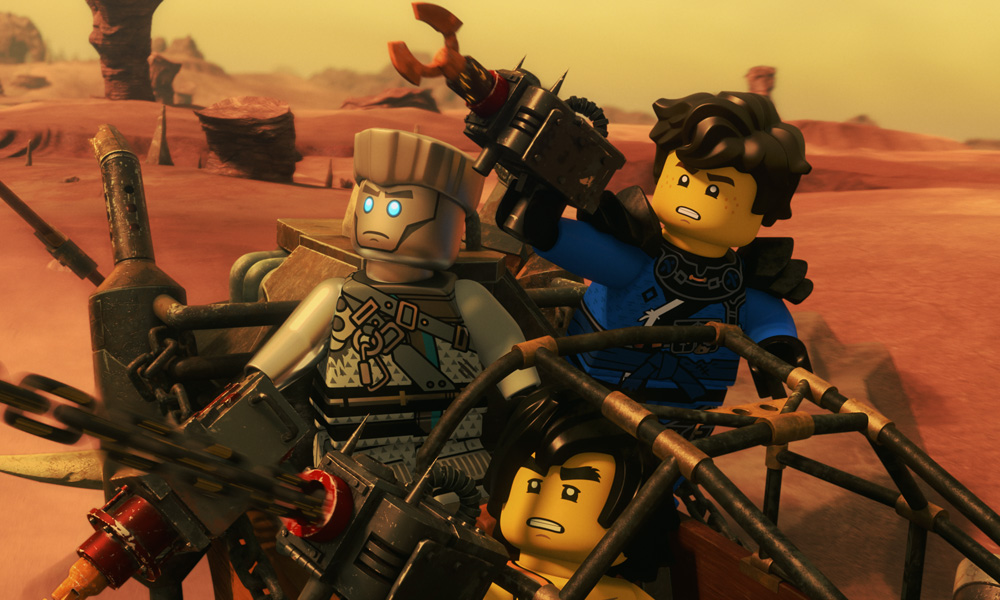 Saturday, August 18
4 p.m. ET/PT Ninjago “Ninjago: Hunted Part 2” – The headquarters to the resistance is breached and Lloyd scrambles to avoid capture. Meanwhile, the Ninja are caught by Heavy Metal, but find an unlikely ally.

Sunday, August 19
6:30 a.m. ET/PT Mega Man: Fully Charged “Please Rush Home” – A misunderstanding between Mega Man and Rush ends in the robo-pup running away from home, only to be reunited and reconciled during a confrontation with Wave Man.
“Blaze of Glory” – Mega Man and Suna must overcome a sibling dispute over what to do on their day off in order to stop Fire Man from overheating the city.
4 p.m. ET/PT Powerpuff Girls “The Long Skate Home” – After they get accused of a crime they didn’t commit, The Powerpuff Girls and The Derbytantes have to find a way to clear their name!
“Quarantine” – After a chemical spill, the girls and Mojo find themselves trapped together.

Monday, August 20
4 p.m. ET/PT Craig of the Creek “Ace of Squares” – Craig vows to make the game of Four Square fun again by challenging its most dominant player!

Tuesday, August 21
4 p.m. ET/PT Craig of the Creek “Doorway to Helen” – Craig makes a long distance connection with a kid that loves the creek as much as he does.

Wednesday, August 22
4 p.m. ET/PT Craig of the Creek “The Last Kid in the Creek”– A terrible curse leaves Craig as the only kid in the creek.

Thursday, August 23
4 p.m. ET/PT Craig of the Creek “The Climb” – Craig’s phone gets stuck in Mt. Sycamore, the tallest tree in the creek!

Friday, August 24
4 p.m. ET/PT Craig of the Creek “Big Pinchy” – JP leads his friends on a voyage to find the biggest crayfish in the creek.

Sunday, August 26
6:30 a.m. ET/PT Mega Man: Fully Charged “Nice on Ice” – An “unscheduled” TV appearance not only lands Aki in hot water for missing class, but sets Ice Man on a misguided mission to “unite” (i.e. freeze together) every human and robot couple in the city!
“Hard Times” – Mega Man must stop Blasto Woman from plundering the Museum of the Hard Age and its cache of military grade weaponry.
4 p.m. ET/PT Powerpuff Girls “In the Doghouse” – Buttercup must go it alone to save her family from a kidnapping.
“Salamander” – When the professor is kidnapped, the girls must go to a mysterious island to save him.