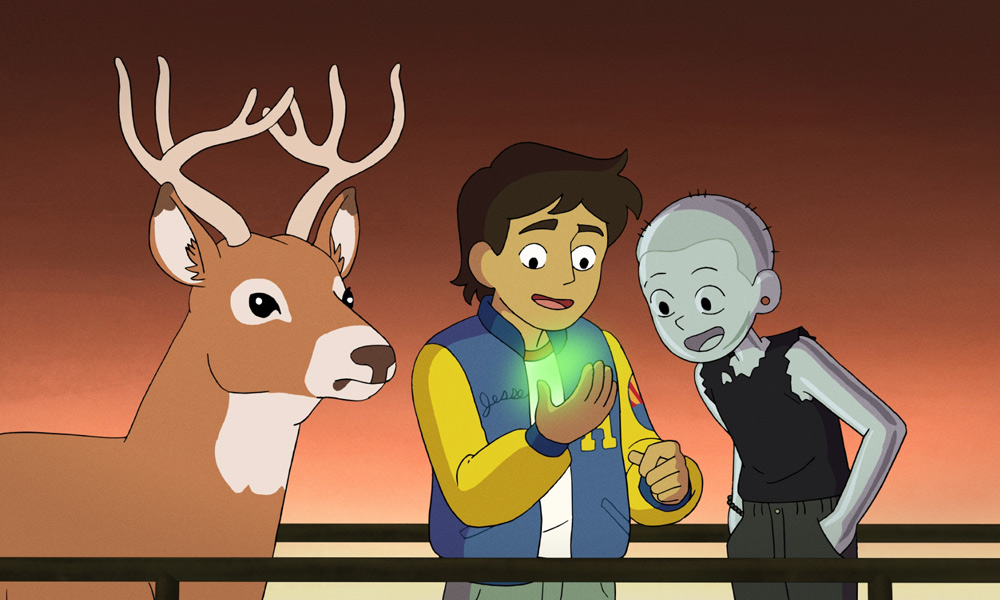 Celebrate a mind-bending start to the New Year on Cartoon Network with the second season premiere of Infinity Train on Monday, January 6 (7:30 p.m. ET/PT). Over a five-night event, fans can watch all 10 episodes from the newest season to follow Mirror Tulip, an escaped reflection from the mirror world, and Jesse Cosay, a 14-year-old jock from Arizona. As the pair finds themselves on the run from the mirror police, themes of identity, friendship and peer pressure arise.

Fans can keep the 2020 welcome train rolling with new episodes of Apple & Onion, Ben 10, Total Dramarama and debuting through January. 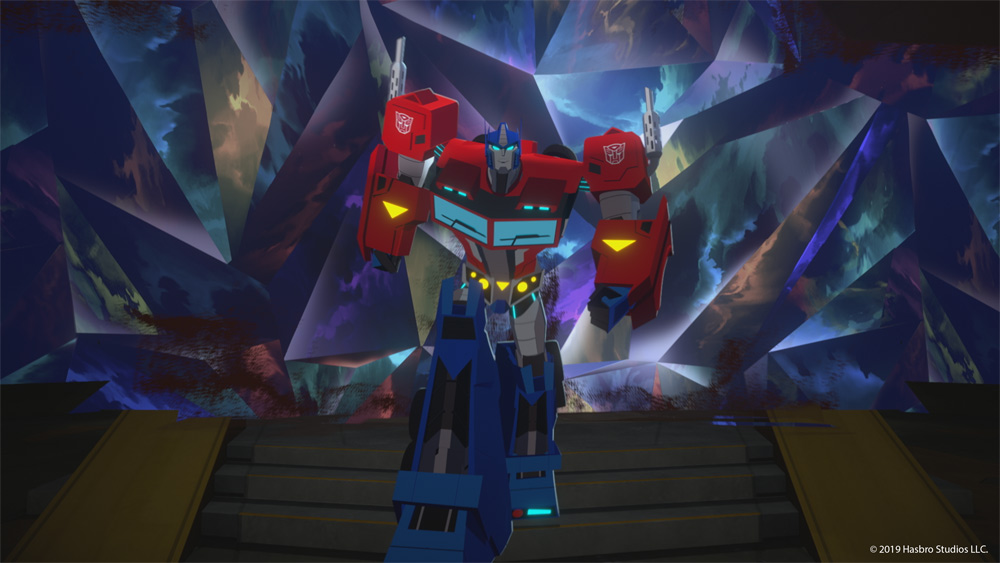 6:30 a.m. Transformers: Cyberverse “The Crossroads” Seeking a shortcut to Cybertron, the Autobots use a damaged SpaceBridge that takes them somewhere completely unexpected.

12:30 p.m. Ninjago “Krag’s Lament” Cole awakens inside an icy cavern belonging to a legendary beast, and attempts to escape, only to discover a surprising truth.

“Secret of the Wolf” The Ice Emperor summons an enormous ice Behemoth to attack Lloyd and his faithful wolf companion. 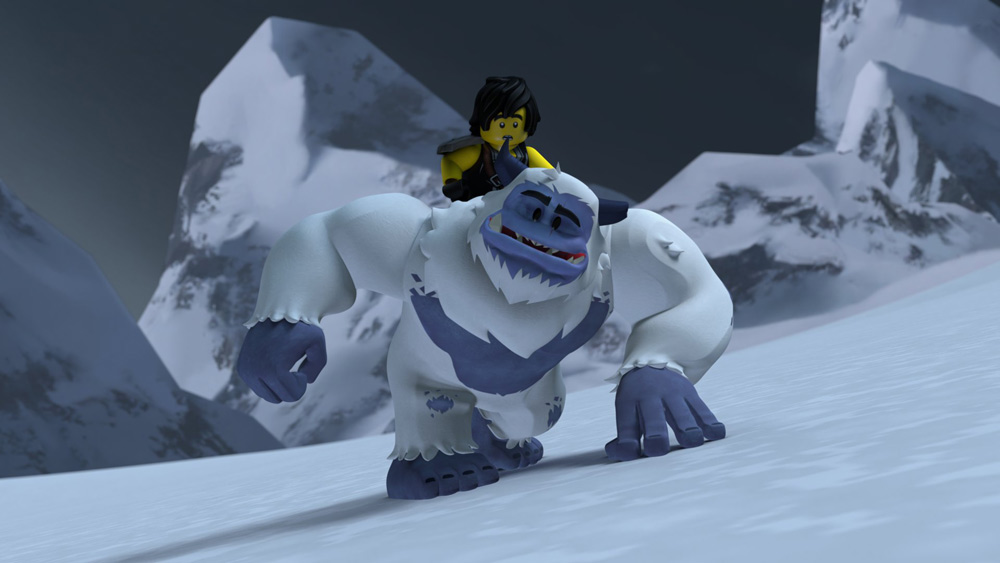 7:30 p.m. Infinity Train “The Black Market Car” Mirror Tulip tries to create a new life for herself outside the Mirror World.

7:30 p.m. Infinity Train “The Map Car” Mirror Tulip tries to help Jesse get his number down.

“The Toad Car” Mirror Tulip and Jesse get stuck in a car and face an unusual dilemma. 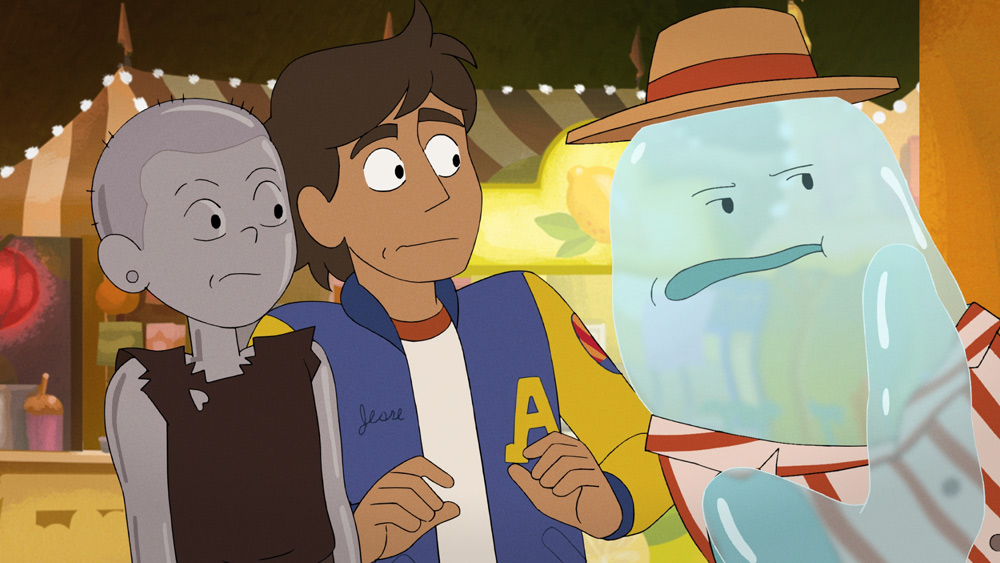 “The Lucky Cat Car” Mirror Tulip and Jesse enter a carnival car and have to compete for the exit.

“The Wasteland” Mirror Tulip finds herself in the wasteland outside the train.

“The Number Car” Mirror Tulip fights for her right to make her own choices. 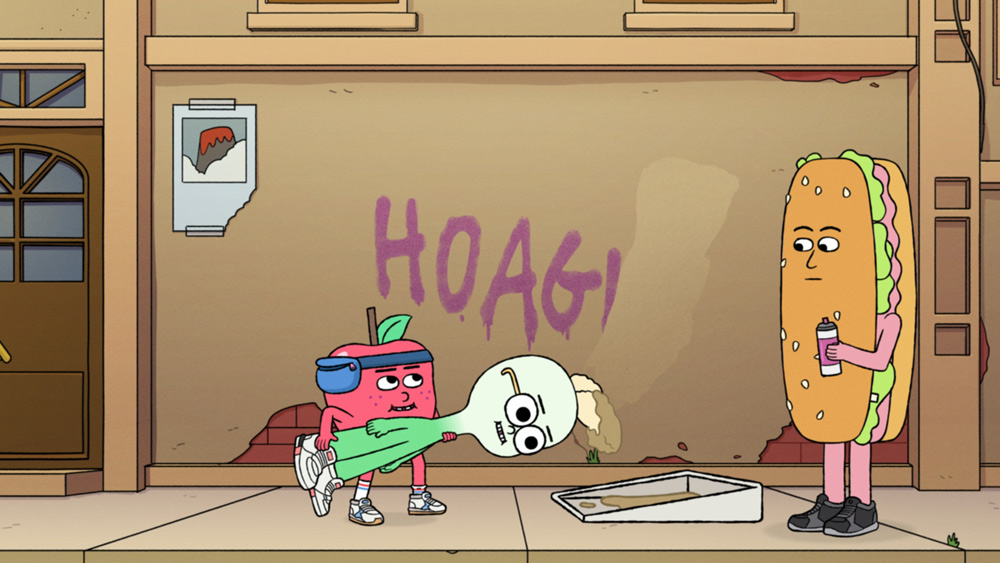 9:00 a.m. Total Dramarama “Glove Glove Me Do” Owen’s newly found gloves make him great at everything. But this greatness comes at a high price.

9:30 a.m. Apple & Onion “Sausage and Sweetie Smash” Apple and Onion must conquer their obsessions of sausages and a video game.

12:30 p.m. Ninjago “The Last of the Formlings” Akita tells the story of the “Choosing” and how she, and her twin brother, Kataru, went into the wilds to discover their animal forms.

“My Enemy, My Friend” The Ice Emperor’s terrible Ice Dragon strikes again, laying waste to the Ice Fisher’s village, forcing the ninja to go after Lloyd…

7:00 a.m. Bakugan: Battle Planet “Bakuzon at the Gates” Part 1: As the Dusk Forces storm the Numena Core Cell, infighting between the Awesome Ones and their allies threatens to tear them all apart. | Part 2: Tiko/Dusk Forces have coalesced into global power and are waging a no holds barred assault on the Numena Core Cell. 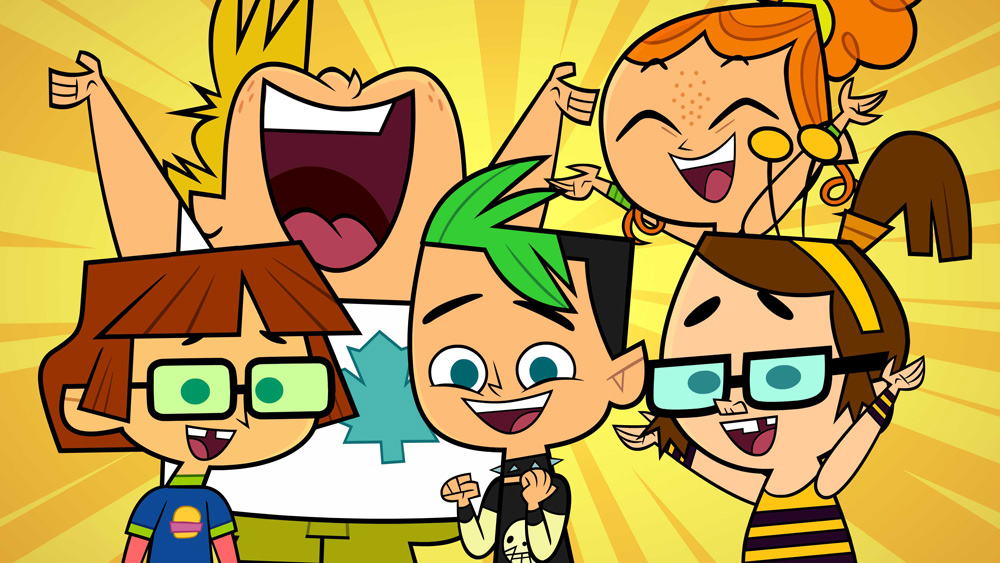 9:00 a.m. Total Dramarama “Robo Teacher” When a substitute teacher fills in for Chef, Duncan thinks it’s going to be the best day ever. He’s wrong.

9:30 a.m. Apple & Onion “Selfish Shellfish” Apple and Onion have to prove that they’re not selfish when they do their good deeds.

12:30 p.m. Ninjago “The Kaiju Protocol” Back in Ninjago City, Wu and Pixal attempt to locate the Never-Realm, and accidentally unleash a dreaded creature from the Departed Realm…

“Corruption” The story of Zane’s arrival in the Never-Realm and how he fell under the sway of the villainous Vex. 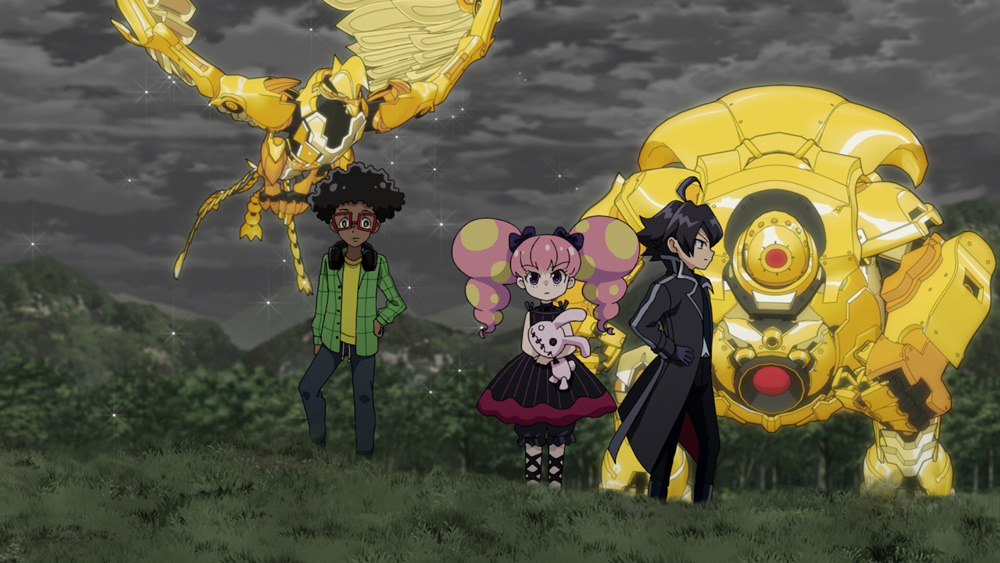 7:00 a.m. Bakugan: Battle Planet “Planet-Ception/United We Stand” The final showdown between Tiko and AO with the future of Earth and Vestroia in balance. | The Awesome Ones return home as heroes, wondering what battles await them in the future.

10:00 a.m. Ben 10 “Tokyo Fun Part 1: Big Bugg Bash” While in Tokyo, Team Tennyson comes face to face with a horrible secret, Japan’s hottest new restaurant is being run by the Bugg Brothers as a nefarious scheme to make loads of money off an unsuspecting public.

“Tokyo Fun Part 2: Slamming It Up” While on a visit to the Sumo Slammers Amusement Park in Tokyo, Team Tennyson gets to watch a genuine sumo wrestling match as part of the Global Games, but when the mischievous Twain Twins crash the event to avenge their mother’s medal snub years earlier, Ben must think things through if he is to stop the polarizing family!

10:30 a.m. Power Players “Sand Trap” Axel and the team take to the desert dunes of a playground sandbox as Madcap attempts to unearth an army of Spy Lizards from the same line as Galileo! 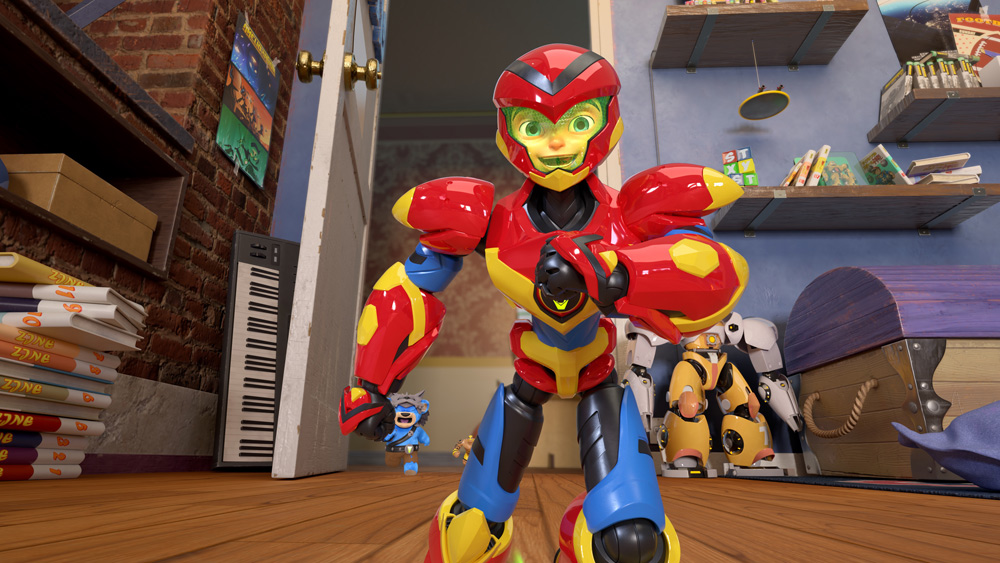 9:00 a.m. Total Dramarama “The Tooth About Zombies” When Gwen’s favorite event, the Zombie March, falls on the same day as Noah’s nightmare event, dental hygienist check up day, Gwen and Noah find a way to help each other out.

9:30 a.m. Apple & Onion “Apple’s Formula” Apple needs to find a funny formula that will land him a comedic in a movie.

12:30 p.m. Ninjago “A Fragile Hope” Having discovered the terrible truth of Zane’s fate, Lloyd finds himself imprisoned and alone in the clutches of the Ice Emperor.

“Once and for All” Nya, Jay, Cole and Kai face off against the Ice Emperor’s dreaded dragon, while Lloyd and his newfound allies, Kataru and Grimfax, confront the Ice Emperor himself. 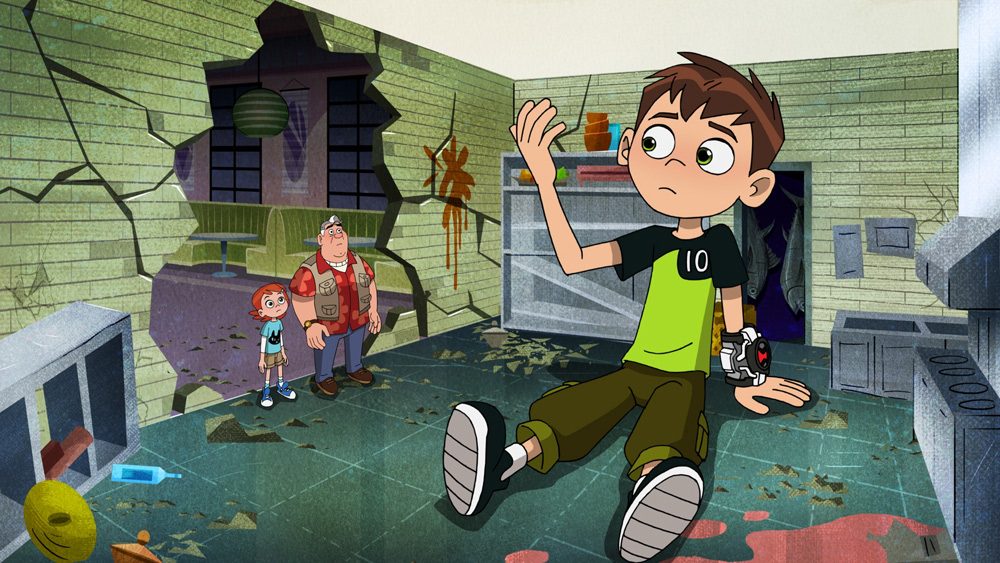 10:00 a.m. Ben 10 “Chicken in Chichen Itza Part 1: Pyramid Scheme” Team Tennyson visits the monuments of Chichen Itza, but when Ben learns about the possible existence of a mythical creature, the Quetzalcoatl, the hero takes it upon himself to find the feathered serpent himself.

“Chicken in Chichen Itza Part 2: The Wages of Fear” Team Tennyson help transport a caged Quetzalcoatl through the Yucatan jungle, only to encounter a saboteur, La Grange, who hijacks the precious cargo and leads our heroes on a high-octane off-road chase!

10:30 a.m. Power Players “The Best Team” When Madcap and his minions crash a soapbox derby, the team must stop the baddies and help Axel – stuck in a car with Luka – cross the finish line!

“Joyride” At a rummage sale with Uncle Andrew, Axel and Zoe must stop Madcap from turning her long-lost tank toy, Joyride, into an agent of mayhem!