Disney XD and Walt Disney Imagineering have teamed up with renowned stop-motion house Stoopid Buddy Stoodios for four uniquely Halloweeny spot that send favorite modern TV toons into the iconic world of Disneyland’s Haunted Mansion. We are ghoulishly pleased to be able to present two of these shorts to you ahead of their on-air debut!

The spots feature music and sound effects from the original Disneyland park attraction, with the original voices giving after-life to the Haunted Mansion haunts. Frequent park visitors will also note that the pun-filled tombstones are also lifted directly from the site. A new original apparition, Baby Boo, was created just for these spots and inspired by original concept art by legendary Disney artist Marc Davis — one of the Nine Old Men.

Here you can see what happens when the characters from Star vs. The Forces of Evil and Pickle and Peanut embark on an otherworldly adventure inspired by the classic attraction.

On Monday at 8 p.m. ET/PT, during the premiere of Milo Murphy’s Law, Star and Pony Head from Star vs. The Forces of Evil stumble into the wrong dimension and disturb Madame Leota from her restful trance.

Next Monday, October 10, at 6:30 p.m. ET/PT — during a spooky Halloween-themed episode — Pickle and Peanut search for their lost keys in the famous Haunted Mansion graveyard, where they meet brand new ghost Baby Boo and the infamous Hatbox Ghost. 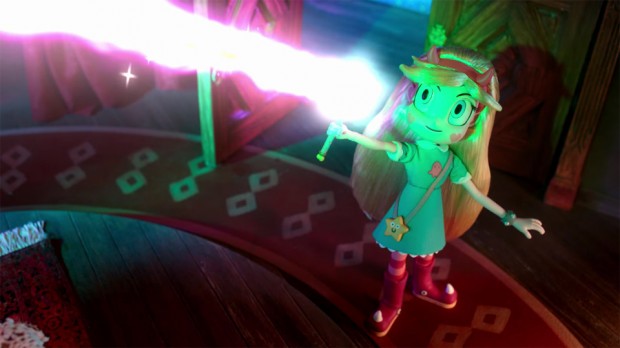