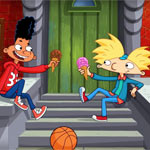 Nickelodeon has released a new video (narrated by creator Craig Bartlett) that serves as a sneak-peek at the return of everyone’s favorite football-head, Hey Arnold!: The Jungle Movie.

As Bartlett details in the clip, the special picks up only one or two years after the end of the original series (which happened almost 15 years ago in the real world). The characters are a little bit older, entering the 6th grade with some fresh back-to-school looks (complete with “cool new sneaks”).

Other cool tidbits: The fictional South American locale of  San Lorenzo the kids visit in the special is actually the island Arnold dreams about in “Parents Day.” The series is also referenced with an opening on the mysterious map Arnold finds in the back of his dad’s journal towards the end of the series.

The two-part Hey Arnold!: The Jungle Movie is set to debut this fall on Nickelodeon. Click the link for more details!

You may also like...
Related Topics:Craig Bartlett, Hey Arnold!: The Jungle Movie, Nickelodeon