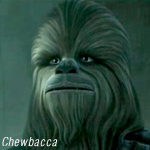 There’s plenty of life left in the Force (in animation, at least), with Chewbacca set to appear on Star Wars: The Clone Wars and Robot Chicken’s third Star Wars parody set for summer release.

Up first is the return of everyone’s favorite wookiee, who will appear in the one-hour finale of season three of Star Wars: The Clone Wars. The episode is set to air April 1 at 8 p.m. ET/PT on Cartoon Network. This isn’t Chewie’s first animated appearances — he also showed up on the animated segment of the infamous 1978 Star Wars Holiday Special.

In bringing the classic character to animation, the crew behind the series consulted with the actor who played Chewbacca in the feature film series, Peter Mayhew.

“Bringing Chewie to The Clone Wars is very special for us, and it wouldn’t be right without Peter’s involvement and blessing,” said Dave Filoni, supervising director. “Peter and Chewie are one and the same; he brings so much of himself to the character and it was important for us to capture that. Otherwise, it just wouldn’t feel right. Having his input was great; he was able to add all the little mannerisms and details that he knew from living with Chewie for more than three decades.”

And as a special bonus for Chewie’s Canadian fans, the season finale will air on Teletoon in two parts, with the first part airing a week early, March 25, and the finale on April 1.

The release includes more than three hours of bonus features, including some Blu-ray exclusive features, and is the first Blu-ray release in the series.

Robot Chicken: Star Wars Episode III arrives with a suggested retail price of $14.98 for DVD and $19.89 for Blu-ray.