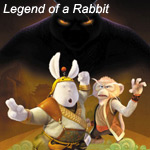 China’s Tianjin North Film Studio has signed a breakthrough deal with Cartoon Network, giving the cabler TV rights to the stereoscopic 3-D effort Legend of a Rabbit for Australia, New Zealand, India and Taiwan, Variety reports. This is the first Chinese animated film acquired by the network.

Rabbit will have a day-and-date theatrical launch in major Asian territories in late July, with Cartoon Network air dates to follow six to eight months later. According to Elliot Tong, head of international distribution at Tianjin North Film Studio, “I believe this is the first time that Cartoon Network has acquired a Chinese animated film, and it’s the perfect platform for our film.”

The kung fu adventure flick, directed by Sun Li Jun, follows a humble farmhouse Rabbit who takes on Beijing’s most diabolical Panda to fulfill a promise to a dying kung fu master and save the Kung Fu Academy. The project was completed by a 500-person animation team for about $12 million.