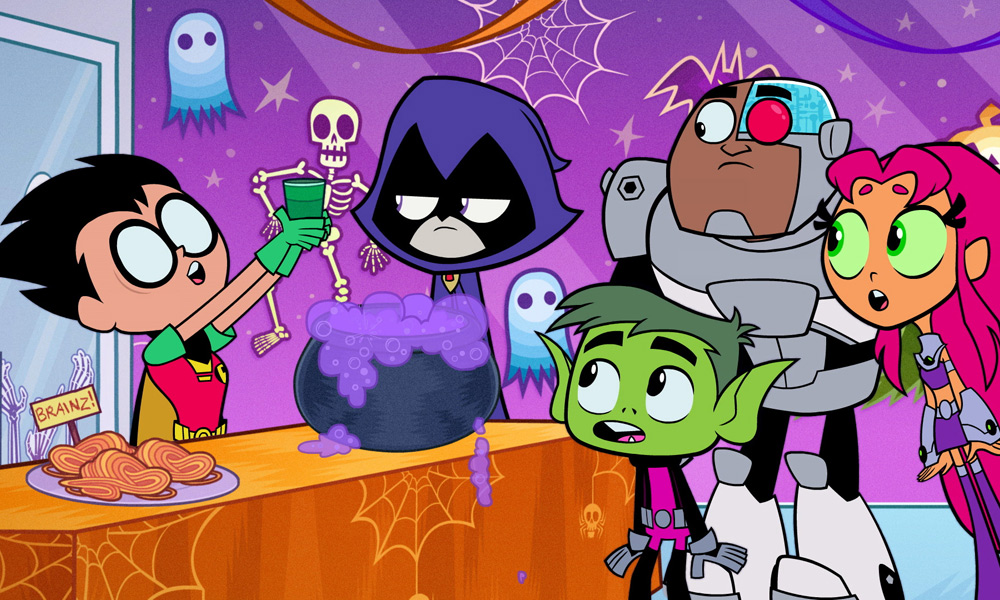 October is going to get terrifyingly tooned-up on Cartoon Network, with new seasonally appropriate episodes bowing throughout the month. Things kick off with the hilarious crossover episode “Cartoon Feud” on Friday, October 4 (6 p.m. ET/PT), in which Control Freak forces the Titans and the Scooby Gang to compete on Family Feud — followed by new themed episodes of Teen Titans Go! 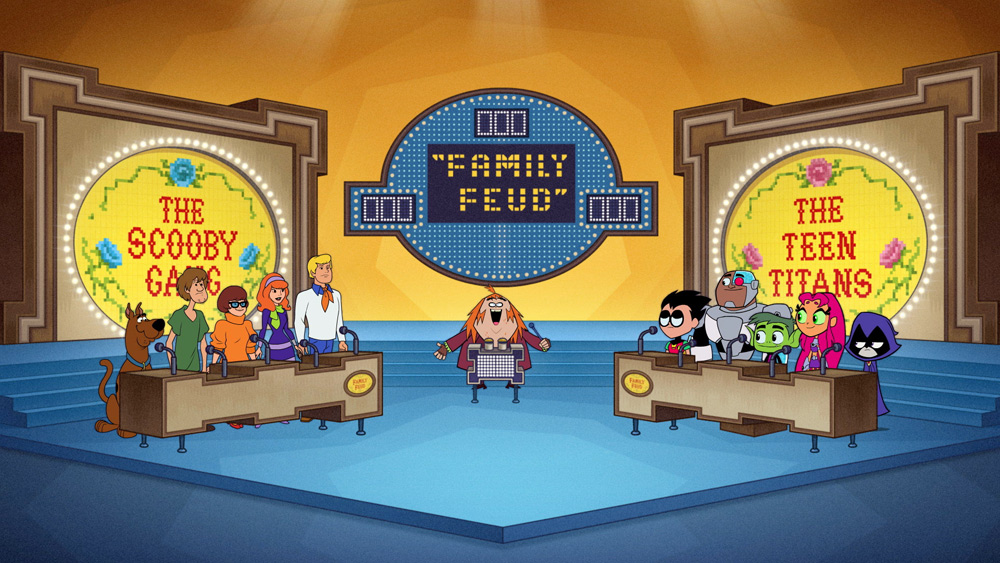 “Curse of the Booty Scooty” When Robin “Booty Scooty’s” his booty off, the Titans must go on an adventure to recover it.

“Collect Them All” After the other Titans are turned into collectibles and disappear, Robin must search yard sales and stores to find them.

“Butt Atoms” Despite Robin’s warning, the Titans mess around with atomic toots and end up causing a worldwide plague. 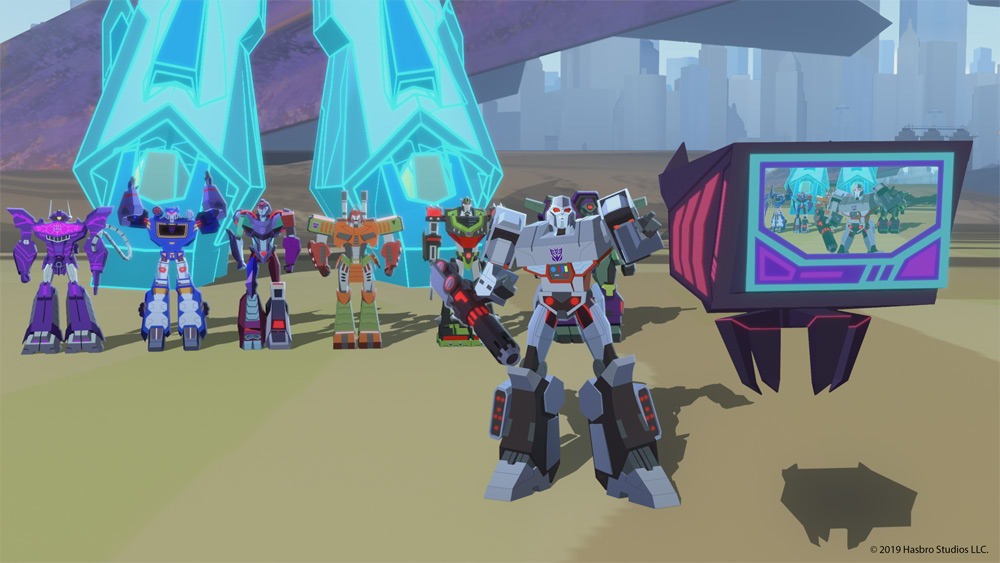 9 a.m. Victor and Valentino “The Great Bongo Heist” The boys forget to get Chata a gift for Abuela Day and in a panicked move, they pretend that the bongo drums they borrowed from Xochi are for her. Knowing they have to return the drums, Victor & Valentino pretend to be burglars to steal the bongos back.

“Escape from Bebe Bay” When Vic & Val accidentally turn themselves and Don into babies, they must escape a daycare center in order to change back to their normal ages.

“Band for Life” When Vic and Val tag along with Xochi to a punk concert, they want to prove that they’re cool enough to hang out with her. But in a desperate attempt to be cool, they wind up destroying the concert.

“Tez Says” Vic & Val are in awe of the new magician in town, but things go awry when they agree to help him out with a new trick – despite Chata’s wishes.

10 a.m. Mao Mao, Heroes of Pure Heart “Flyaway” When Adorabat’s spirit transcends her body during a meditation exercise, Mao Mao and Badgerclops have to figure out a way to return her to the real world.

“Baost in Show” When Bao Bao returns, and the King makes him his pet, Mao Mao must rescue his ex-partner.

12 p.m. Ben 10 “The Bentathlon” After stuffing their faces with gyros, Team Tennyson makes their way to the real Greece in the Omni-Copter, but when they are suddenly captured by the Forever Knight mid-flight, Ben ends up in a coliseum, where he is pit against old foes: Iron Kyle, Queen Bee, and the Ground Hawgs!

“Prey Or Play” After receiving a super-exclusive ticket to Adrenaland, Ben leaves behind Grandpa Max and Gwen to enjoy the perks of being the parks only attendant, but when he learns he’s not alone, our hero must now contend with the only kid who could afford the price of admission: Billy Billions!

12:30 p.m. Power Players “Access Denied” When Axel and the team try to figure out what Sarge Charge’s secret weapon is, they get ejected from the house by his newly upgraded security system and must fight their way back inside before Madcap does.

“Swing Set Jet Set” Axel and the team battle Princess SugarSalt for possession of Bearbarian’s hammer, traded to her by one of their own – Galileo! 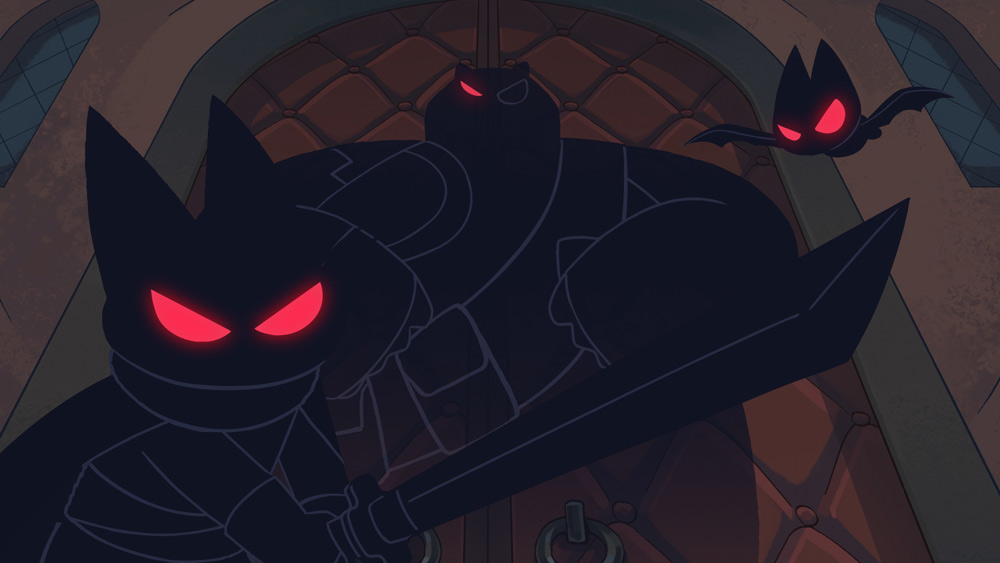 Sunday, Oct. 6
7 a.m. Bakugan: Battle Planet “Bakugan Breakers/ The Awful Ones” Magnus’s new team of Bakugan Brawlers overhear Lightning’s warnings of a sick Core Cell and decide to capture the dog to find its location. Then, Magnus heads into the Labyrinth to claim the Fortus Core Cell for his own. 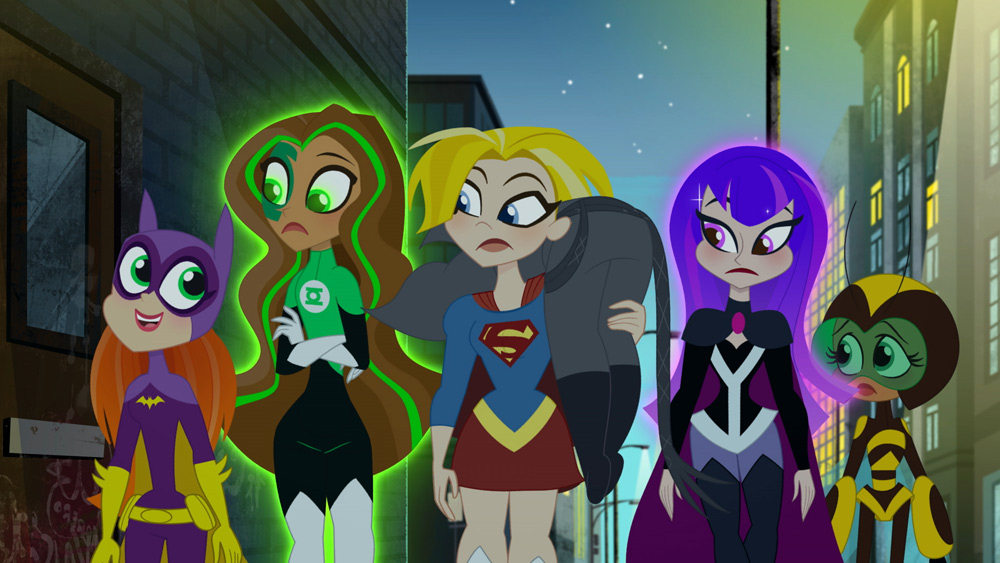 9 a.m. Victor and Valentino “Forever Ever” When Vic and Val do a sloppy job cleaning up in Maria Theresa’s attic, they accidentally set off a time loop, trapping them in an endless series of chores forever! They must figure out how to stop the loop and return time back to normal.

“Dance Reynaldo Dance” Vic is desperate to win the cash prize for the dance contest in Monte Macabre and is frustrated that his partner Val won’t let him call all the shots. Instead he chooses a different partner: Reynaldo. But Vic pushes Reynaldo too hard to execute his artistic vision. Eventually, he learns that in order to be a success, you have to be equal partners.

10 a.m. Mao Mao, Heroes of Pure Heart “Fright Wig” When the King cannot overcome his fears, he abuses having the Sheriff’s Dept. on call.

“Sleeper Sofia” When the Sky Pirates infiltrate Sheriff HQ, they put our heroes in danger!

12 p.m. Ben 10 “Beware of the Scare-Crow” During a visit to the farm of Penny Bennyson’s grandfather, Team Tennyson is constantly haunted by a Scare-Crow that’s come to life, but when Ben discovers that Aristocrow is behind it all, our hero must defeat Aristocrow’s master, the steam-powered Steam Smythe, if he is to save his cousin’s farm!

“The Night Ben Tennyson Came to Town” Team Tennyson travels to Wheeler, “the liveliest mining town on Route 66”, but when Ben becomes paranoid that the Forever Knight is out to get him, he must try to convince his fam while also stopping his new foe from destroying the town.

12:30 p.m. Power Players “Side Kicked” Zoe builds her own battle suit in hopes of joining Axel’s team. The only problem? She can’t shrink! Hijinks ensue as a full-sized Zoe tries to assist Axel & co. in a battle against Pyrant and his army of mind-control drones.

“Porcupunk Rock” Madcap turns to Axel and his team for help after a sonic upgrade to Porcupunk threatens to bring down the house. 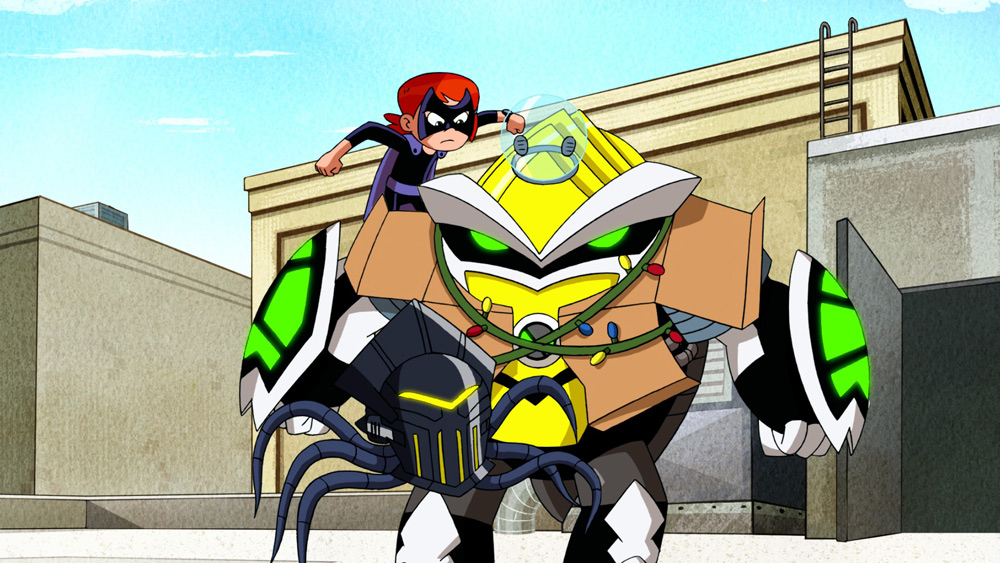 Sunday, Oct. 13
7 a.m. Bakugan: Battle Planet “Mask of Pride/The Graveyard of Courage” Driven by revenge, Magnus decides to go back into the labyrinth, face the AO and claim the Fortus Core Cell energy for himself. Then, super charged by the Fortus Core Cell, Magnus wages war on the AO.

Monday, Oct. 15
6 p.m. Teen Titans Go! “TV Knight 5” Batman pretends to be sick to avoid work so he and Commissioner Gordon can run around town watching their favorite shows. 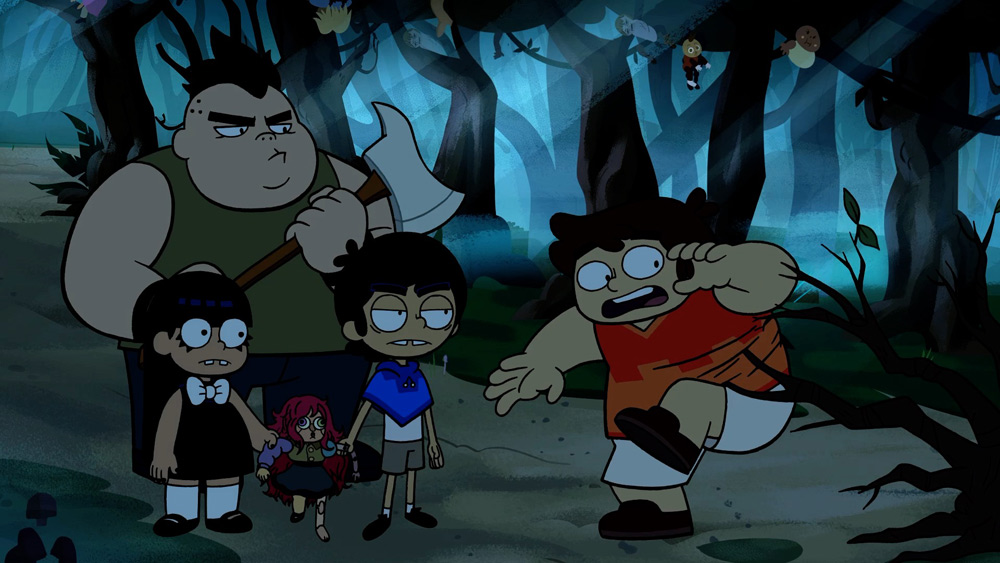 Saturday, Oct. 19
6:30 a.m. Transformers Cyberverse “Parley” The Autobots and Decepticons attempt to forge an alliance in the face of the threat posed by Starscream.

9 a.m. Victor and Valentino “Tree Buds” Vic and Val build a treehouse and Val dismisses Vic with a frivolous task so he can build the treehouse exactly how he wants. But when Vic returns unknowingly with a branch from El Arbol Vampiro, Val’s perfect treehouse turns into a nightmare!

12 p.m. Ben 10 “And Xingo Was His Name-O” When a new Xingo app mysteriously appears on Gwen’s tablet, Ben can’t help himself and activates it despite his cousin’s disapproval, springing a trap that transports Ben in the animated world and Xingo back in the real world. It’s the ol’ switcheroo!

“Fear in the Family” Ben and Gwen can’t wait for the Omni-Copter to arrive at the Great Pyramids, but when bad weather disrupts their flight, they soon come face-to-face with The Fogg and its spawn: The Fogg Family!

12:30 p.m. Power Players “All Trick No Treat” On Halloween, Axel gets too caught up in the scares and loses track of the fun – just in time for an infiltration by the worst trick ‘r’ treater of all, Madcap!

“Iced Out” Madcap’s latest creation, the Ice Crusher, puts the whole city in a deep freeze, forcing Axel and the team to face him in a game of high-stakes hockey or risk slip-sliding into another ice age! 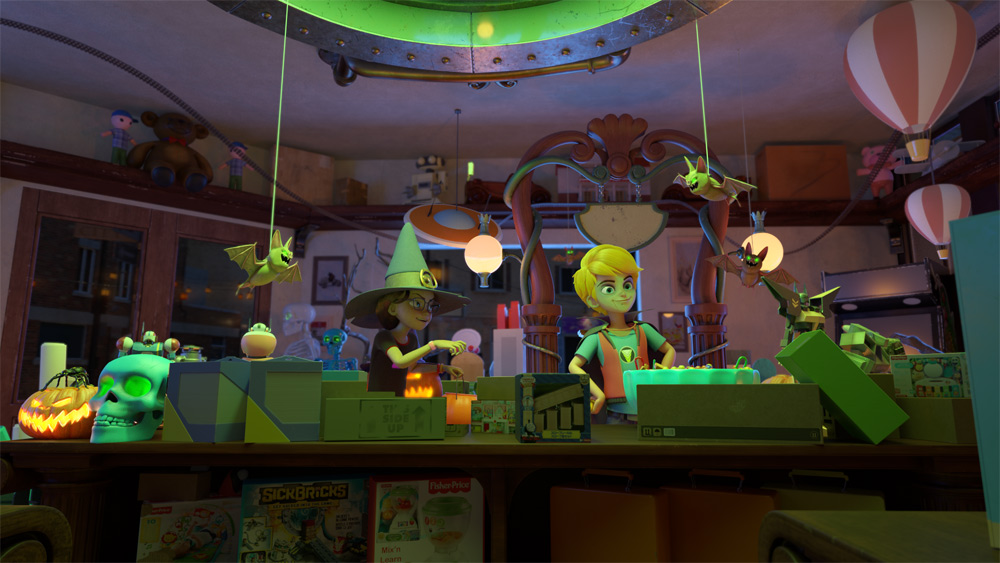 7:30 p.m. DC Super Hero Girls “Soul Sisters” The girls must track down Katana, a mysterious warrior who’s stealing the souls of Metropolis’s villains. Meanwhile, Diana’s new friend Tatsu is a perfect match for her in every way, but may have a connection to Katana. 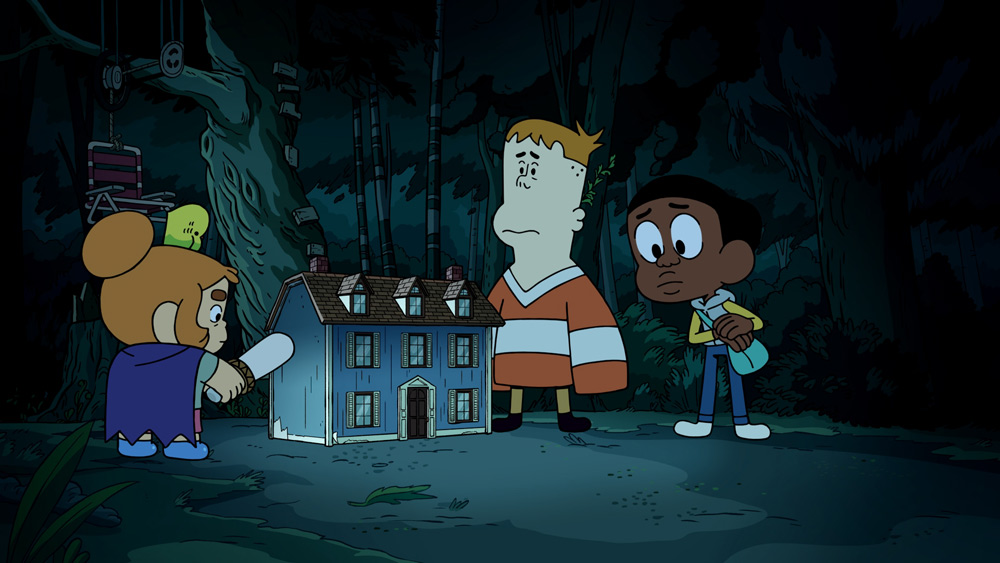 9 a.m. Victor and Valentino “Lonely Haunts Club 2: Doll Island” In order to prove their bravery, V&V head to a haunted island to retrieve a special doll, but Charlene and Pineapple are intent on getting it first.

“Cat-Pocalypse” When Vic gets sick and is stuck in his room, he spies on Pineapple and becomes convinced that Pineapple is creating an army of zombie cats. Val agrees and the two become obsessed with stopping Pineapple before it’s too late!

“El Silbon” Victor sets up a haunted corn maze, but the town kids think it’s lame. Vic decides to make the maze scarier by enlisting the help of El Silbon (The Whistler) to really scare the kids, but El Silbon has plans of his own.

“On Nagual Hill” Vic & Val take over a forest hill and build an epic waterslide, disturbing the plants and animals that normally inhabit it. But when a Nagual (a human with the power to transform into animals) transforms Vic into a chicken and Val into a donkey, they learn to sympathize with the animals and understand the world a bit more.

10 a.m. Craig of the Creek “The Haunted Dollhouse” Craig and his friends find themselves being followed by a creepy doll and its haunted dollhouse.

“Heads of the Family” Team Tennyson stops in at a fringe family reunion, and Ben encounters a whole lot more than kooky cousins— namely, Kevin 11 and the Bugg Brothers, whose latest crackpot invention sparks a series of hilarious head-swaps between all parties.

12:30 p.m. Power Players “Gathering Dark” Axel must help Bearbarian overcome his secret fear of the dark to stop Dynamo from stealing his ride.

“Bobbie Not Blobby” Axel discovers that the culprit behind Bobbie Blobby’s missing mech-suit is Masko, who only wanted to clean out its clogged clay cannons, but lets the suit fall into the hands (or tentacles) of Dr. Nautilus – intent on flooding the sewers!

Sunday, Oct. 20
7 a.m. Bakugan: Battle Planet “Too Much/Who Are You?” The Hide Matrix goes crazy and a simple AO training mission turns into a complicated rampage. Then, after the loss of their HQ, the AO is a little off, but in talking to Benton Dusk, they learn a new sense of purpose for their team. 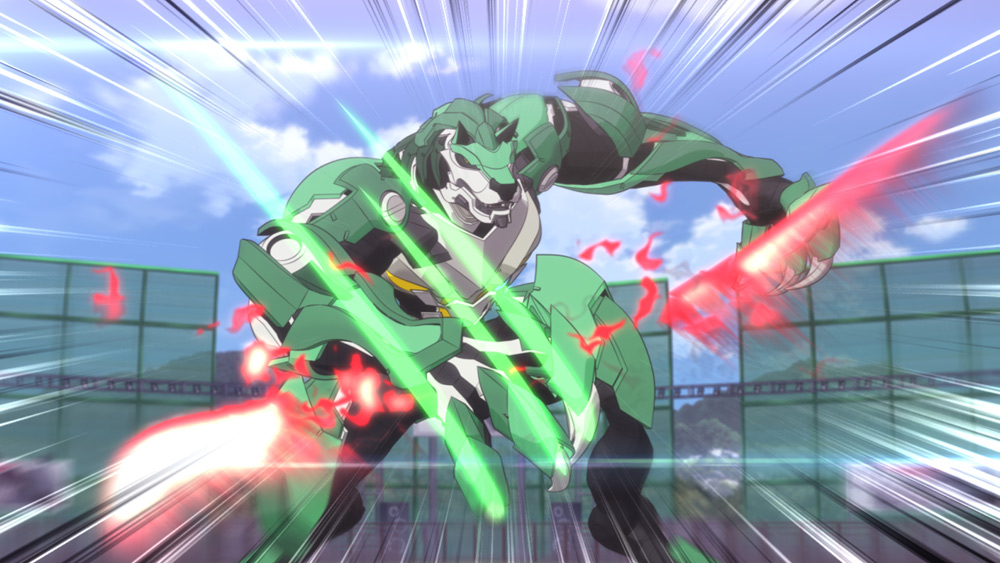