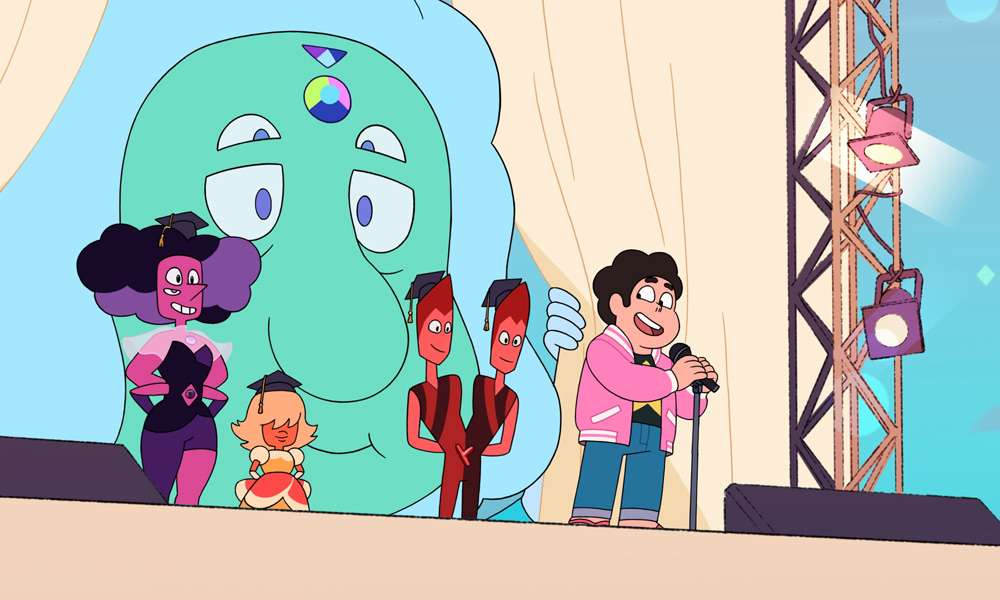 All is merry and bright on Cartoon Network this December with the premiere of four new episodes of Steven Universe Future on Saturday, Dec. 7 (8 p.m., ET/PT), with more episodes continuing to air Saturdays through the month.

In the epilogue limited series, after saving the universe, Steven is still at it, tying up every loose end. But as he runs out of other people’s problems to solve, he’ll finally have to face his own. Haunted by the past and lost in the present, Steven begins manifesting new, uncontrollable powers that the Crystal Gems have never seen from him before. What does it all mean, and what does Steven want for his future? 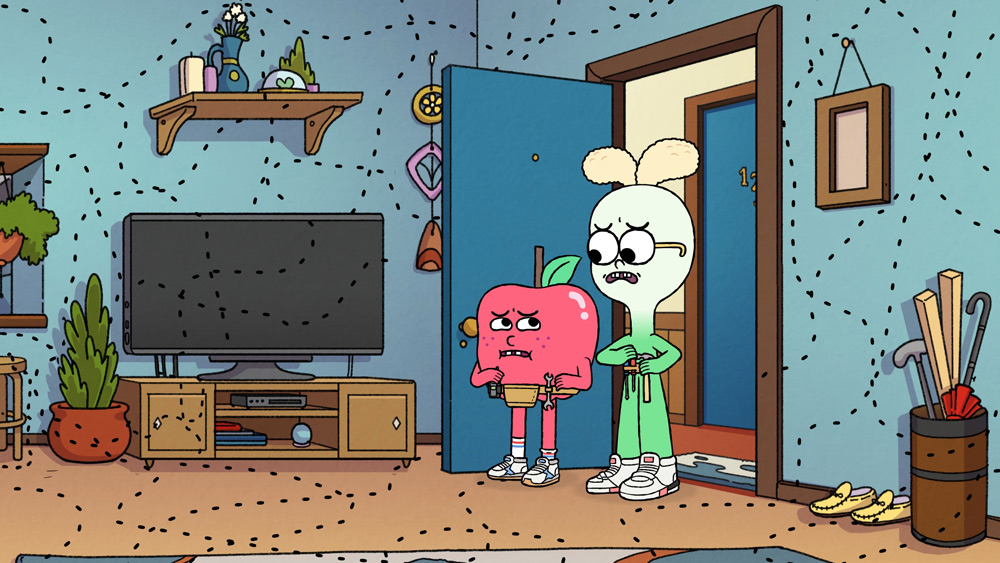 Sunday, Dec. 1
7:00 a.m. Bakugan: Battle Planet “Girl Power/Return to the Fold” When Lia battles with China Riot, they eventually come to an understanding as China finally realizes she’s been set up by Benton/Tiko. | On the run and with options dwindling, the AO turn to Shun’s father, Ichiro Kazami, for help.

Saturday, Dec. 7
6:30 a.m. Transformers Cyberverse “Party Down” An Autobot party turns into an uncontrollable brawl that could destroy them all!
9:30 a.m. Apple & Onion “Positive Attitude Theory” Apple and Onion spend a day in Falafel’s shoes and use their positive attitude to prove he shouldn’t be so grumpy.
“Follow Your Dreams” Apple and Onion need to find a dream to follow, so that their lives don’t head nowhere.
8:00 p.m. Steven Universe Future “Little Homeschool” Welcome to Little Homeschool, a place on earth where Gems from all over the universe can come learn how to live together peacefully! But there’s one Gem who refuses to attend.
“Guidance” Amethyst has been helping Little Homeschool Gems find jobs on the boardwalk, but Steven isn’t sure about her approach.
“Rose Buds” Steven gets a surprise visit from some old friends, and an even more surprising introduction to some new ones.
“Volleyball” Steven is determined to help Pink Diamond’s original Pearl heal the scar on her face.

Sunday, Dec. 8
7:00 a.m. Bakugan: Battle Planet “Kazami Family Feud/Greatest of the Kazami” Masato attacks, but the AO soon realize that Ichiro is keeping a Golden Bakugan captive, forcing them to choose between the lesser of two evils! | Shun makes an impassioned plea to Ichiro, but it is too late as the Kazami compound is overrun by Bakuzon and the Visvus Cell is lost. 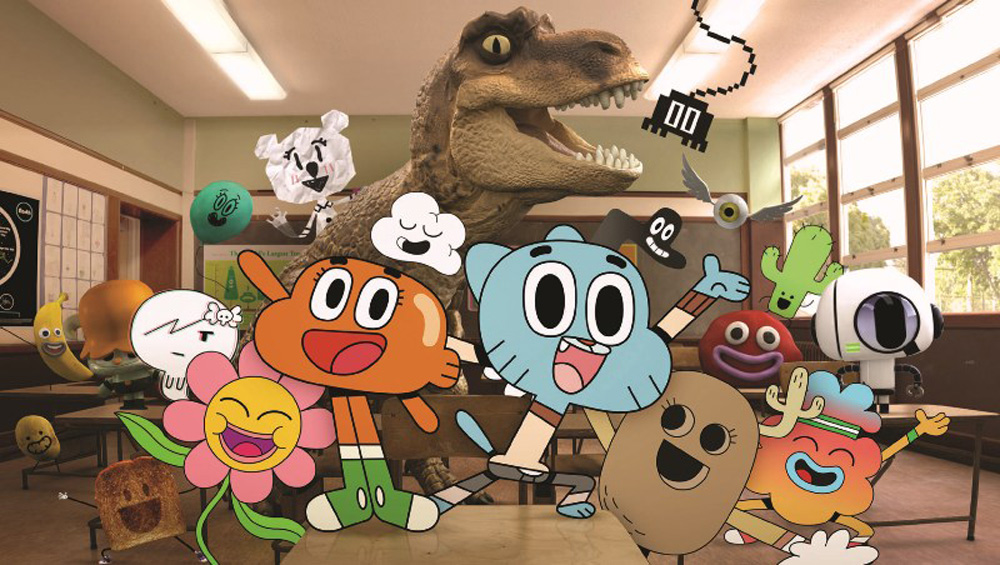 Sunday, Dec. 15
7:00 a.m. Bakugan: Battle Planet “Our Ugly Selves/Trhyno Lives” Abandoned in the Vestroia Labyrinth, the AO must deal with their personal losses and, worse, the Bakuzoned Awful Ones! | When the AO and Magnus form an alliance to free the Golden Bakugan, their differences lead to a horrible sacrifice for Dan and Lia. 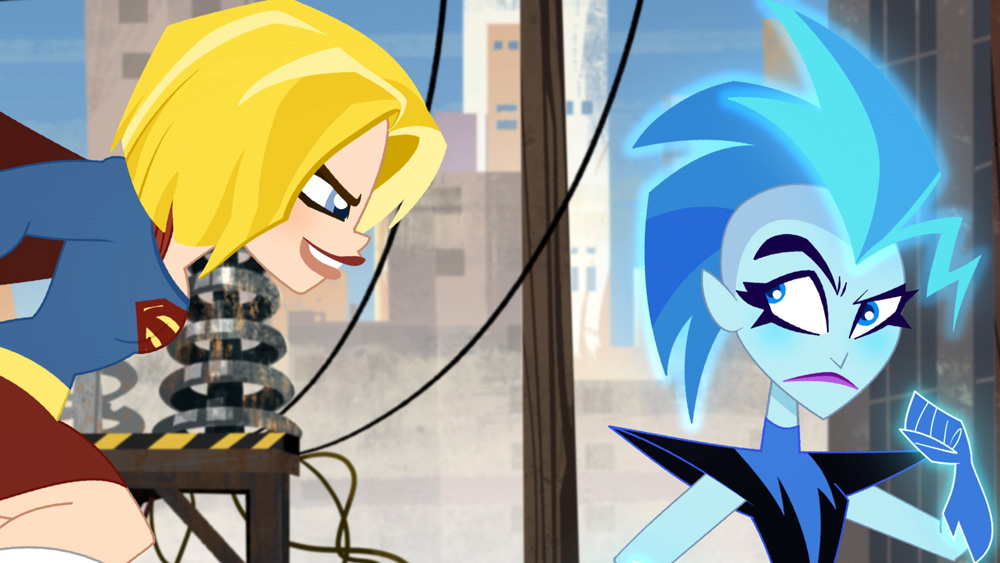 Monday, Dec. 16
12:00 p.m. DC Super Hero Girls “#TheGoodTheBadAndTheBizarre” Everything is going well for Kara Danvers, both as a teen and a superhero, until she starts taking the blame for things she didn’t do, and the emergence of a new supervillain threatens to destroy Supergirl’s hard-earned reputation

Tuesday, Dec. 17
12:00 p.m. DC Super Hero Girls “#BackInAFlash” After an embarrassing incident ruins Barbara Gordon’s reputation, rather than owning it and moving on, she decides it’s easier to harness The Flash’s newly discovered ability to travel back in time and alter the space-time continuum.

Wednesday, Dec. 18
12:00 p.m. DC Super Hero Girls “#PowerSurge” When Supergirl is presumed dead after a battle with Livewire, Kara Danvers decides to reinvent herself with a new look, a new personality, and a new name, Power Girl.

12:00 p.m. DC Super Hero Girls “#ScrambledEggs” Thanks to a home economics assignment, the students are paired up and given an egg to “care for” over a weekend. But when tragedy befalls egg after egg, what should be an easy assignment escalates into a madcap romp with super-high stakes!

Friday, Dec. 20
12:00 p.m. DC Super Hero Girls “#DramaQueen” Oliver Queen must face off against his greatest rival yet, Mortimer Drake, while Green Arrow also finds himself up against a new foe, The Cavalier. 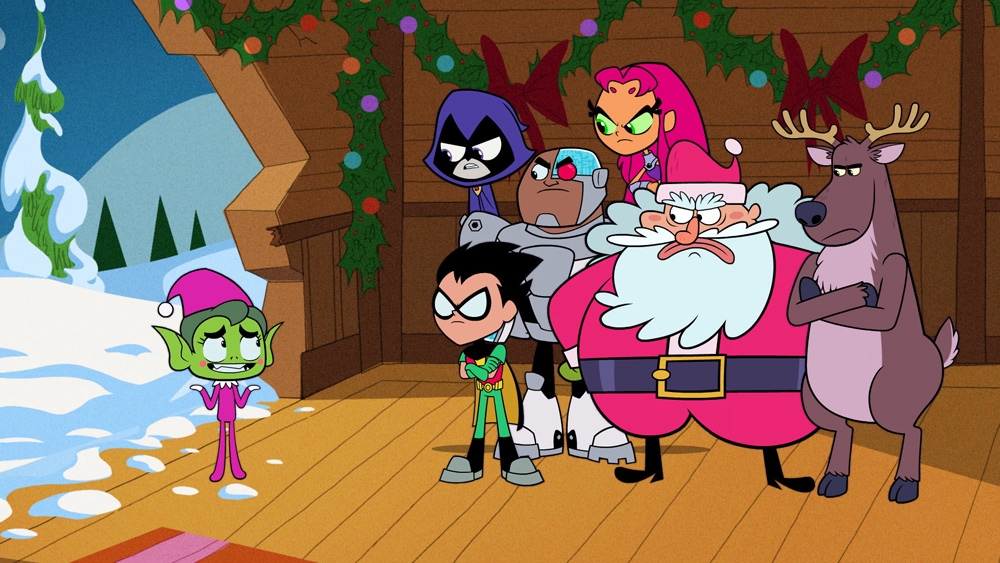 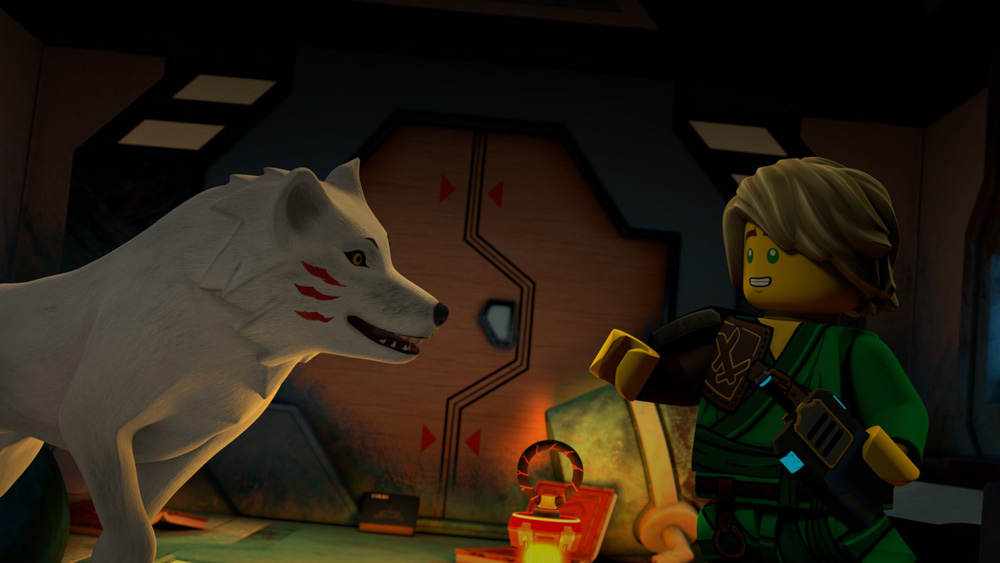 Sunday, Dec. 22
7:00 a.m. Bakugan: Battle Planet “The Healing Challenge/The Golden Drome” As the AO struggle to hold together, a discovery is made involving the Golden Bakugan, a Golden Drome, and curing of a Bakuzoned Gorthion. | While Dan and Drago enter the Golden Drome to heal Trhyno, the rest of the AO defend the Golden Drome from a militia of human hunters. 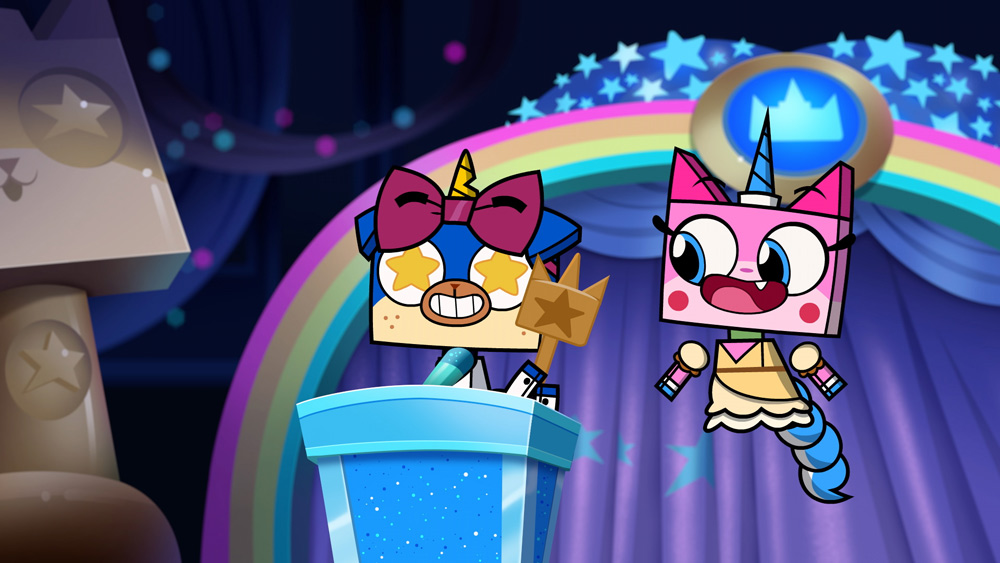 Tuesday, Dec. 24
6:00 a.m. Unikitty “Late Night Talky Time” The moon is bored of taking the nightshift, since everyone’s always asleep. So Unikitty leads the gang in putting on an over-the-top late night talk show to keep the moon occupied.
“Welcome to the Unikingdom” After Unikitty finds out that tourism is down, she recruits the gang to make a tourism video to inspire people to visit the kingdom. But after calamities come one after another, Unikitty begins to think the video is going to be a disaster.
“Time Capsule” The gang puts their favorite items in a Time Capsule to send 100 years in the future, but they get stuck inside right before the door seals.
“Music Videos” Unikitty hosts a live music video countdown show for the kingdom, presenting the ecstatic audience with the top 4 music videos in the Unikingdom, featuring our favorite characters.
“Brock Most Wanted” When Master Frown starts ruining parties to earn a promotion from his bosses, the Doom Lords, Brock accidentally gets blamed for the calamity.
“Bedtime Stories” When Puppycorn can’t fall asleep, Dr. Fox uses an invention to bring classic bedtime stories to life. But the gang’s presence leads to some surprising twists in these popular tales.
“Grown Up Stuff” Puppycorn doesn’t want to grow up. To ease his woes, Unikitty spends the day teaching him all the fun things about being an adult.
“Stop the Presses” Richard’s newspapers aren’t selling, so his friends pull out all the stops to put the printed word back on top.
“Castles and Kitties” Score Creeper traps the gang in a fantasy role playing game where they must follow a complex set of rules to win their freedom.
“Brain Trust” Dr. Fox accidentally transports the gang inside her brain, where they must control her movements to complete a dangerous experiment.
“P.L.O.T. Device 2: Beyond the Bored Dome” Dr. Fox reprograms the P.L.O.T. Device to only generate boring events, but the gang can’t help but add drama and excitement to every scenario.
“Sick Day” Dr. Fox catches a “common cold” and does everything in her power to cure herself, ignoring the gang’s pleas that she takes the day off and rest.
“Borrowed” Richard discovers his library books have been borrowed by Master Frown and sets off on a crazed mission to return the books before they’re overdue.
“Best Best Friends” Master Frown and Brock attend a friendship-themed competition intending to ruin it for everyone else, but soon discover their own friendship in need of repair.
“The Escape Room of Doom” The gang infiltrate an escape room game center to thwart Score Creeper, but their former foe claims he only works there to pay the bills.
“The Unikingdom Awards” Unikitty throws an elaborate award show for everyone in the Unikingdom, including Master Frown and Brock, but tensions rise when Frown fails to win an award.

Sunday, Dec. 29
7:00 a.m. Bakugan: Battle Planet “The Golden Forge/A Deep Hibernation” As Dan and Drago battle to free Trhyno from Tiko’s infection, they learn the history of Vestroia and the nature of Golden Bakugan. | Trhyno must give Dan and Drago the power they need if they are to have any chance in stopping Tiko from destroying both Vestroia and Earth 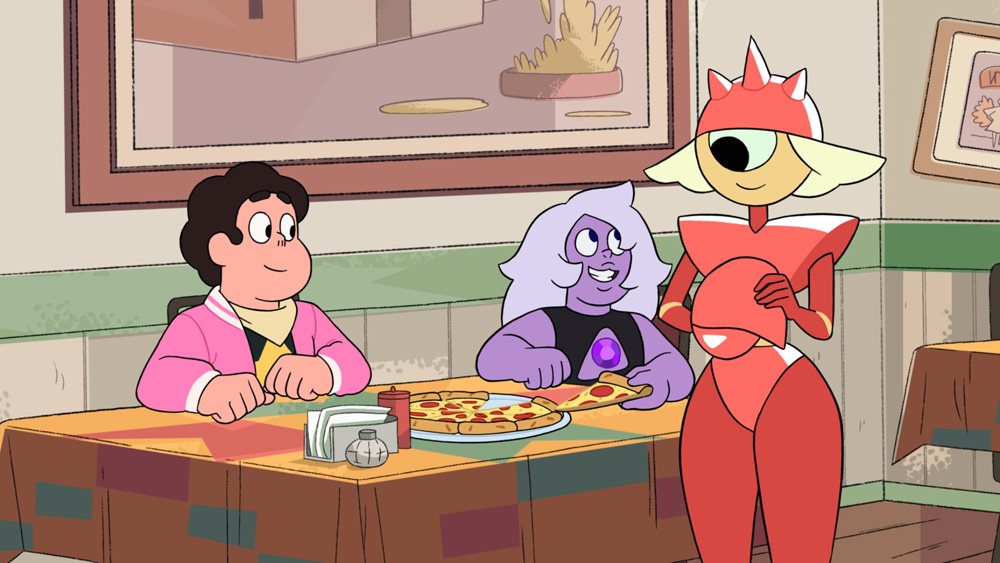