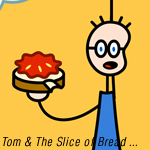 Cake Entertainment has signed on to distribute the kids’ animated series  Tom & The Slice of Bread with Strawberry Jam & Honey and will represent it at the MIP-TV market.

Created by Andreas Hykade, the series is a co-production of Studio Film Bilder, SWR, BR and WDR.

The series consists of 52 five-minute episodes about Tom, who encounters many new characters and adventures while pursuing the titular treat. Already a success in Germany, Tom & The Slice of Bread with Strawberry Jam & Honey has been airing on KI.KA since December 2005, where it has enjoyed an average 66% market share of the daily prime-time target group.

“What sets Tom & The Slice of Bread with Strawberry Jam & Honey apart from the crowd is its striking visual style and its sense of humor,” says Tom Van Waveren, Cake’s CEO and creative director. “The way in which Andreas Hykade has applied his film making skills to this project gives it a very special look, tone and feel. It means that you sit through this series as through watching a collection of short films, which is a true joy. And, children love it as well!”

You may also like...
Related Topics:Andreas Hykade, Cake Entertainment, MIP-TV, Tom and the Slice of Bread with Strawberry Jam and Honey