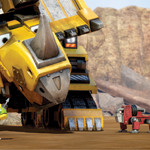 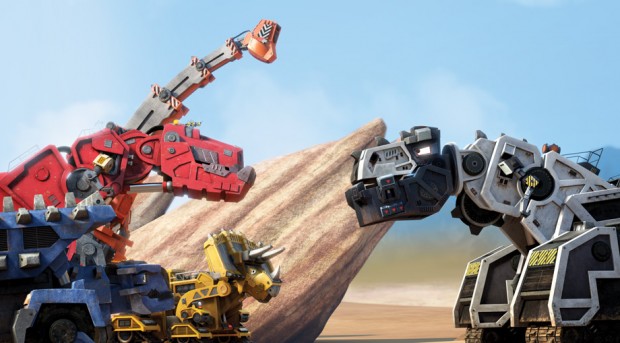 DreamWorks mixes vehicles and dinosaurs for Dinotrux, the first original series under its Netflix deal.

Mashing up dinosaurs and trucks — two perennial favorites with kids — seems like an instant winner of an idea for an animated show. But for Ron Burch and David Kidd, the executive producers of Dinotrux, a new DreamWorks Animation Television series debuting Aug. 14 on Netflix, the series needed to dig deeper to hit home with kids.

“We do see them as mini movies,” says Burch of the show, which is the first original series the studio has created for Netflix. “And we score them that way and we mix them that way and we feel that the shows have all the elements you should get in a good movie – action, heart and a little bit of comedy.”

Kidd adds that the characters — each of which is based on both a real dinosaur and a real construction vehicle — had distinct personalities. “Their very silhouettes began to dictate character to us,” he says.

Based on the popular children’s book series by Chris Gall, Dinotrux is set in the Mechazoic era, where dinosaurs keep to their species-specific herds, the series follows a Tyrannosaurus Trux named Ty, who befriends a Reptool named Revvit. Together they demonstrate to other Dinotrux the power of working together as they fend off the threat of D-Structs.

“What we liked about this is it combined a lot of different ideas, like dinosaurs being the superheroes of the animal world because they controlled the plant for hundreds of millions of years, and construction vehicles being the superheroes of the vehicular world,” says Kidd. “So you combine those two, suddenly you begin to think about teams, you begin to think about things like the Avengers.”

The experience of the characters also mirrors in many ways the lives of the kids aged 4-6 who are the show’s target audience. “They all live in herds, family herds, then they all go off to school or preschool and they have to mix with new creatures, new kids, from different herds and they have to figure out how to get along, how to work together, “ says Kidd.

Burch says they decided to keep the show as grounded in reality as possible. “We obey the laws of physics; we try to keep it as real as we can, given our world,” he says.

“We decided to start with a world that would look and feel very much like the real world,” says Kidd.

That extends to character design, too. “We felt that the truer the characters looked to the construction vehicle and to the dinosaur, the more real they would seem,” Burch says. “Which means that all the characters are made of metal, all of the parts are rigid and any flexibility comes from mechanics, not from a kind of cartoony bendish-ness.”

Of course, while that created a terrific look, it also created enormous challenges for our animators.

“What the animators have been able to do is sort of remarkable,” says Burch. “Using a lot of eye acting and larger gestures that cover whole bodies, they’ve pulled off this kind of miracle of getting emotion out of what are ostensibly mechanical characters with fewer options than even say a Muppet.”

Such limits have technical benefits, as more bandwidth can be devoted to creating the look of the world and the characters themselves instead of in complicated facial controls or rendering of cloth, hair or skin.

The Netflix model has worked well for the showrunners. Being able to plan out an entire season without waiting for a backend pickup has its benefits, as does releasing episodes in occasional batches instead of a weekly timeslot.

“We get to live with our shows for a longer period of time because we drop 10 or 13 episodes on Netflix in a bunch,” says Kidd.

“We pick goals and we work toward them and we’re also trying to keep a balance between action comedy and heart in every single episode but also over the course of the whole season,” says Burch.