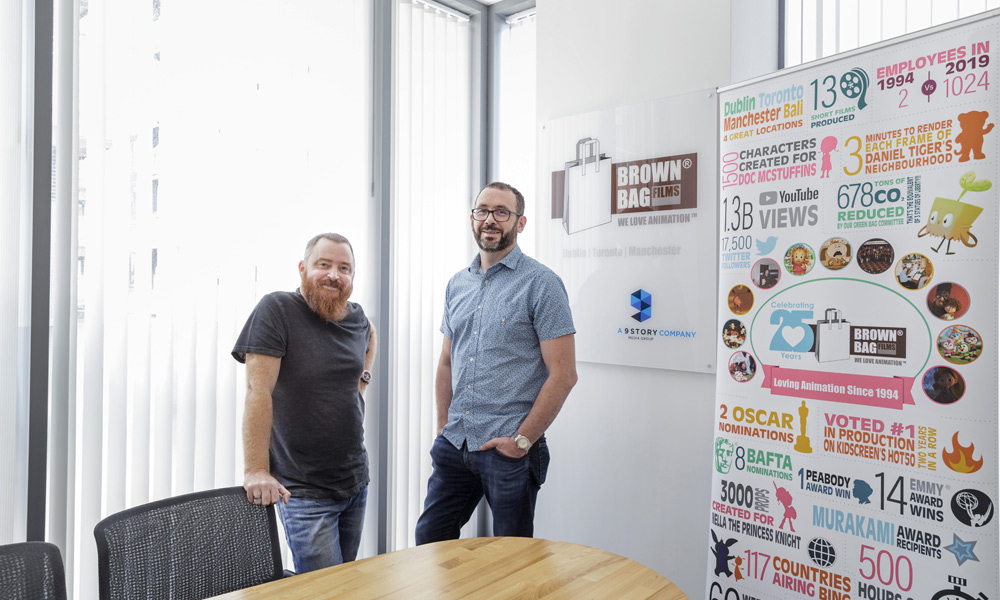 ***This article originally appeared in the November ‘19 issue of Animation Magazine (No. 293)***

Long before the big Irish animation boom of the past decade, Brown Bag Films founders Cathal Gaffney and Darragh O’Connell were just a couple of students who got kicked out of college for making their own short films! As the story goes, the talented due borrowed 2,000 Irish pounds and spent 1,500 on a photocopier, a month’s rate and a month’s deposit, and used the remaining 500 as working capital.

Flash forward 25 years, and Brown Bag has a staff of about 1,100 spread out in studios in Manchester, Toronto, Dublin and Bali. The shop has produced two Oscar-nominated shorts (Give Up Yer Aul Sins , Granny O’Grimm) and numerous Emmy and Peabody Award-winning series, including beloved titles such as Doc McStuffins, Vampirina, Daniel Tiger’s Neighborhood, Noddy in Toyland, Olivia, The Octonauts and Peter Rabbit. In 2015, the success of the studio led to its acquisition by Toronto-based Canadian giant 9 Story. 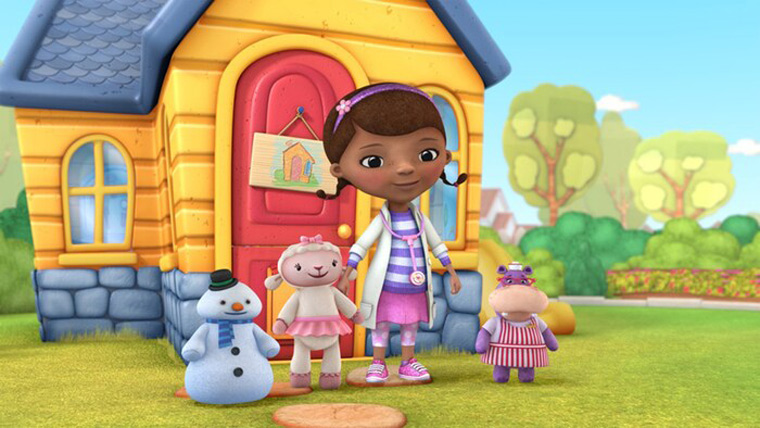 “Darragh and I started Brown Bag straight after we left college,” recalls managing director Gaffney. “Effectively, we’ve never had a job, never worked for anybody else. Our only job has been Brown Bag. So, straight from college, we went to running a small little studio, which grew slowly and organically over the years. The two of us were the sole owners right up to the point that we joined forces with 9 Story Media Group, and we sold to them in 2015.”

As creative director O’Connell points out, “At the risk of dating ourselves, when we first started everything was pre-digital. All our work was hand drawn, shot on rostrum cameras and edited with actual film. When you made a creative decision, you had to stick with it! Everything was so limited, and yet we had huge fun sellotaping cameras to bicycles and mixing pixelation with cel animation — whatever it took to get an idea across!”

O’Connell says when the duo first told their families they wanted to work in animation, they were in shock and thought they were throwing their lives away. “Now, I feel we have helped to put animation on the map in Ireland, where it is considered a real career and no longer gives the parents of young artists heart attacks,” he says with a smile.

Gaffney says a career highlight was getting Oscar nominations for his two acclaimed shorts. “That, to me, was more being able to create an environment where creativity can thrive, rather than focusing on any individual talent,” he says. “So it’s really about creating an environment where lots of people can do great work in the studio. Not based on any one individual talent, but a complete talent collective of great animators, directors and producers.” 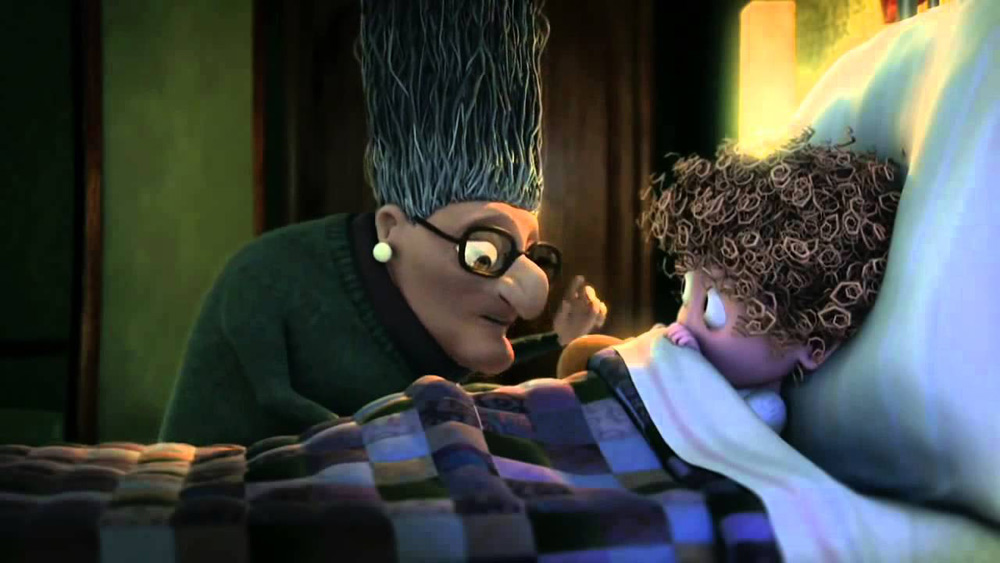 Both O’Connell and Gaffney believe that while technology has made making changes through various stages of animation easier, audience expectations have also increased exponentially. “If you look at Toy Story or any of the great 3D animation that’s on any TV channel around the world, the quality of the lighting, the rigs and everything is so much better,” says Gaffney. “So people take it for granted that great animation is the default. I think the tools are certainly getting better, but people’s expectations constantly need to be met and challenged. The day you accept the status quo is the day you’re not going to achieve something beautiful.”

“At the end of the day, I always say computers are expensive pencils,” he adds. “So you just need to make sure you’ve got the right pencils in the artists’ hands to allow them to do good work.”

Of course, the team at Brown Bag have had their share of challenges through the years, Gaffney notes pensively. “I always say that over the 25 years it feels like we’ve had a different company every three years. We’ve changed our business model, we’ve changed our strategy, we’ve changed everything about what we do almost on a three-year cycle. You have to have this constant reinvention and this constant evolution in your business, there’s no option to stay still.”

One of the constant challenges has been making sure the right team is working on the right projects. “It doesn’t matter what’s on somebody’s CV,” adds Gaffney. “If they don’t fit with the culture of the business, and they’re not right for the company, it won’t work out.”

For instance, the studio’s latest project is Sadie Sparks, produced with Cyber Group Studios. Aimed at the coveted Kids 6-10 demo, the 2D & CGI show follows the daily misadventures of a teenage girl trying to master her newly discovered powers, with the begrudging help of a grumpy, magical rabbit named Gilbert. The 52 x 11’ series is set to premiere on Disney Channel in EMEA, and has recently been picked up by Discovery Kids Latin America as well as Sony’s POP and Tiny POP in the U.K. 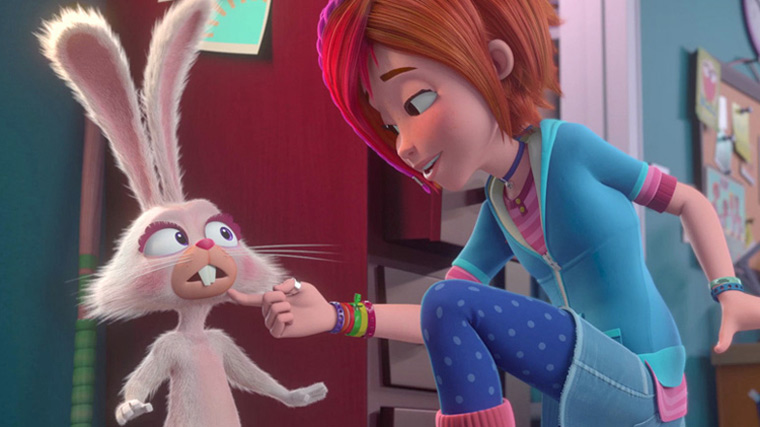 These days, O’Connell says he is really enjoying going back to directing projects. “I’m always on the lookout for the next great project that’s coming our way.” Adds Gaffney, “We’re making great shows for some great partners, while the market is changing and there are many changes happening. People are moving around, commissioning editors are all moving around, and all of that is going on in the background. But at the end of the day as long as you’re making programs for children and not for a commissioning editor, you know you’re going to always have the edge on what children want to watch.”

The Brown Bag principals believe these are exciting times to be making animation. “There are shows being made that are breaking so many rules and catering to all sorts of tastes,” says O’Connell. Adds Gaffney, “The market has really just expanded with all the streamers coming on. It’s really interesting to look at public service broadcasters up against technology companies that are on the stock exchange and they’re both doing the same thing in that they are both commissioning animations. So it’s a really interesting dynamic to see. It’s also a wonderful time if you’re a child and you’re a consumer of content, because you’re literally getting spoiled with all the avenues to get the best animation ever made!”

The duo also emphasize that doing great work has always been their mantra at Brown Bag. “Over 25 years, is to make the best animation we could possibly do,” says Gaffney. “That’s something I don’t see changing in the short term or long term.”

For more info about the studio, visit www.brownbagfilms.com 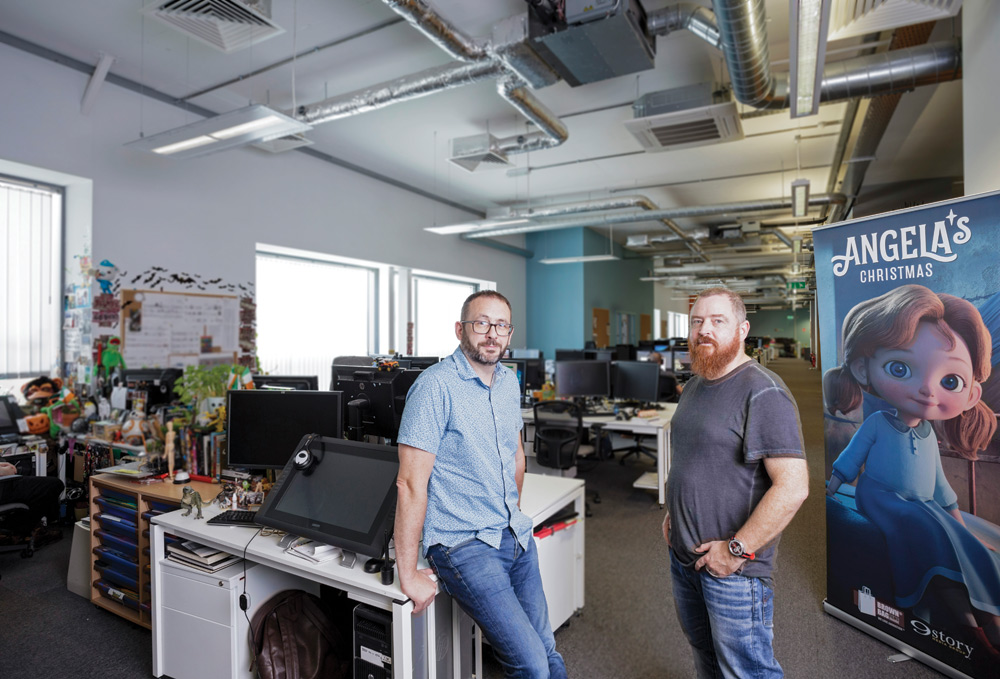 O’Connell: Jimmy Murakami was someone we looked up to so much when we were starting out. Jimmy was a real gentleman and was so kind in introducing us to people at Annecy and other places. He was a great mentor in our early years and we miss him a lot.

Gaffney: Brad Bird’s Iron Giant recently celebrated its 20th anniversary. I remember watching when it was released, and when I look at that film I always learn something new. It’s beautiful. I suppose you’re always a student of animation. It’s very hard to pick a person, going to events Annecy, where you see hundreds of producers and animators, it’s nourishment that you need. If you really care about animation, going to events like those and just meeting hundreds of enthusiastic animators, that to me is better than any one individual.

O’Connell: “Be prepared for it to take time for you to become known. Keep showing up at festivals and markets and keep on working. Don’t expect immediate success and don’t give up: Persistence will get you there eventually.”

Gaffney: “If you want to do it, do it. When you work for yourself that creative entrepreneurship is something that needs to be encouraged at every level. I think it’s extremely fulfilling, it’s also extremely difficult, but if you feel that it’s something you want to do, I strongly encourage it. I would say just do it because there’s no nugget of advice you can give, because there’s a million challenges that are going to face you. Jump in, close your eyes and give it a whirl.” 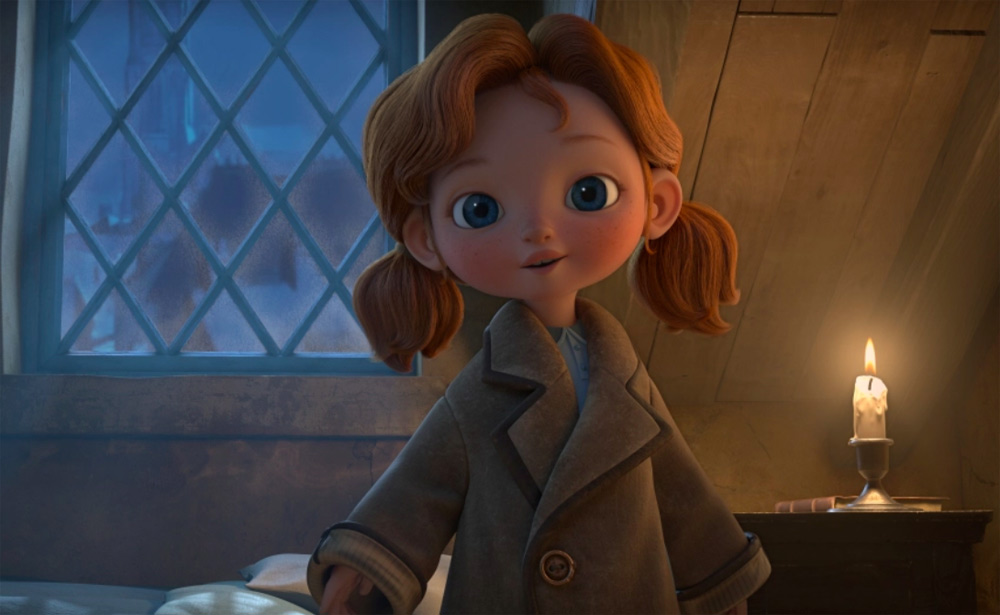