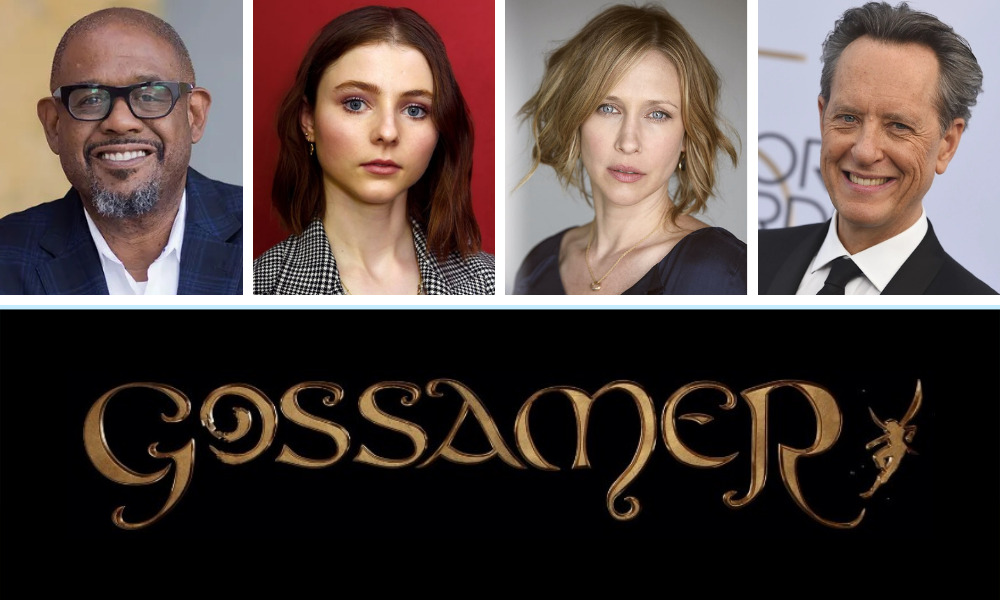 Gossamer is based on the young adult novel by critically acclaimed author Lois Lowry (The Giver, The Willoughbys). Written by Crystal Meers and directed by Azazel Jacobs and Heidi Bivens, the series takes children and adults on a fantastic journey through the world of dreams
and nightmares.

Littlest One is an in-training ‘Gossamer,’ a fairy who is a dream giver. Each night she and her teacher, Bertrand, visit Vera, a human selected for dream receiving, who lives alone with her dog, Toby. For a Gossamer, part of dream giving, is also gathering “fragments,” which are memories that lie within important objects in a gossamer’s human counterpart. Once gathered, these fragments are used to make fantastical dreams.

When Vera takes in Frankie, a foster child with a troubled and complex past, Littlest One is poised to help Frankie find happiness through her dreams, but her spontaneous and sometimes wreckless approach to dreamweaving, opens up a darkness within frankie. This darkness is consumed by the Sinisteeds, the terrifying centaur-like creatures that create nightmares.

Can Littlest One protect Frankie from the Sinisteeds? Or will Frankie be trapped in the darkness forever?

One of Lowry’s more daring novels, this is the first time the critically acclaimed book will be adapted to the screen. This marks the second Lowry novel BRON is adapting, following The Willoughbys animated feature, which premiered on Netflix.

“We are extremely excited to bring yet another one of Lois Lowry’s properties to life. Gossamer is not only a reimagining of the fairy genre but a real story about relationships and trust,” said Jason Chen, EVP BRON Digital.

Gossamer will be powered by Unreal Engine which enables an international team of artists across multiple disciplines to iterate and collaborate in real-time with an accelerated timeline and repurpose the digital animated assets such as characters, environments, props, tools, etc. to create online worlds, communities and interactive games.

“By using Epic Games’ Unreal Engine as the backbone for creating our vast and immersive worlds, creative and technology have never been so effectively woven together,” Chen noted. “Our BRON Digital teams across the globe, paired with an incredible voice cast and the direction of Heidi and Aza, have truly taken words from the page and have translated them into a stunning Movie Series that new audiences will want to escape back into time and time again.”

Added Miles Perkins, Unreal Engine’s Business Director for Media & Entertainment. “Using Unreal Engine for Fables, and now for Gossamer, BRON is transforming production pipelines, taking advantage of the creative freedom to approach animation just as they would for any other project, animated orlive-action. BRON is empowering a diverse range of storytellers who are bringing new ideas to the market and delivering some of the most awe-inspiring animation projects to date.”

Grammy Award-winning artist and producer Timbaland and his longtime business partner Gary Marella, co-founders of Beatclub, are executive music supervisors of the series and will provide music for Gossamer from Beatclub artists, producers and songwriters.

No release date for the series has been announced.