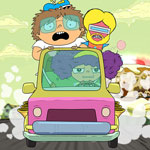 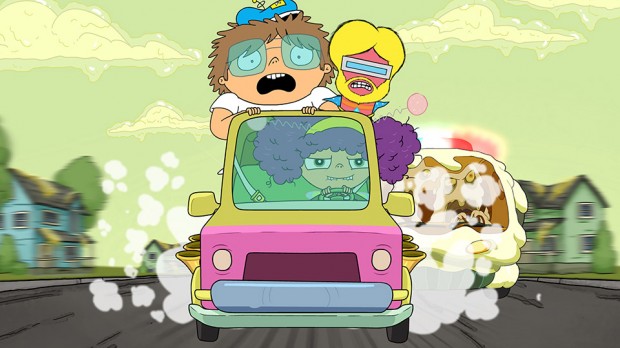 Ryan Quincy ignores the norms of time-travel storytelling in pursuit of character-driven action and humor for Disney XD’s hit Future-Worm!

South Park veteran Ryan Quincy was toying with a time-travel based idea for a new animated series at Disney TV Animation, but kept coming up with the same warning about working in that genre from anyone he pitched it to.

It was that kind of thinking that lead Quincy to create Future-Worm!, an animated adventure comedy about a 12-year-old genius and his invertebrate pal from the future having all kinds of strange adventures across the space-time continuum with little regard for time travel conventions.

“We didn’t want to do what has been done a lot, of going back in time and interacting with historical figures or figuring out who knocked the nose off the sphinx or those types of things,” he says. “We’re very mindful of not doing that type of stuff.”

Viewers got their first look at the show in a handful of shorts that debuted last year, with the full version of the series having premiered Aug. 1 on Disney XD.

“Doing those shorts was great because it challenged me to tell a story in 90 seconds,” says Quincy. “Once we got picked up to series, we brought that over as sort of the foundation: cutting to the chase and just moving quickly. The show is very much about forward momentum, leap before you look kind of stuff, because I think kids really respond to that kind of stuff.”

The success of the shorts informed the show and its “sampler platter” format, as the staff has dubbed it, of each half-hour being comprised of 11-, three- and seven-minute segments.

Quincy came to Disney TV Animation after 14 years as an animation director and producer on South Park and creating the adult animated comedy Out There, which aired for one season on IFC. Much of the appeal of coming to Disney was the chance to make shows he could let his children watch and tapping into his own childhood love of Marvel Comics, Star Wars and The Muppets for inspiration, as well as talking to the in-house brain trust at Disney TV Animation.

Danny Douglas, the genius inventor of the time-travel lunchbox, is based to some degree on Quincy’s own childhood. “When I was in fourth-, fifth-, sixth-grade, I was a little chubby kid and I had glasses and there was a time where I did wear a captain’s hat,” he says. “I had friends and everything, but it would have been just so cool having your own Chewbacca or E.T.”

Future-Worm, meanwhile, began as simple doodles. “I started drawing beards and things on a worm, just thinking, ‘What’s the most ridiculous thing that you would see on a worm?’” he says. The end result is the Future-Worm fans see today, complete with center-parted blond hair, full bulletproof beard, visor, titanium abs and a cape attached via a gem-centered collar.

It was 1980s tough guys such as Hulk Hogan, Mr. T and Chuck Norris that informed Future-Worm’s personality, as does voice actor James Adomian. “It’s just fun to think of this tough guy worm on this little kid’s shoulder, like a bodyguard Jiminy Cricket who always had your back,” he says.

Future-Worm’s origin was briefly covered in one of the shorts: Danny (voiced by Andy Milonakis) sent his time-travel lunchbox into the future with his lunch inside it. When future scientists find the box containing an apple with a worm in it, they use a genetic escalator on the worm to create Future-Worm and send him back to Danny.

With those characters set, the rest of the series came together rather quickly. “The underlying thing about the series is it’s about acceptance and Danny’s family doesn’t question that he hangs out with this worm and goes on these time travel adventures,” he says. “It’s all just accepted.”

The format does require a lot of stories — Quincy says they need more than 60 to fill all the slots for the show’s first season — meaning there’s a lot of world building going on and the cast of characters has expanded rather quickly.

Among the cast: Robo-Carp, one of Danny’s less-successful inventions; the purple haired human-size fairy Bug (voiced by Jessica DiCicco); Danny’s parents, Doug and Megan (voiced by Quincy and Melanie Lynyskey); and Steak Starbolt, star of Danny’s favorite in-show cartoon show (voiced by Jonathan Frakes). Additionally, scientist and educator Neil DeGrasse Tyson plays a version of himself, appearing from time to time as a wise mentor, a la Obi-Wan Kenobi.

“Some of the three-minute segments are like a Steak Starbolt episode, and you won’t even see Danny or Future-Worm in some of these,” says Quincy, who draws on his South Park experience in coming up with secondary characters that can carry their own episodes.

Most of the pre-production work on the show — writing, character and prop design, backgrounds, storyboarding — is done at Disney TV Animation in Burbank, with animation done at Titmouse’s Vancouver studio.

Future-Worm presents an interesting character animation challenge, by nature of his design. “Not only does he not have any arms, he doesn’t have any eyes,” says Quincy. “He can do things with his tongue and things with his tail but it’s been challenging. I think everyone’s excited about animating him and posing him.”

For a show that started out as a time-travel pitch, Quincy says the biggest surprise in making the show so far was that the characters are strong enough to not always need that idea.

“We have such a diverse cast and these characters can just do stuff in their back yard or in Bug’s junk yard — there’s enough locales and environments that they can just do adventures there and you don’t have to go back in time or ahead in time,” he says

For the Love of the Art
Daily News Bytes