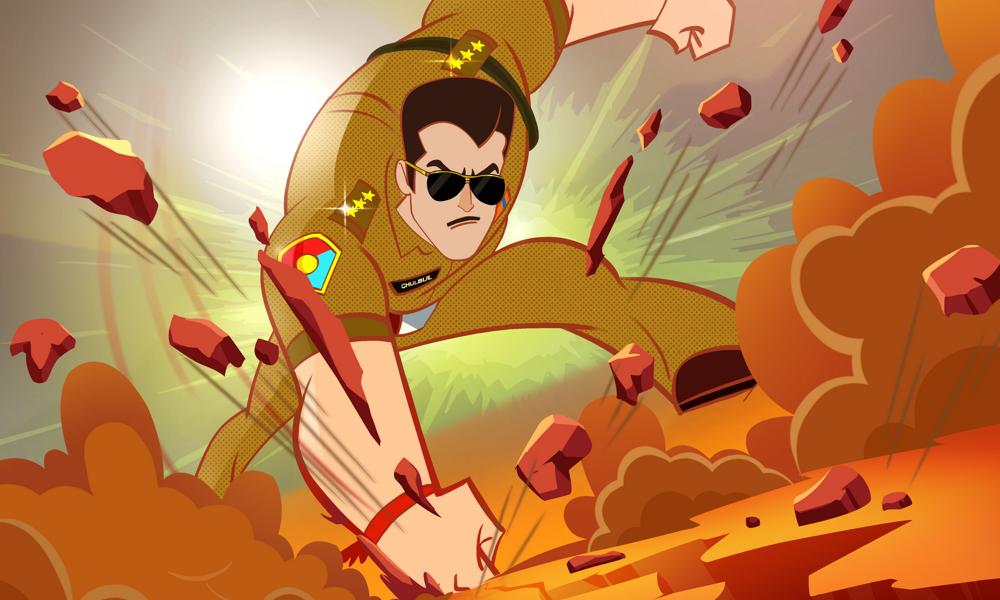 Leading India- and Singapore-based animation studio Cosmos-Maya has signed a deal with Arbaaz Khan Productions to adapt its blockbuster Bollywood cop movie franchise Dabangg into an animated series. In a first of its kind animation adaptation of a Bollywood franchise, the lead actor (Salman Khan) will play his adult character, rather than being turned into a child avatar.

Cosmos-Maya is producing two seasons of 52 half hours. Targeted at a kids and family audience, season one will be produced this year with season two in production in 2021.

The three Dabangg films have grossed more than INR 7 billion (USD 92.3 million) worldwide, making it one the most successful Bollywood franchises of all time. The films have also rated well on TV and Digital platforms:Dabangg garnered an astounding TRP of 9.2 when it premiered on TV.

Salman Khan is a popular celebrity around the world, and children are one of the most significant contributors (directly and as influencers) to his box office and TV numbers. The animated series aimed at these young fans promises audiences all-out entertainment, and with action-comedy sequences, larger than life characters, and with gadgets straight out of a Bond movie, there is something for everyone.

The series chronicles the day to day life of Police Officer Chulbul Pandey (Khan). Backed at each step by his entourage, he stands in the face of evil to keep the city safe. Fighting evil is a tough job, but whatever the situation may be, Chulbul always has the time to lighten up the mood with his jokes, limericks and one-liners. Chulbul is joined by his endearing younger brother Makkhi (played by Arbaaz Khan in the films), who is new in the police force and who keeps trying to emulate him.

The Cosmos-Maya adaptation will feature the animated avatars of all the franchise’s iconic characters, including the three antagonists Chhedi Singh, Bachcha Bhaiya and Baali; Rajjo (played by Sonakshi Sinha in the films), Prajapati Ji (played by the late Vinod Khanna in the films) and the “BhaiyaJi Smile” guy.

“Dabangg’s biggest USP is that it is complete family entertainment, and so the next logical step to further grow the franchise was to enter the animation space. The medium offers unparalleled creative freedom with storytelling, and we can focus on shorter standalone stories in lieu of longer, linear narratives,” commented Arbaaz Khan. “Chulbul’s persona is larger than life and in animation his adventures will be showcased as never seen before. We are very happy to be working with Cosmos-Maya on this glorious franchise which has won the heart of millions. The union has been organic in the sense that the franchise and the studio have both captured the pulse of the Indian masses with entertaining grassroots level storytelling and relatable narratives. Exciting times lie ahead.”

Anish Mehta, CEO of Cosmos-Maya, added: “We are delighted to be partnering with Arbaaz Khan Productions in this historic merger of Bollywood and animation. As a trendsetter in the industry, Cosmos-Maya is, for the first time ever, bringing a major Bollywood franchise to animation with the adult protagonist being portrayed as an adult. With more and more content viewing platforms shifting their onus to animation, a medium which can adapt itself beautifully to all narrative formats, people of all ages are becoming more accepting of the medium which has traditionally been associated with kids’ viewing. With never seen before animation quality and responsible, Bollywood inspired storytelling, it will be our endeavor to further extend the reach of this iconic brand so that more kids, teenagers and families are engaged and entertained.”