Disney Channel has unveiled the first teaser trailer for the upcoming 2D animated adventure Tangled: The Series, premiering on air in 2017. The spot launched online Friday morning, ahead of its broadcast during the premiere of live-action Disney Channel Original Movie The Swap at 8 p.m.

The teaser shows Rapunzel, Eugene (a.k.a. Flynn Rider), Pascal the expressive chameleon and Maximus the no-nonsense horse reuniting for the TV show. Tangled: The Series is set between the events of the 2010 feature film and the 2012 theatrical short Tangled Ever After, and follows as Rapunzel gets acquainted with her royal parents, her kingdom, and the people of Corona.

So, the first big mystery raised by the trailer is: How did Rapunzel get her luxurious (and magical) blonde locks back?

Mandy Moore and Zachary Levi are both reprising their roles as Rapunzel and Eugene for the show. Disney Channel sent out this very sweet photo taken of the stars during a recent voice recording session in Burbank, posing with an Audio-Animatronics Pascal created by Walt Disney Imagineering. 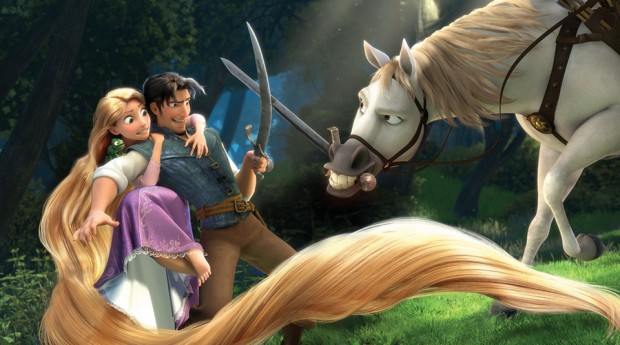 You may also like...
Related Topics:Disney Channel, Mandy Moore, Rapunzel, Tangled Ever After, Tangled: The Series, The Swap, Walt Disney Imagineering, Zachary Levi