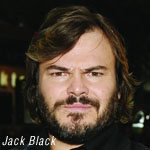 The comedy series is written by Ali Rushfield and is about a group of mean junior high school girls.

Black and Rushfield are executive producers on the project, along with Electric Dynamite president Ben Cooley and the company’s TV executive Priyanka Mattoo, Variety says.

Electric Dynamite is set up at Reveille, which is backing the show along with 20th Century Fox TV.

You may also like...
Related Topics:Animated Comedy, Black, Fox