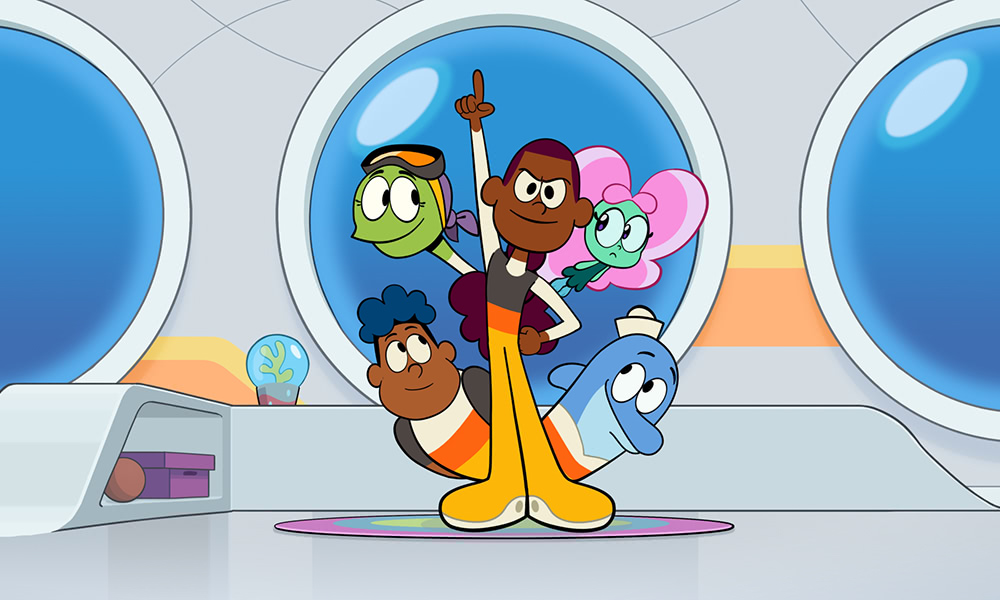 When show creator Gyimah Gariba started putting together his upcoming series Big Blue, he knew that he wanted to inspire kids of all backgrounds with the stories and he decided to tap into his own relationships with his siblings.

Gariba’s main characters are Lettie and Lemo, two underwater adventurers who lead the crew of the Calypso through the kind of wild challenges you might expect in an episode of Star Trek — but underwater, animated and packed with hilariously corny jokes. Lettie is based on Gariba’s own older sister, who was always the leader of the other siblings. Lemo is a science-minded kid who is determined to make discoveries — even when his projects fail he never loses hope. They’ve also got a toddler-like creature named Bacon Berry with them. The playful result is a landscape full of the conflicts and love that the Ghanaian-Canadian creator found in his own home while he was growing up.

He says one of his favorite aspects of the show is the non-verbal character, Bacon Berry. “I really wanted to have a non-verbal character as part of the crew, which is like a very difficult thing to write for,” he recalls. “So, a lot of writers tend to prefer not to have non-verbal characters. It’s very easy for them to disappear in the background. Bacon Berry was the kind of glue to the team because she helps it feel like these are kids hanging out on a ‘kid’ level.” 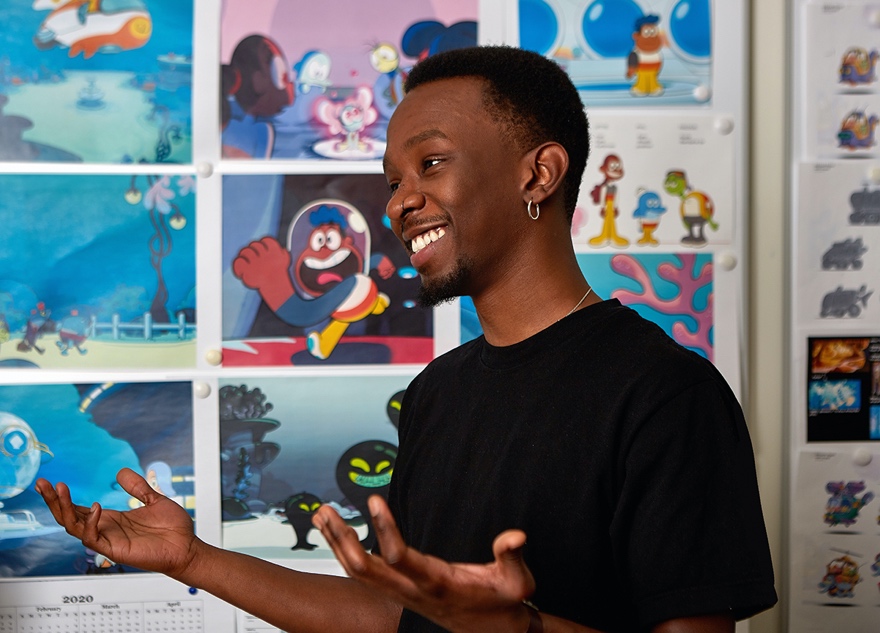 Gariba says his parents would always make sure that he and his sister spent time with his younger sibling, and that always added to the fun. “If you’re not paying attention to them, they can get themselves into a number of sticky situations that are always really crazy,” he notes. “’Bacon Berry’ was something that my younger sibling said all the time, actually, when they were younger and trying to work out how to talk. My younger sibling would pick up words like ‘bacon’ and ‘berry’ and then just say them together. It was one of the things that they would say, like, constantly — so, as soon as the show trailer started premiering and they saw all the stuff they were like, ‘Wait, I used to say that.’”

Lettie is voiced by Bahia Watson (The Handmaid’s Tale) and Lemo is voiced by Kevin Duhaney (Power Rangers DinoThunder). As the audience follows these two characters on their adventures, they also see two kids of color fearlessly forging ahead into the sea as they try to battle unusual underwater creatures. Sometimes there’s a type of monster we may all recognize on the beaches and in the oceans. In the show he’s called “The Big Bad Blegh,” but we know him by another name. 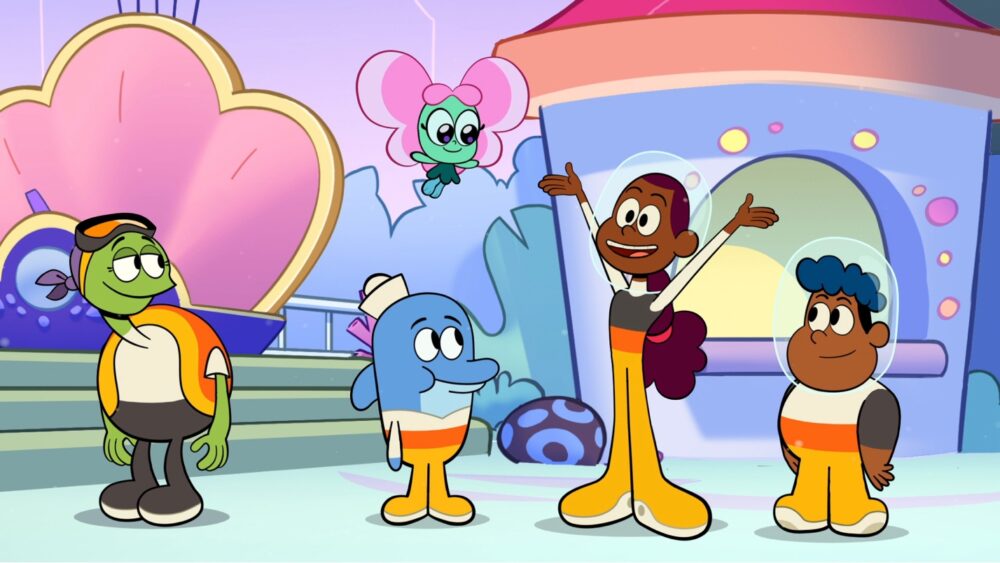 “He’s basically an oil spill,” says Gariba. “I think around that time there was a point in the news where these weird oil spills were popping up everywhere. It was pretty unexplained. And I felt if there was going to be a villain in the underwater realm of things, it would be an oil-like sludge. It’s literally a huge obstacle. So, I thought that would be an appropriate enemy.”

He says the Blegh character was included to raise awareness about a good versus bad example of people’s relationship to their environment. “The show is just a really simple way to talk to kids about what it looks like when you care for your environment, and what it looks like when you neglect it,” he notes. “It’s also about what it looks like to band together with your friends to do something about it. It was really important for me to have the kids be the heroes of the show, just to show that it’s possible for them to make a change just by caring about each other.”

The 2D animated show is made with Harmony 20 and Photoshop and each episode consists of two 11-minute stories. Guru Studio in Toronto and Big Jump Entertainment in Ottawa produce the animation. Overall, a team of about 50 people created the first season. Like so many productions, they did a great deal of work remotely during quarantine. 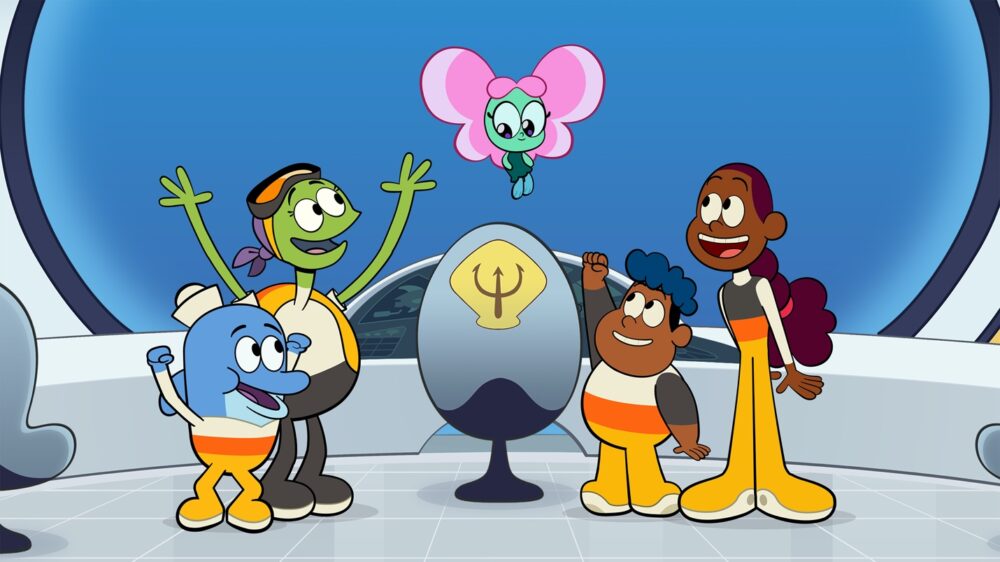 “We spent a lot of time developing Lettie and Lemo and their characters and their interactions,” says Rachel Marcus, Guru’s vice president of creative development. “We got there in the script, but what really made it work was when Riccardo [Durante] came on board. And, as a director, he started to really build out those sibling interactions, the way that Lettie and Lemo relate to each other in the scenes.”

Marcus says the dynamic of the quick banter between Lettie and Lemo was quite important. “There’s a little bit of infighting, just because siblings fight. That was really important to us,” she points out. “We didn’t want to talk down to kids and have everything be calm and easy all the time, because kids have siblings or friends. We’re hoping that when kids watch the show they see the good and the bad and that sometimes you don’t get along with your sibling for a moment. But, then you work it out and you do get along with them again. It’s part of a real relationship.”

Big Blue was originally pitched in late 2015 and then an animated demo was created in 2016. Development continued on after that and the show premiered on Canada’s CBC Kids in December, complete with an original theme song created by Grammy-winning music producer Timbaland. 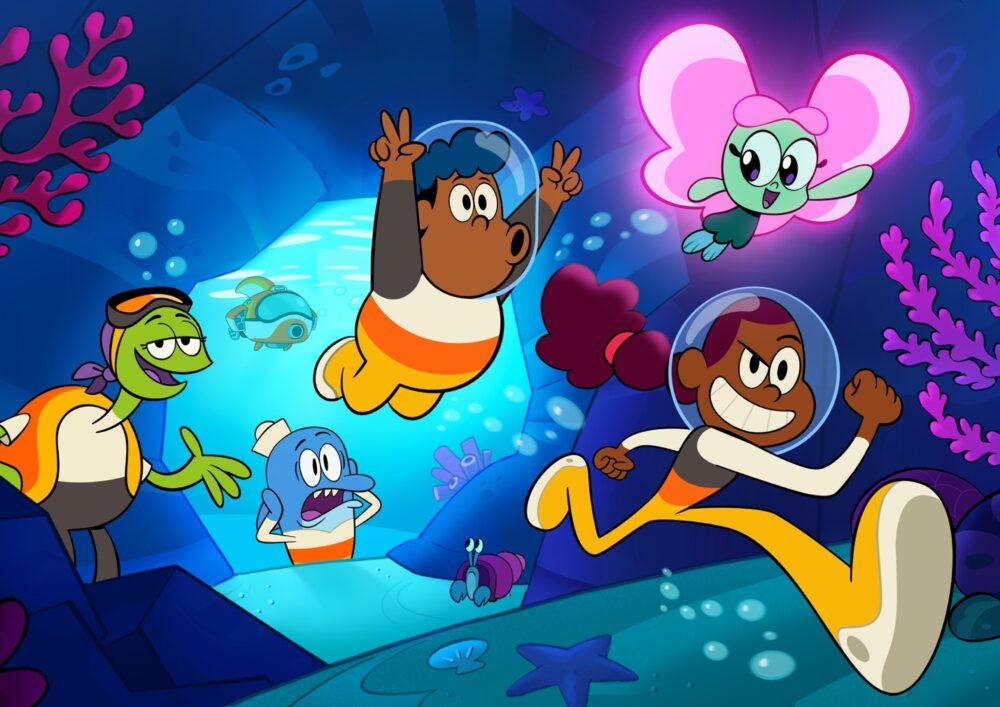 Like Marcus, Gariba was thrilled to work with Durante. The first-time show creator found inspiration in working with him. “This is the first show that I’ve created, that I’ve seen from inception all the way through to production,” says Gariba. “So, Riccardo really served as an amazing mentor for me. He was such a generous expert to have there working with us. He has worked on Disney shorts and feature films and done so much in animation. I’ve only worked in TV animation. This is the first big big project that I’m at the helm of, and he was really adamant at every point of squeezing jokes in whenever possible, on every level.”

Gariba also hopes that his work sets off something in another little kid who sees his show and then decides to work in animation. He remembers the films and shows that inspired him. “I think I was watching The Incredibles and I was just blown away by how the characters felt like real people,” remembers Gariba. “My mom was talking about animated characters like they were actual people and I just thought that was amazing and I had to go make animation so I could make people feel that, too.”

Big Blue premiered on Canada’s CBC in December. It’s also available to stream on CBC GEM and airs on Nickelodeon in the U.K., ABC ME in Australia, CTC Kids in Russia and NRK in Norway.