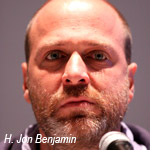 Get ready for the most off-beat animation crossover of all time, as the FX series Archer is set to collide with the Fox hit Bob’s Burgers.

The thread that ties the shows together is voice actor H. Jon Benjamin, who told EW.com that he’ll pull double duty as both Bob and Archer in the episode. The cross-over will occur on an episode of Archer in the FX series’ upcoming fourth season.

Benjamin described the crossover to the site: “It’s like a Bourne Identity-type plotline. It starts off with Archer as Bob, making hamburgers, but he doesn’t know that he’s Archer. He’s at the restaurant and these, like, I think Russian thugs come in, and Bob dispatches them expertly. And then he’s like, What just happened? How did I do that? So he has to try to figure out why he’s so good at killing people.”

The idea was pitched by Archer creator Adam Reed, with Bob’s Burgers creator Loren Bouchard blessing the idea and leaving the Archer crew to its own devices.

Benjamin has a long history with Bouchard, having worked with him on Dr. Katz and Home Movies.