The second season of eOne Family’s Ben & Holly’s Little Kingdom has begun its weekday run (7.15 a.m. and 5.30 p.m.) on Nick Jr. UK. Thirteen more episodes from season two will be broadcast on the channel at the end of the year. Channel 5’s Milkshake! will also air the second series this fall.

Ben & Holly’s Little Kingdom will also be featured on Nick Jr.’s coveted ‘Star of the Week’ slot on July 30th, which airs back to back episodes of popular shows on the channel. Nick Jr. is supporting the launch of new episodes with advertising on ITV Daybreak, CiTV, Cartoonito and Boomerang and a digital advertising campaign on CBBC catch-up, Milkshake, Facebook and Wild tangent.

eOne Family will be actively promoting the new series broadcast with a digital media and experiential marketing campaign titled ‘Ben and Holly’s Magic School’ with initiatives running throughout fall. eOne will also launch its own Star of the Week Facebook app competition at the end of July to tie-in with Nick Jr.’s similarly titled broadcast slot. The competition will encourage fans to upload a magical Ben and Holly inspired video. Each week the winning entry will be crowned Star of the Week and receive Golden Bear’s new Toadstool toy as a prize. At the end of September the best overall video will win a VIP prize package combining tickets to the new stage show with the opportunity to appear on stage at one of the performances.

The launch of new episodes follows recent news announcements for Ben & Holly’s Little Kingdom which underline eOne Family’s commitment to the growth of the licensing program. Blues was recently appointed apparel licensee for the brand, a live stage show tour was announced for 2012, the first app launches this Summer and the brand was unveiled as the official charity partner for this year’s Jeans for Genes Day nursery schools campaign. 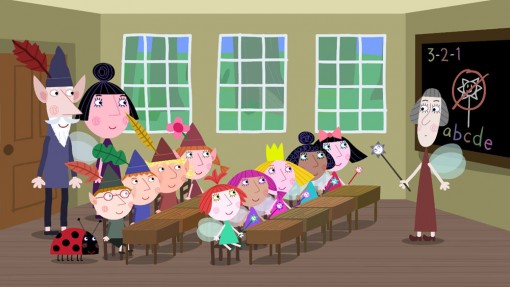 Created by Mark Baker and Neville Astley and produced by Phil Davies, the 11-minute long series is set in an enchanted magical kingdom with fairies, elves and insects. It first debuted in the U.K. in April of 2009. It is broadcasted across Nickelodeon’s 43 international channels throughout Africa, Asia-Pacific, Europe, the Middle East and Latin America.