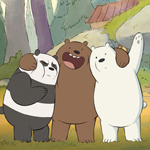 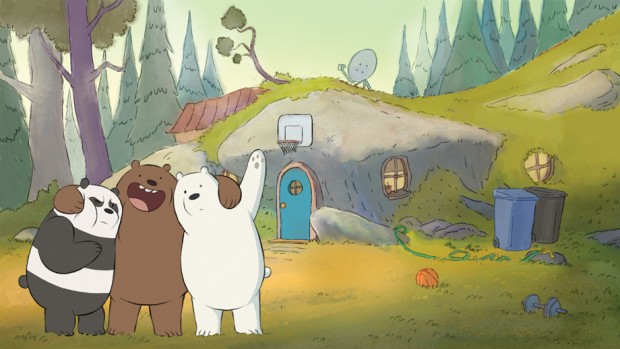 It’s hard enough to find happiness in this modern world as a person, so imagine how much harder it would be if you were a bear — even a bear that can navigate social media. That’s the idea behind We Bare Bears, a new original animated comedy series debuting July 26 on Cartoon Network.

Created by Daniel Chong, an Annie-winning storyboard artist on animated features including Bolt, The Lorax, Despicable Me 2, Toy Story of Terror! and Inside Out, the series is producing a first season of 26 11-minute episodes through Cartoon Network Studios in Burbank.

The most-recent show to have been developed through Cartoon Network Studios’ global shorts program, We Bare Bears features the voices of Eric Edelstein, Bobby Moynihan and Demetri Martin as the bear brothers: Grizzly, whose extreme enthusiasm frequently goes too far; Panda, a social media addict who cannot be without his phone; and the stoic Ice Bear, who speaks of himself in the third person and acts with samurai-style precision. The three of them get around via “bear stack,” in which they literally stack themselves three tall and walk around the city.

“Nobody really freaks out when they see them, … but they are kind of a nuisance and people aren’t super kind to them,” says Chong. “They just kind of deal with being outsiders in our world but they are slightly more accepted than usual.” 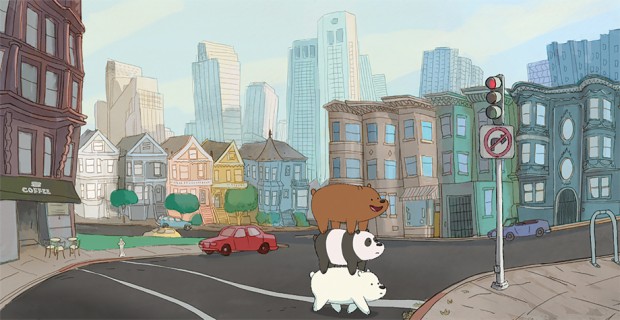 The series began as a web comic Chong created as a favor for a friend, who posted in on a website he was running. When the comic got a good response, Chong started making more of them and successfully sold Cartoon Network on the show while pitching projects around town.

Bring some of the best elements of animated features to the show was one of Chong’s primary goals in creating and pitching a TV series. “I had ambitions that the show could have characters that felt very substantial and had a weight to them and that you could just follow them emotionally in a big way,” he says. “I definitely work with the writers a lot and try to get it right. We’re tying to make a show that just feels a little different than what you normally see on TV.”

Chong says he’s adjusting to the speed of TV production. “The pace is just ridiculously fast,” he says, adding he spent two years working as a storyboard artist on Inside Out, which hit theaters just a month ago, before starting work on We Bare Bears. “In TV, you can’t second-guess yourself too many times and you just have to be very committed to the direction.”

One of the benefits of working in TV and in the quarter-hour format is that good material is almost never wasted. “You always have so many ideas but you have to discard so many of them because they don’t play into the bigger whole of the story,” Chong says. “The really gratifying thing about working in TV is that you get to say everything you want to about these characters. You get to tell every little adventure about them, whereas a movie is a little bit more limiting.”

As a storyboard artist himself, Chong says he appreciates the story telling abilities they bring to the writing process. Like many Cartoon Network Studios comedy series, the show begins with a four- to five-page outline that the storyboard artists then figure out how to execute as an 11-minute animated show.

Chong says incorporating them into the process from the start expands the show’s creative resources. “We obviously don’t have the budget to hire tons of writers … but we have these story artist who are just amazing minds and creative visual thinkers,” he says. “We involve them in our story meetings and whenever we have a writing block or we want some feedback, we call a story meeting and everyone gets together and we all work together to come up with the best solution.”

Invested in the Work

That also invests the storyboard artists in the work and motivates them to execute the story to the best of their ability. “They have input into what they eventually will be storyboarding and, as a storyboard artist, that was always valuable to me when a director made me a part of that process,” Chong says.

The look of We Bare Bears is naturalistic and more in line with Chong’s comic-strip and Aardman influences than most CG animated features.

“I didn’t want anything to have hard edges; I wanted things to feel soft, I wanted it to be natural and I wanted it to feel like there was real media involved, even though it’s digital,” says Chong, who grew up watching The Wrong Trousers and Peanuts shorts and reading Calvin and Hobbes, The Far Side and Garfield. “And so our art director (Tony Pulham) found this way to give a watercolor-y feel even though we’re working in computer and it’s begging to just be very linear and very flat.”

Chong visited Annecy to debut the show at the French town’s famed animation festival and will follow that up by presenting it directly to fans at Comic-Con — all before the show airs on Cartoon Network.

That would be a bit of a terrifying prospect for Chong if making the show didn’t keep him so busy that he has had little time to think about it. “All I’m thinking about is the next episode that we’re doing,” he says. “I’m sure it will hit home once people start talking about it or my family members or friends start seeing it but right now i haven’t really had time to digest it all yet.”

You may also like...
Related Topics:Bobby Moynihan, Bolt, Cartoon Network, Daniel Chong, Demetri Martin, Despicable Me 2, Eric Edelstein, Inside Out, The Lorax, Toy Story of Terror, We Bare Bears

No Holding Back
Into the Great Wide Open