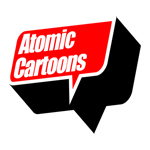 Vancouver-based Atomic Cartoons is growing its slate of hybrid offerings and is now in production on its first preschool TV series, Nico Can Dance!, which will be headed to broadcast partners BBC Kids and Knowledge Network this fall. The 65 x 2 show will combine traditional 2D animation and a live-action host with the goal of encouraging kids to be active.

Created by Rachel and Rafael Franco and developed and produced by Atomic, Nico Can Dance! will showcase a “fantastical world of nature and color” where the live-action host (played by Rachel Frost Franco) teaches cartoon cat Nico how to dance, while their own movement creates the world around them. The multiplatform series, which Atomic plans to build with related apps, is based on Franco’s previously developed dance curriculum for children.