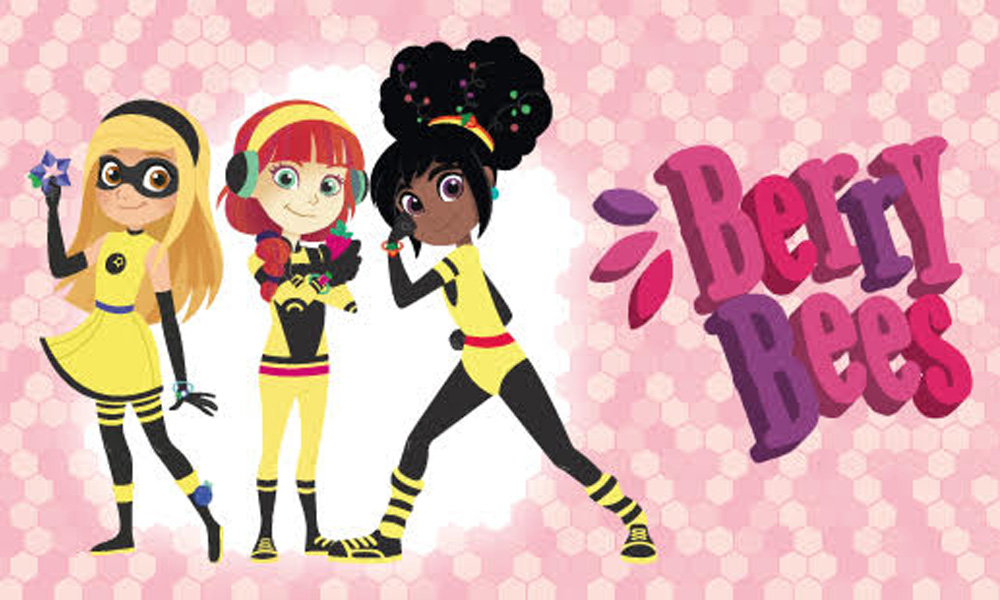 Italy’s Atlantyca Entertainment, Australia’s SLR Productions, Ireland’s Telegael and Singapore & India’s Studio Cosmos-Maya announced at MIPCOM the co-production of a “buzz-kicking” new 52 x 11’ minute animated spy-action series, Berry Bees. The global partnership and production will be distributed worldwide by Atlantyca, with Cosmos-Maya distributing across Asia, SLR Productions handling Australia and New Zealand, and Telegael distributing in Ireland and U.K. The series will be presented at MIP Junior and MIPCOM with the series’ stunning first art and trailer.

Synopsis: Who says adult spies should have all the crime fighting fun? Ready for action, Berry Bees is 33% savvy spy smarty-pantsing, 33% LOL hilarity and 34% buzz-kicking action. That’s 100% KFTW (Kids For The Win) entertainment. A high-energy, hilarious, spy show with all the right ingredients featuring three extraordinarily talented 10-year-old girls named Bobby, Lola and Juliette. Seemingly ordinary school-age children who have been selected by the B.I.A. (Bee Intelligence Agency) for those special spy missions in which only child agents can be used. Together the girls are known as the Berry Bees.

When the world’s top-secret villains unleash their mayhem and the Berry Bees are summoned, Bobby, Lola and Juliette become mistresses of disguise, secret undercover agents, astute mentalists and rad martial arts experts who use awesome berry-themed gadgets to help them save the day. They’re all unique individuals, but their ability to act as one, confounds even the most devious adversaries. The Berry Bees always have each other’s backs and always share a lot of laughs. They aren’t just a spy team, they are best friends. Whenever adult agents are too old to find a way, our kid spies are summoned to save the day.

“We are so happy to be working with such a noteworthy multicultural group of production partners on this new exciting action-packed animated series which features three extraordinary strong young heroines,” said Caterina Vacchi, Head of Animation and Distribution Department, Executive Producer, Atlantyca Entertainment. “This multi-partnership reflects our combined commitment to creating brands that have enormous global TV and licensing potential. Berry Bees is full of fun stories and gadgets that kids are certain to adore. We are thrilled to have key broadcast partners on board, honored to be working with RAI once again and excited to add the NINE Network in Australia as our newest broadcast partner.”

“Berry Bees is a powerful and innovative property, funny and fast-paced, based on characters that will be loved by girls and boys,” said Luca Milano, Executive Director of RAI’s kids’ group, Rai Ragazzi. “We are confident that brilliant and experienced companies like Atlantyca and the other international co-producers will make Berry Bees the new spy-action animated series for children that the public and the markets are waiting for.”

“I am excited to be working with such highly talented and creative co-production partners. Buzzing with fun, action and awesome crime fighting adventures there is no doubt that the Berry Bees will entertain audiences. SLR Productions is delighted to work with the NINE Network and RAI once again,” said SLR Productions CEO and Executive Producer, Suzanne Ryan. “We look forward to being the Australian premiere broadcaster for Berry Bees. With the right mix of action and comedy centred around the lives of Bobby, Lola and Juliette, the series is guaranteed to appeal to Australian audiences. We can’t wait for Berry Bees to buzz onto the NINE Network,” said NINE Network Co-Head of Drama, Jo Rooney.

“We are extremely excited to introduce young audiences to our fun, fierce and fearless heroines, Lola, Bobby and Juliette,” said Paul Cummins, CEO at Telegael. “We bee-lieve in producing quality programming for children with strong role models and Berry Bees is a show we are immensely proud to be involved in. The power of friendship is fundamental to the success of our extraordinarily talented trio of undercover spies. In like manner, Telegael’s valued relationships with highly accomplished and skilled co-production partners such as SLR Productions, Atlantyca Entertainment and Cosmos Maya allow us to co-produce culturally diverse shows that are as beautifully crafted as they are action-packed.”

“Berry Bees has the right blend of entertainment & empowerment for its audiences and we at Cosmos-Maya are rather excited to be part of this culturally diverse & rich co-production partnership with Atlantyca Entertainment, SLR Productions & Telegael,” said Ketan Mehta, the Promoter & Co-founder of Cosmos-Maya. “With such esteemed & established partners from across the world, Berry Bees truly embodies the spirit of a global project & I’m confident that it will resonate with the girls & boys worldwide.”