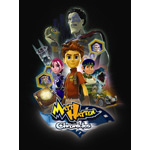 The series is an original production for Nickelodeon U.K. and Teletoon Canada, and has global distribution from Endemol Worldwide.

Matt Hatter Chronicles is an adventure-comedy series about Matt, an ordinary boy who discovers his family defends a gateway to a different dimension called the Multiverse. To save our world and the Multiverse, Matt must battle and capture infamous villains from movie, myth and legend.

“We’re excited about our partnership on this ground-breaking series” says Arc’s Head of Production, Matthew Teevan. “It allows us to showcase diverse CG capabilities and apply the same love and care we put into our movies into this stunning TV franchise.”

“Arc is now recognized as a global leader in the animation and visual effects sector,” says Nigel Stone, CEO, Platinum Films, “They are the perfect partner as they continually prove they can deliver high-end and successful content whether it’s for film, TV or online. Matt Hatter is the first chapter in a long-term relationship we hope to develop with Arc Productions.”