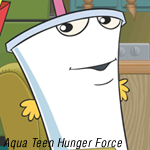 The producers of the Adult Swim series Aqua Teen Hunger Force have announced the series will change its name after 100 episodes. ATHF was one of the original series to air on Adult Swim when the block launched in 2001.

The series returns May 2 and will debut the new name with the episode airing May 8.

The show also will feature a new theme song written and performed by Joshua Homme of Queens of the Stone Age and Alain Johannes.

Here’s the full details, courtesy of Meatwad himself: