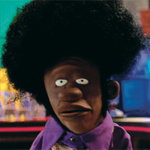 Apollo’s Pad has made the jump from edgy webseries to late-night cable in Canada.

The series, produced by Lenz Entertainment and Galleon Entertainment, has been picked up by Teletoon to run on its Teletoon at Night block aimed at older teens and adults.

Eight episodes have been produced especially for television. The series was created by Len Dunne and Stephen Green and developed by Jason Hopley. Jack Lenz and Dunne are executive producers.

The puppet-based series debuted April 10, and is set in a neighborhood bar run by Apollo, a self-proclaimed good guy and god of disco looking to make some money and meet some ladies. The cast includes Apollo’s son, Ice Flow, a British ex-rocker named Mickey, wannabe rapper Sno Flake and a cougar on the prowl named Angel.

“Guided by the creative trails blazed previously by shows like South Park and Family Guy, Apollo’s Pad pushes the boundaries of comedy to its limits,” says Lenz. “We are thrilled that this property has migrated from web to on air.”

Apollo’s Pad is a joint venture between Canada’s Lenz Entertainment and U.K.’s Galleon Entertainment.  The series was shot entirely in Toronto.

‘Rio’ Ready to Party at the U.S. Box Office
New Trailer for U.S. Release of ‘Mia and the Migoo’