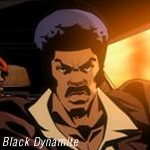 Adult Swim is ready to explode — with Black Dynamite!

The network has picked up a new animated series based on the acclaimed live-action feature film.

The new half-hour series will premiere in the spring of 2012 and will continue the exploits of Black Dynamite and his crew from teh feature film.

Under the direction of Carl Jones (The Boondocks), the series features the voice talent of Michael Jai White, Tommy Davidson, Kym Whitley and Byron Minns, all of whom starred in the feature film.

For fans who can’t wait that long, Ape Entertainment has just released the new comic book Black Dynamite: Slave Island. The comic is written by Brian Ash, with art by Jun LoFamia and colors by J.M. Ringuet. Based on a story by Michael Jai White,Byron Minns and Scott Sanders, the 48-page comic is due to arrive in comics shops this month.