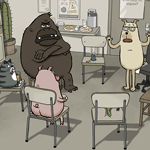 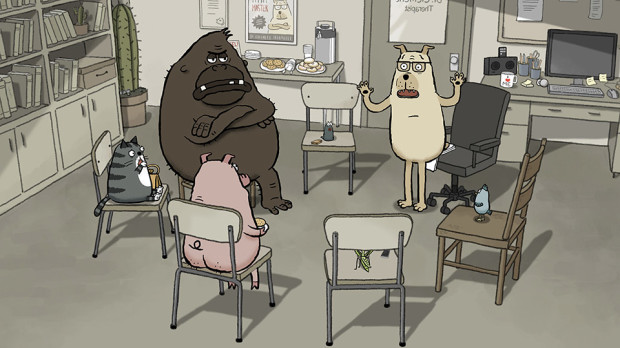 Being a psychotherapist can be a tough job when you deal with human patients. But life is even more of a headache when you’re dealing with a praying mantis with relationship problems, a pig with an eating disorder, a bird with guilt issues, an obsessive-compulsive cat, and a leech with separation anxiety. That’s the fun and quirky premise behind Animal Behaviour, the latest short by the Oscar-winning team of Alison Snowden and David Fine. Of course, things get really hairy when an ape with anger management problems joins the weekly therapy group.

Snowden and Fine, who have been working together since they met at U.K.’s National Film and TV School in the ‘80s, began thinking about exploring the short form again after working on various TV project together. “We bumped into Michael Fukushima, and we thought it would be fun to do a short project, which involved hands-on writing and directing,” recalls Fine. “So, we came up with the idea, and Michael, who is our producer at the National Film Board of Canada, really liked it.”

Snowden says she has always been interested in therapy and was once part of a confidence-building team session at a community center many years ago.  She recalls, “We had to hold up a mirror and tell ourselves ‘I love you!’ I always thought group therapy situations are inherently funny as they bring different people together in one room.”

Fine says he was also interested in the broader notion of whether people should accept each other for who they are. “These animals have these characteristics, but at what point do they have to take responsibility for their actions?”

“I love Pixar’s work, but at the same time, you can get tired of seeing the same CG look. That’s why it’s so great to see independent 2D films like The Breadwinner continue to keep the tradition alive.”

The Vancouver-based husband-and-wife team, who are best known for their 1993 Oscar-winning short Bob’s Birthday and acclaimed Comedy Central hit series Bob and Margaret (1998-2001), used TVPaint to produce the animation for the short. “We had to learn the software,” says Snowden. “But the user forums were so helpful. We would post a question and, sometimes within minutes, we would get the answer. There’s a real passion for 2D animation there, and they provide a great community of support.”

From Series to Shorts

Fine and Snowden, who also created the series Ricky Sprocket: Showbiz Boy and worked on Aardman’s Shaun the Sheep series, enjoyed diving back into the world of animated shorts for this project. “We enjoyed working with other artists and writers, but you sometimes have to compromise a little bit when you are doing a TV show,” says Snowden. You can’t always do what you want to do, but for a short, it’s our own thing although we did consult with other animators and filmmakers.”

One of the challenges on Animal Behaviour was that it’s all set inside the dog therapist’s office.  As Fine explains, “We thought it would be easier, but it was difficult because all the characters were different sizes. We had to get some crazy angles to make it work, and we’re not brilliant with perspective. So, we used some software to make a 3D room, so we could turn it around and find the right camera angles for the shots.”

Of course, we have to ask them the golden question about the delicate art of working with your spouse! “We talk about the ideas and pick the characters we like to work on,” says Snowden. “I do more of the designs, and we both animate.”

“Show everything with a sense of humor. Don’t get bogged down with too many complications. Storyboard it well and stick with it.”

“What is nice is that we’d be working on a scene, and Alison is right here and could just open it on the computer and work on it further,” says Fine. “I would have final call on it if it was one of my characters. We don’t always agree on everything, but we share the same sense of humor. If we have differing views on something, I have to figure out a way to convince her that my idea is right, so that we both like it.” Snowden says, “Mostly it’s the small details that we talk about. We usually agree on the general things.”

After 38 years, Snowden and Fine have found a wonderful way of living and working together harmoniously. “We met each other in film school, and we started working together on Alison’s student film right from the start,” notes Fine. “We’ve met a lot of couples who tell us that they could never work with their wives or husbands, but we think it’s quite fantastic.” (Their daughter, Lily, who voiced Peppa Pig as a young girl, is also an artist.)

The couple say that it’s great to see 2D animation continuing to be popular in both the TV and feature landscapes. “I love Pixar’s work, but at the same time, you can get tired of seeing the same CG look, that’s why it’s so great to see independent 2D films like The Breadwinner continuing to keep the tradition alive. When we came out with Bob’s Birthday, The Simpsons was huge, and our short became a pilot for a TV series for adults, and we have seen this huge expansion for that audience.”

As final words of advice to young animators, Fine says it’s very important to find the time to make a little short that you can put out there and show it to people. “It shouldn’t be about technique, even if it’s three-minutes long, don’t lose sight of the story and characters,” he says.  “Alison’s student film was based on a simple gag, but it had heart, and that’s why people were touched by it.”

Snowden adds, “Show everything with a sense of humor. Don’t get bogged down with too many complications. Storyboard it well and stick with it.”

Animal Behaviour will screen at Annecy in the short film competition. For more info, visit nfb.ca.