Heath Kenny, the recently appointed creative director of the French studio, discusses the 2009 slate and plans for increasing the company’s global profile.

Last year, French animation studio Alphanim, home of Galactik Football, Robotboy and Hairy Scary, tapped animation veteran Heath Kenny as creative director to act as the link between management and the creative team at the studio. Kenny, who has worked as director on Robotboy, has an impressive background as an animator with Expresso and Passion Pictures in the U.K.

Founded in 1997 by CEO Christian Davin, Alphanim (now a Gaumont subsidiary) has a diverse slate of shows in the pipeline. ‘This year our development slate is focused on action/comedy, adventure and some preschool projects,’ notes Kenny. ‘We are also in the process of completing a very exciting project that represents our growth in the production of feature films with the directing talent of Dominique Monfery and artistic vision of Rebecca Dautremer.’

With new shows such as as Gawayn, Matt’s Monsters, Pok & Mok and the recently announced co-pro with Canada’s Muse, Alfred Hedgehog, Alphanim continues to redefine its brand. ‘We like to see the Alphanim slate as positive, fun, high-level and creative-driven content,’ says Kenny. ‘By allowing the room for people to grow and express themselves artistically we are rewarded with projects that are engaging and fresh. France has a long established graphic culture and has produced many exceptional talents over the years. Now with the Internet and global media exposure we have young artists arriving with a solid understanding of Anglo-Saxon popular culture. This combined with our established mix of international talent has created a kind of cultural melting pot. This not only allows us to bring something different in what we produce but also in the way we produce shows.’

Kenny is happy to see animated projects such as Nick’s The Mighty B! and Cartoon Network’s Ben 10 succeed in the marketplace. ‘I admire The Mighty B! for the palpable creative force behind this really positive and funny show, as well as its animation timing, design, music and writing. Yo Gabba Gabba! is a real breath of fresh air in the world of preschool animation, while Ben 10 engages its audience with fantastic simplicity. By creating a central character that really drives the action, it allows every kid with an ounce of imagination to tap their wrist and transport himself or herself into the world of Ben 10. Creating this kind of portal through which kids can dive into the world of a series is a key ingredient to every really successful show.’ 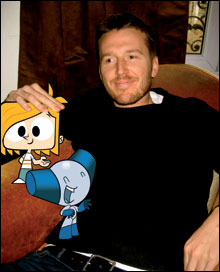 Like many creative people working the field today, Kenny says he’s thrilled to see the widening definition of an animated series. ‘The perception has really been blown wide open in the last few years, and as a result, we are finding ourselves in the fantastic position of being able to try things that once would have had no place to air,’ he offers. ‘The bar has been raised in terms of the expectation of quality content; the challenge for everyone now is to step up creatively.’

The growth of French animation studios such as Alphanim has gone in hand with the boom in schools such as Gobelins and Supinfocom and events such as Annecy in the country. ‘I think it is partly a result of a different cultural attitude to the art form of animation and partly due to the fact that there is now a more open forum for different types of animation to be screened,’ adds Kenny. ‘Ever since I first came to France the level of individual artists and their commitment to their art form has amazed me. We have many artists, writers and storyboard artists who continually produce their own projects individually or collectively. This is why it’s so very important for us to create an environment of growth and opportunity at Alphanim.’

When it comes to staying competitive in this demanding field, Kenny believes that it’s not enough to simply provide service work or hope for acquisition-based partnerships. He says the ability to listen to the needs of broadcasters and bring creative solutions will always hold a company in good stead. ‘Watching animation is certainly no longer limited to television, and it’s possible to imagine that 10 years from now television will be just one part of a wider interactive portal for communication and entertainment,’ he predicts. ‘The one thing that will remain the same is as long as we continue to produce quality entertainment, there will always be a place for it.’