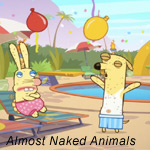 Almost Naked Animals has been picked up for a 12-episode third season.

Canada’s YTV and Cartoon Network both have picked up the new episodes of the series, produced by Toronto-based 9 Story Entertainment.

Almost Naked Animals (52 x 22 mins.), produced and distributed by 9 Story, launched on YTV Canada in January 2011, on CiTV UK in April and ABC Australia in May. The series had its U.S. premiere on Cartoon Network in June, and was quickly picked as one of People Magazine’s top children’s shows to watch. The series also recently launched on Canal+ France, Disney Channel in Italy and Latin America, NPO in the Netherlands and Super RTL Germany. In November, Almost Naked Animals hit the #1 series on CiTV.

“We couldn’t be happier with the success of Almost Naked Animals and the tremendous support it has received from YTV from the very beginning,” said Vince Commisso, president and CEO of 9 Story Entertainment. “It’s gratifying to see the momentum building behind both the show and the licensing of the brand.”