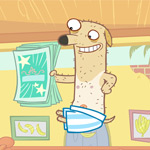 All 40 episodes of 9 Story Entertainment’s hot new animated series Almost Naked Animals have been acquired by U.K. outlet CiTV. The toon, which premiered on the channel last month, will also air on ITV Breakfast this fall and on Cartoon Network in the U.S. later this year.

Created by Noah Z. Jones, who is also behind Disney’s Channel’s hit series Fish Hooks, Almost Naked Animals follows the adventures of a group of wild and free-spirited animals who run a beach-front hotel like kids at summer camp.

“We are excited to be working with CiTV to bring this hilarious animated series to young audiences in the UK,” says 9 Story Entertainment’s president and CEO Vince Commisso. “Almost Naked Animals’ wonderful cast of humorous characters is a perfect fit for CiTV. We look forward to working together to build a loyal following for the show.”

Here’s a recent clip from the series: