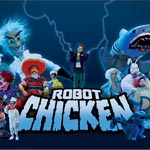 Adult Swim announced its new slate of programming for the 2011-12 season recently during its annual Upfront event in New York City. While many of the new series are offbeat live-action comedies, there are still plenty of good news for animation fans, including the premiere of a new Venture Bros. Special and new series titled Tight Bros. and Black Dynamite. The cabler has also reupped  popular show such as Robot Chicken, Metalocalypse, Mary Shelley’s Frankenhole, Superjail!, Squidbillies and Aqua Teen Patrol Squad 1 (retooled version of Aqua Teen Hunger Force).

Here is the official press release detailing all the new original series, specials and returning shows:

NTSF:SD:SUV::—NTSF:SD:SUV:: (National Terrorism Strike Force: San Diego: Sport Utility Vehicle), is a clandestine team of government agents working together to protect San Diego from numerous terrorist threats coming in daily from such evil countries as Mexico, Canada and Guam. This team of highly trained operatives has only one job: saving your ass so you can drive your Prius and see your movies in 3-D without worrying about living in a country run by no-good terrorists. As with many other acronym-ed police procedurals that dominate the airwaves, NTSF:SD:SUV::’s season of 15-minute episodes is ripped from the headlines and full of suspense, action, drama, cliffhangers, yelling, passionate love-making, more yelling, death and plenty of pregnant pauses. NTSF:SD:SUV:: is created by Paul Scheer and stars Scheer, Rebecca Romjin, Rob Riggle, Kate Mulgrew, Brandon Johnson, June Diane Raphael, Martin Starr and S.A.M., the first sentient robot on television. Paul Scheer and Jonathan Stern are executive producers.  Curtis Gwinn is co-executive producer. Series premieres this summer on Adult Swim.

The Venture Bros. Special: From the Ladle to the Grave: The Story of Shallow Gravy. See the Venture Family as you’ve never seen them before: in a 15-minute documentary-style animated special. Follow the meteoric rise, the equally meteoric fall, and the decidedly un-meteor-like second coming of the most important band Hank Venture, Dermott Fitctel and H.E.L.P.eR. robot have ever been in: Shallow Gravy. If you’re hungry for rock, then open wide, because here comes a ladle of heavy metal fire and metaphoric meat drippings. Launched on Adult Swim in August 2004, The Venture Bros. is an inspired spoof of 1960s action cartoon shows such as Johnny Quest. Created by Jackson Publick III (King of the Hill, The Tick), the 30-minute animated series follows the bizarre misadventures of the Venture family. The Venture Bros. Special—From the Ladle to the Grave: The Story of Shallow Gravy premieres July 24 on Adult Swim.

The Heart, She Holler is a new live-action soap opera about folk who ain’t never used soap or seen an opera. It’s a satire on the emotional Hee-Hawification of America, set in a town so inbred, the folks have become almost supernaturally wrong. The series is produced by PFFR, and stars Patton Oswalt and Heather Lawless. The Heart, She Holler premieres this fall on Adult Swim.

China, IL. Frank and Steve Smith are brothers who teach in the history department of a state university in China, Illinois. They also happen to be legends in their own minds who will often sacrifice facts, lessons and syllabi for the sake of being awesome. Created by Brad Neely, executive produced by Brad Neely (Creased Comics) and Daniel Weidenfeld and produced by Titmouse, Inc. (Metalocalypse), China, IL premieres this fall on Adult Swim.

Tight Bros. Tight Bros is a new animated comedy that follows two moronic “clergybros” who are on a quest for fat beats, hot chicks and tricked out cell phones. Vince and Aaron were called by God to spread a holy message: one of peace, love and tearin’ up the club. By day the two sell religious kitsch at a kiosk in Viceroy Del Sol mall. By night they hunt for babes, but only with mega tans and super smooth waxes in place. Premiering in the spring of 2012, Tight Bros is created and written and executive produced by Sam Johnson and Chris Marcil.

Aqua Unit Patrol Squad 1—The series formerly known as Aqua Teen Hunger Force is one of the most popular and longest-running original series on Adult Swim and has been retooled for glory and renamed Aqua Unit Patrol Squad 1. Show creators Dave Willis and Matt Maiellaro, felt that after 100+ episodes, they really didn’t like the name. Now Frylock, Master Shake, Meatwad and their smelly neighbor Carl appears under a new banner and new theme song, which was written, composed and performed by Joshua Homme (Queens of the Stone Age) and Alain Johannes. The closing theme shred guitar performance is by co-creator Maiellaro. The cast also does a lot of the things they’ve done over the past 10 years: look for a new place to put their stuff, pay rent, make gut-wrenching decisions and talk about life while sipping herbal tea. Aqua Unit Patrol Squad 1 premiered May 8 and continues every Sunday at 11:45 p.m. (ET/PT) on Adult Swim.

Children’s Hospital. Children’s Hospital is an award-winning facility where happy and healthy children are looked after by doctors who deeply care about them and the overall well-being of their community. That whole sentence was a lie.  Childrens Hospital is created by Rob Corddry (Hot Tub Time Machine, The Daily Show with Jon Stewart) and produced by Abominable Pictures, distributed by Warner Bros. Television and features an all-star cast. The series is based on the Webby Award–winning digital series that debuted on TheWB.com in 2008. In Season 3, Corddry is again joined by a cast of comedic geniuses, including Malin Akerman, Lake Bell, Erinn Hayes, Rob Huebel, Ken Marino, two-time Emmy® winner Megan Mullally and Henry Winkler. Childrens Hospital also won a Comedy Award this year for best Sketch Comedy/Alternative Comedy Series. Season 3 returns to Adult Swim on Thursday, June 2 at midnight (ET, PT).

Delocated. Delocated is a live-action 30-minute comedy series from creator/executive producer and star Jon Glaser with co-executive producers Vernon Chatman, John Lee and Alyson Levy. After testifying against the Russian Mafia, “Jon” and his family are uprooted and start living undercover through the witness protection program. After existing quietly in an anonymous suburb, “Jon” accepts an offer for the family to participate in a reality show based on their lives. Season 3 of Delocated premieres in the spring of 2012.

Eagleheart. The live-action comedy Eagleheart, starring Chris Elliott, debuted on the network in 2010. Elliott returns in season 2 as U.S. Marshal Chris Monsanto along with cast members Brett Gelman and Maria Thayer. Every episode of Eagleheart promises violence, suspense, intrigue and copious amounts of needless bloodshed as Marshal Chris Monsanto blindly kicks, punches and shoots his way to what may or may not be a legitimate solution to his case. Created by former Late Night with Conan O’Brien writers Michael Koman and Andrew Weinberg, Eagleheart is produced by O’Brien’s Conaco Productions and Dakota Pictures. It is executive produced by Koman, Weinberg, Jason Woliner, Troy Miller, Tracey Baird, David Kissinger, Conan O’Brien and Jeff Ross.  Richard Schwartz is the co-executive producer.

Mary Shelley’s Frankenhole. Moral Orel creator Dino Stamatopoulos returns to Adult Swim in the spring of 2012 with season 2 of the stop-motion animated series Mary Shelley’s Frankenhole. This is the true story of Victor Frankenstein—the world’s most narcissistic genius—and his various attempts to become recognized as the great creator/scientist that he believes himself to be.

Metalocalypse. From creators Brendon Small and Tommy Blacha, the fourth season of the animated series Metalocalypse premieres in the spring of 2012. The series chronicles Dethklok’s crusades into darkness and their exploitation as the world’s most popular metal band and most significant cultural force.

Mongo Wrestling Alliance. The Wrestler meets Metalocalypse in this story of the once great Kleberkuh Clan. Back-stabbing smoking ring sluts, villainous mutants and pile-drivers from the top of great big ladders—it’s all in a days work for young Rusty Kleberkuh who is determined to restore his family’s name in the treacherous and deviant world of professional wrestling. Created by Tommy Blacha (Metalocalypse co-creator), Mongo Wrestling Alliance premiered season 1 part 1 in January. Season 1 part 2 premieres Sunday, June 19 at midnight (ET, PT).

Robot Chicken. Robot Chicken uses stop-motion animation to bring pop-culture parodies to life in a modern take on the variety/sketch show format. The Emmy Award-winning series began airing in February 2005 and remains the top-rated original series on Adult Swim. Robot Chicken is created and executive produced by Seth Green and Matthew Senreich under their Stoopid Monkey Productions, in conjunction with Alex Bulkley and Corey Campodonico’s ShadowMachine Films. Green and Senreich also executive produce, write and, with Chris McKay, direct the series, with Green providing many of the voices. Season 5 part 2 premieres this fall.

Squidbillies. The inbred squid-things of Dougal County return for a fifth season of hillbilly shenanigans in the spring of 2012. The squids won’t disappointify you, as long as you like bank robbing, drug trafficking, unskinny bopping, and guest appearances by bona-fide famous people. Squidbillies premiered on Adult Swim in October 2006 and is from creators Dave Willis (Aqua Teen Hunger Force) and Jim Fortier (The Brak Show), both Georgia natives. Willis and Fortier worked as writers and producers on Space Ghost Coast to Coast.

Superjail! In April the hit series Superjail! slammed back in general population for a second season of destruction and continues to premiere on Sundays at midnight (ET, PT) on Adult Swim. Double the insanity. Double the crazy. Double the pain of being kicked in the guts really hard. Superjail! returns to Adult Swim with ten new episodes produced at Titmouse Studios in N.Y. Series creators and executive producers Christy Karacas (Cartoon Sushi, Robotomy) and Stephen Warbrick (Beavis and Butthead, Daria) teamed up again to take this over-the-top animated series to the next level. Chris McCulloch (The Venture Bros.) returned as a consulting producer this season and lent his talents with story editing and voice-overs.

Untitled project with Odd Future Wolf Gang Kill Them All 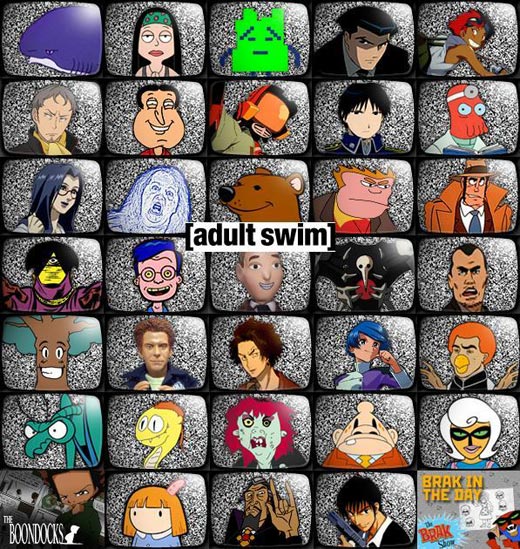