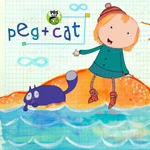 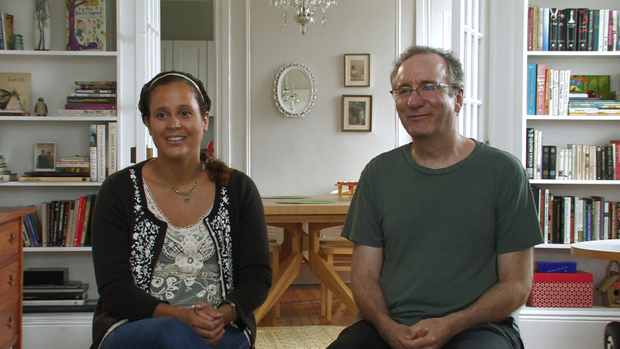 Those who foolishly believe that math is a boring subject will definitely change their minds this fall after they catch even one episode of the new animated show Peg + Cat. This charming PBS series, which is created by Billy Aronson (Rent, Postcards from Buster) and Jennifer Oxley (Little Bill, The Wonder Pets!) certainly knows how to deliver its dose of foundational math concepts and skills with the help of charming characters, imaginative storylines and catchy songs that parents and children will find hard to get out of their heads.

In each episode of the series, which premieres on PBS Kids with a special one-hour broadcast this month, the show’s main characters–a bright, resourceful girl named Peg and her cat, Cat–visit different locations (a farm, an unknown planet, a pirate island, a prehistoric valley, etc.) and come up with ways to solve problems through perseverance and various math-inspired concepts.

Aronson and Oxley began working on the show about three years ago, responding on a request from PBS VP of children’s programming Linda Simensky to develop a math-themed show. Aronson and Oxley, who had met working on the acclaimed Nick. Jr. preschool show The Wonder Pets!, brainstormed some ideas and that’s how the initial idea for Peg + Cat came to be.

“The show clearly makes the point that math is a pretty handy thing to know, teaches different math concepts in each episode very effectively and makes me laugh every time. I think it’s because it has such well-developed funny characters and storylines.”
— PBS VP of children’s programming Linda Simensky

“When we were looking for math shows for preschoolers, we knew the biggest challenge we’d have would be finding a show that was able to handle a math curriculum and also be incredibly funny,” says Simensky. “It’s hard to do either, but doing both seemed impossible. But Peg + Cat does it—the show clearly makes the point that math is a pretty handy thing to know, teaches different math concepts in each episode very effectively and makes me laugh every time. I think it’s because it has such well-developed funny characters and storylines.”

Finding Math in Every Corner

“Jennifer and I had both worked on a lot of different shows that had messages about teamwork and friendship, but it’s always hard to bring math into the mix,” says Aronson. “But our goal was to make math very relatable to kids. Our point was that math is everywhere. You don’t have to be in the classroom—you can be on a purple planet or in Cleopatra’s Egypt—math can help you anywhere you go!”

Animation insiders will also get a kick out of the fun visuals of the show, which incorporates simple designs with smart visuals and a quirky, D.I.Y., hand-drawn feel. As Oxley explains, “I knew I wanted the look of the show to be grounded in material that kids have at home–paper, pencil–so I got some graph paper and glued it down as the backdrop, and it just felt right. Then we put infinity signs in the clouds, and even higher-level equations like e=mc2 in the backgrounds.”

Oxley and Aronson are based in New York, but the bulk of the show’s animation is handled by Toronto’s 9 Story Entertainment, the award-winning studio which also produces the animation for Daniel Tiger’s Neighborhood, Arthur and Wild Kratts, to name a few. The character designs, the rigging, key backgrounds that establish the worlds, the library of character movements, etc. are created in New York, and the team at 9 Story handles the rest of the animation, using art that is scanned in the computer and finished in Photoshop.

“Peg + Cat also has an unusual, handmade look that makes it stand out,” adds Simensky. “The hand-painted backgrounds and amazing color styling give the show a very different look. The design is deceptively simple and appealing, and we’ve noticed that when kids watch it, they immediately try to draw the characters.”

Music also plays a huge role in each episode of the show. Aronson, who came up with the original idea for the huge Broadway musical Rent, and has worked on numerous animated shows such as Beavis and Butt-Head, Postcards from Buster, The Octonauts and The Wonder Pets! points out, “Kids can learn a lot through repetition, and the songs help them remember a lot of the mathematical concepts,” he says. “They can easily retain something like counting backwards from 50 to zero in fives or understanding the definition of horizontal or learning shapes by hearing a song about it. Parents can sing along and enjoy the songs with them until they learn those concepts. Plus, there’s a lot of math in music inherently.”

“Everyday I feel like I’m working on a personal piece of art that I really love. I’m working with so many talented people here in New York City, and it feels like a dream come true.”
— Series creator and exec producer Jennifer Oxley

Oxley says she feels like she’s making personal films with each episode of the show. “Every day I feel like I’m working on a piece of art that I really love,” says the Emmy-winning writer/producer. “I’m working with so many talented people here in New York City, and it feels like a dream come true. We have a lot of fun creating these new worlds that Peg and Cat visit every week. We really try hard to make each one of them look like nothing that we’ve seen before on TV.

“We really have the time of our lives on this show,” chimes in Aronson. “I love creating this universe, and these characters that can go anywhere. PBS is so supportive of what we’re doing here and they give us lots of freedom and support. I also love watching what Jennifer does and all the songs and the great people we work with.’

You certainly don’t need a calculator to figure out that Peg + Cat equals a whole lot of fun for youngsters this fall.