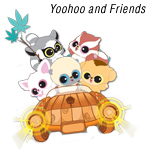 ADC Licensing has landed a broadcast deal in the United Kingdom for its animated series Yoohoo and Friends.

The series is produced and developed by ToonZone Studios and financed by ADC. It is based on a line of popular plush toys created by Korean company Aurora and will air on the CSC Media Group channel “Pop” in the first quarter of 2012.

Created by award winning producer David Feiss (Cow and Chicken, I Am Weasel) and written by award winning writer Thomas Krajewski (The Fairly Oddparents), the show focuses on five furry-tailed heroes on a global quest to save the environment from evildoers and eco-disasters – most caused by them as their former human selves.

The series features the voice of hip-hop star Flava Flav as Father Time.

Catching Up with Past Pitch Party Winners!
New BRB Series to Air in Latin America