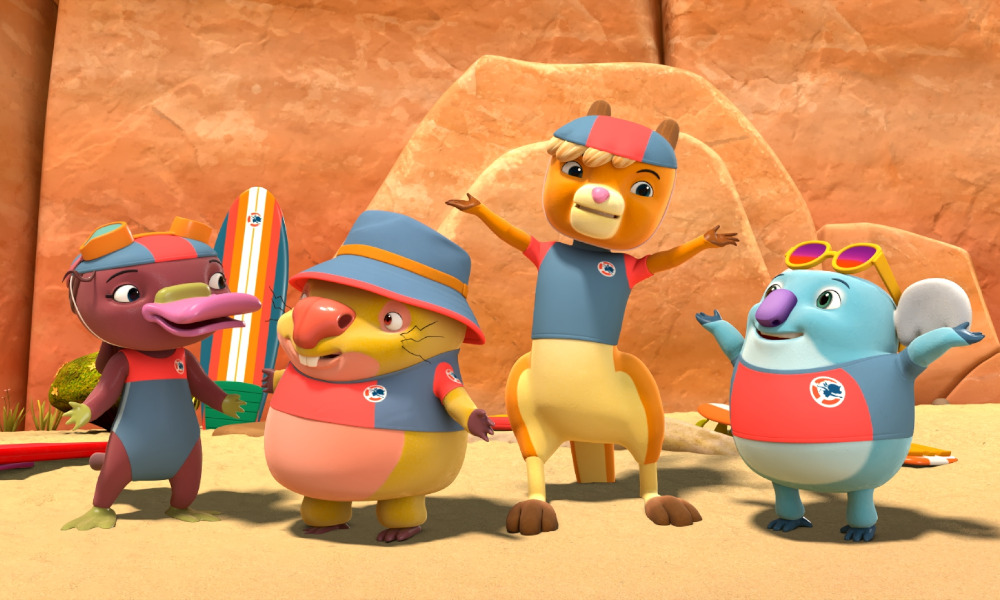 Screen Australia and Cheeky Little Media have confirmed that a second season of breakout Aussie animated series Kangaroo Beach is hopping along. Planning for the new adventures is underway following a greenlight from broadcast partner ABC Kids.

“Kangaroo Beach has quickly become a beloved ABC Kids Brand thanks to the lovable surf cadets who’ve connected via humor and genuine warmth,” said Libbie Doherty, ABC’s Head of Children’s Production. “The distinctive Australian beach setting is a rich storyworld with plenty of fun and action to explore beach culture that is relatable to kids all over the world in the new episodes for next summer.”

The second season will offer further beach-based fun with the four furry lifeguards-in-training, Pounce, Frizzy, Neville and Gemma, and continue to explore new water safety themes for preschoolers and their families. Australian actor & writer Miranda Tapsell (Back to the Outback, Love Child) will also be joining the cast as a guest character.

Key partners onboard for S2 include the ABC, the Australian Children’s Television Foundation and Surf Life Saving Australia. ACTF will also distribute the series. Cheeky Little Commercial continues as the global brand manager.

“We’re so happy to be heading into Season 2 of Kangaroo Beach. Congratulations to the entire Cheeky Little team for making a wonderful show that resonates so strongly with kids and their families,” said Patrick Egerton, Cheeky Little’s Executive Producer. “After the rapid success here in Australia it’s madly exciting to see the show make a huge splash in the U.K., LatAm and beyond. I think 2022 will be a big year for our little lifeguard cadets!”

Since the series burst onto screens in 2020, it’s quickly become a smash hit with its young audience and their families, amassing an average of 1.6 million views* per episode on broadcast TV and ABC iview and securing a top #3 position of most viewed program of 2021 (within both kids and adults’ series). This was in addition to 14.9 million plays** on ABC iview within the past year. The Summer Special released at the end of 2021 drove further success, bolstered by the launch of consumer products, including a book series, kids’ swimwear and clothing, bedding and toys available at major retailers and select independents.

“We are excited to support the second season of this charming, funny and educational series from Cheeky Little Media that has made waves around the world,” said Grainne Brunsdon, Screen Australia’s Head of Content. “We look forward to this series engaging young viewers on the ABC later in the year.”

Bernadette O’Mahony, ACTF Head of Content, added, “ACTF is pleased to be teaming up with Cheeky Little on Kangaroo Beach and to be able to bring this delightful and positive series to the world.”

Season 1 of Kangaroo Beach is currently streaming on ABC iview and the ABC Kids app in Australia.